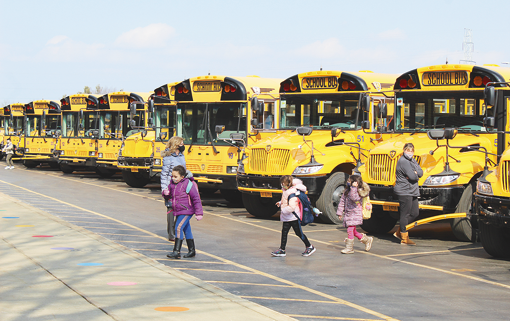 Sidway kids get an extra dose of learning

Sidway Elementary students got an early Christmas present this past Wednesday – an extra half-day of in-person learning.

“For them to come in that day, you could just see the joy on their faces, they were so excited,” said Sidway Principal Denise Dunbar.

While in years past, school kids may have looked forward to the chance for a snow day – or any extra day of – the new Wednesday half-day sessions are a hit with kindergarteners and first-graders, as well as their parents and their teachers.

“So last Wednesday was our first Wednesday, and it went very, very well. Peanut butter-smooth,” Dunbar said. “We were really anticipating difficulties with transportation, and children that didn’t have bus notes or we didn’t know their parents were bringing them, like typically happens on a half-day, and there was very little of that,” she said.

“Kids were so excited to come in, bounding off of the buses. ‘I’m back at school today!’ They were so excited that it was two days in a row, and they haven’t had that in a while. We haven’t been able to say, ‘See you tomorrow’ all year,” Dunbar said.

School Superintendent Brian Graham had a very favorable impression of how the added in-person class time is working at the elementary school.

“I had the opportunity to walk through Sidway on Wednesday to observe our students reporting to school for the half-day sessions. I was very pleased to see our students fully engaged in learning and it was obvious that Mrs. Dunbar and her team did a fantastic job,” he said.

Most Grand Island students learn in a hybrid model that includes a combination of two days of in-person learning, along with three days of virtual learning. A small percentage of the students have 100% virtual learning.

Students are divided into two groups, or cohorts, based on where their surname falls in the alphabet. For example, those whose names begin with A-L attend in-person schooling on Mondays and Thursdays; those whose last names begin with M-Z attend in-person classes Tuesday and Friday. On Wednesday, all students participate in virtual learning online.

Sidway parents had responded favorably in a survey when the idea of an extra half-day of in-person learning was discussed.

“For example, the 6-foot distancing: That has not been eliminated or reduced, so until that does, we cannot put more than maybe 12 children in a classroom – at least that’s the case here at Sidway. There just isn’t the space to spread them out.”

Sidway was chosen for the additional in-person learning because the district and parents felt that the youngest students were most in need of the extra in-person class time at the beginning of their educational journey. The extra socialization can be a plus, too.

“We decided to give it a go at Sidway. Obviously the foundational skills of learning how to read and write – what school is all about – begins here,” Dunbar said. “Having the kindergarteners and first-graders not have that as frequently as we would like them to have is a major concern. This at least gives them one additional contact with school in a week,” Dunbar said.

“It’s not for all three elementary schools, just based on the cost factor. It’s very expensive, as you can imagine, to run that many buses – drivers work a certain number of hours and then they’re eligible for benefits and all of that,” Dunbar explained.

“We’re always looking at ways to try to get kids into school, to try to make this easier for parents. We’re all worried about the fact that kids are not learning as much as they would like them to be. But we also have to keep remembering that’s not just Grand Island, you know, it’s the world that’s going to be addressing some of these lapses in learning that kids have.

“So, in response to a lot of the parents that really want to see kids back in school, we did talk about a Wednesday. We did talk in the summer about having Sidway kids every day, half-a-day, in order to have that daily interaction with teachers.” Although that wasn’t the plan the district eventually went with, the half-day concept was appealing as an extra opportunity.

Dunbar said that for planning purposes, it was a lot easier to have the kids come a half-day than to come every other Wednesday, because that continuity of learning would just not be there.

“If you had A through L the first Wednesday and M through Z on the second Wednesday, what you’ve taught in that extra day on one week would not be the same thing you could teach the next week, because it’s a whole week later,” she said.

“We did know that it would be problematic for kids who are 100% virtual because now they’re not able to see their teacher on Wednesdays because their teacher’s not teaching and cannot be on the screen,” Dunbar said. “So we do have a teacher at each grade level who will pick up those 100% virtual kids on Wednesday and do a live lesson with them. It’s not their regular classroom teacher, but it’s a virtual teacher who’s been hired just for that, and then they collaborate with the classroom teachers when it comes to monitoring progress ... and strengths and needs. So there’s a lot of communication that has to take place.”

Dunbar is proud of how teachers are navigating and adapting the new learning model to make the most of learning opportunities for the kids.

“All of our teachers are doing a phenomenal job in balancing all of this because it’s hard trying to balance two different cohorts, 100% virtual kids, and keep track of those kids who are not logging on and planning every day in school,” she said. “It’s a lot of juggling and it’s been a lot of learning on everyone’s part,” she said.

“I just have been so impressed with teachers. I always thought our faculty was top-notch, but they have worked tirelessly to make this work for kids.”

Dunbar explained that the additional half-day has a lot of pluses for the district’s youngest learners.

“It’s a quick half-day, by the time they come in and get settled. Then they have a 20-minutes special – an art, a phys ed. or a music class – so that they still have contact with those teachers as well,” she said. The teachers pack as much learning as they can in each session. “And then they pack them up and do it all over again in the afternoon,” she said.

And how did the parents react to the very first of the half-day Sidway experience last Wednesday? “Very, very positive,” Dunbar said.

“I had very few parents who had conflicts with transportation or anything like that,” she said. “There’s a handful of parents who have difficulty with child care on Wednesdays.” Some accommodations were made for those families for whom an in-person Wednesday just doesn’t work, such as pairing them with the 100% virtual teacher on Wednesday.

“A couple of parents had a conflict with an older sibling’s schedule, for example, a third-grader needs to be on a Google Meet with their class at 1 p.m., so they can’t be in two places at once to drop off the sibling at Sidway.” However, if they can put the younger child on the bus, then there is no conflict, Dunbar said.

How did the principal feel about the new schedule going into effect?

“I was nervous about it initially because the teachers were losing a lot of their planning time that Wednesday and collaboration, and then [there were] those 100% virtual kids, we were concerned about.”

Dunbar said Sidway has been very successful in maximizing the in-person instruction time for its students.” We have brought many children back to the hybrid model. Our virtual numbers have significantly decreased. We do have the lowest numbers out of any of the buildings in the district.”

At this point, she said, Sidway has about 15 at kindergarten and about a dozen at first grade that are still 100% virtual.