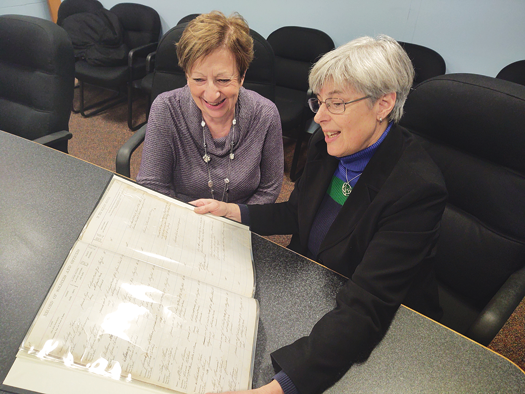 Mary Cooke was attending her first Memorial Day ceremony at the former DeGlopper Park early in her Grand Island political career when an Island resident’s comment sent her on what has become a nearly quarter-century search of Islanders who served during the Civil War in the mid-1800s.

Cooke was standing near the now Killed in Action monument on Memorial Day in 1994 when John Gast looked at the list of names and told the town’s new board member that Islanders who fought and died during the Civil War should be added to the list. Cooke, who moved to Grand Island in 1988, was not aware of the Island residents who fought during the Civil War. However, as a longtime history buff, she became interested in learning more.

The KIA stone monument was an American Legion project and it was moved to its current location at the DeGlopper Memorial from Ferry Village in 1961. Memorial Day services were held at DeGlopper Park that year. The land for the park was deeded to the town by the Grand Island Plaza developers in 1957, and it was officially named “DeGlopper Park” by an action of the Town Board in 1960. The park plantings were a project of the East Park Garden Club and completed in time for the 1962 Memorial Day services. Stores in the plaza opened in 1957, Cooke recalled during a recent interview.

“I did learn the Legion was adamant about the names on the monument as being soldiers who were killed in action. While researching the Civil War, I found out they did not have that designation for those who died,” she added.

Undaunted and anxious to learn more about Grand Island residents who served as Union soldiers during the Civil War, which was fought between 1861-1865, the former town supervisor discovered a hardcover book, created and signed by Town Clerk William Ryken on Sept. 20, 1865, that listed each town resident who fought in the war. The book is safely stored in the Town Hall vault. “I meticulously went through this book, which was handwritten by the town clerk, and it listed every soldier from Grand Island, the date they enlisted and what happened to them,” she explained.

What Cooke found were 69 Island residents enlisted to fight during the Civil War. Upon closer examination it turned out to be 68 residents because John Virgil Bedell served twice. He enlisted in August 1861 and served one year as an ordinary seaman in the Navy and re-enlisted in October 1863 and became a lieutenant in the Mounted Rifle Division of the Army. Adjacent to his name, it reads, “He was mortally wounded on June 27,1864, and died July 8 after taking part in the siege of Petersburgh.” Cooke said he is buried at Whitehaven Cemetery on East River Road. In 1860, Grand Island’s population was 954 and it increased to 1,229 in 1865, meaning 6% of the Island residents fought in the Civil War.

Cooke, who retired from political service in 2015 after serving as supervisor, had put this project on the back burner until she became involved with the DeGlopper Memorial Expansion Committee that will unveil a life-size  statue of World War II hero Charles N. DeGlopper on June 5. Early on, the committee chose to use the event and space as a memorial to all town residents who have served in the military, along with expanded stories of the town’s 18 KIAs dating back to World War I.

As plans were being finalized for the impressive space, Cooke discussed the 68 Grand Island residents who served in the Civil War. The committee has designated a space on the ground, near the DeGlopper statue, that will have engraved stones for each of these veterans.

“We are thrilled to have our Civil War soldiers from Grand Island recognized at this memorial,” Cooke said. “Hopefully, sometime down the road we would like to record the history of these men and put the story on an app for all who visit the park.” Calling it an “absolutely amazing journey,” Cooke and Committee Secretary Elsie Martino, working off copies of the original book, prepared the list of names of Civil War veterans to be engraved on the bricks.

“We labored over many of these names because they were hand-written and in many cases it was a challenge to figure out the letters, but through cross-checking and research we came up with the names,” she said. “We had to get used to how he wrote back then.”

During the 1990s when they were trying to figure out Civil War KIAs, which they gave up on, Cooke sent away to the National Archives to obtain their pension records for more information, which they have compiled.

The entire DeGlopper Expansion Committee learned that George Bartram was Norm Stessing’s relative when Norm attended a DeGlopper Memorial Committee meeting to discuss honoring Grand Island’s Civil War veterans. Stessing is a lifelong Islander who retired from the New York Power Authority and is a member of the town’s Planning Board.

He said Bartram was his mother’s great-great grandfather who lived on the family’s farm on Whitehaven Road, across from what is now a solar park. Bartram enlisted in the Army as a Union soldier on May 3, 1863, and died later that year of dysentery, an infection of the intestines. He was buried in Beaufort, South Carolina. Stessing now owns Bartram’s Cavalry Light Sabre, its scabbard and the buckle from its leather belt. The sword has been passed down through the family.