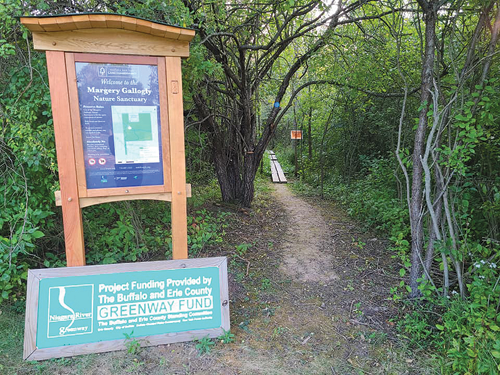 A trail through the Margery Gallogly Nature Sanctuary is part of the trail system, soon to be expanded, that could bring more bikers and hikers to Grand Island for ecotourism.

Ridable loop across Island could be unveiled this spring

Bicycle riders crossing either bridge will soon be greeted by directional signage sending them 12 miles through the South Parkway Bike Path, along the West River or an approximately 6-mile new temporary route through the center of town that will connect the Niagara Greenway Shoreline Trail’s 37 miles from Lackawanna to Youngstown.

The plan was discussed in Town Hall last week with Supervisor John C. Whitney, Board members Pete Marston and Jennifer Baney and Highway Superintendent Richard Crawford joining virtually with Gregory Stevens and Michelle Lockett of the Niagara River Greenway Commission. The Greenway’s plan for the quickest route through town was across Grand Island Boulevard, but the conditions north from the intersection of Baseline Road are not suitable for bike riders, so a temporary path was approved. They also discussed establishing meetings with officials from Erie County and New York state to study ways to make biking along East River Road safer.

“We have long considered Grand Island a jewel in the center of our shoreline trail necklace, but there was no safe route for the Niagara Greenway Shoreline Trail to cross the Island,” said Stevens, executive director of the Greenway Commission.

“Now, working with Supervisor John Whitney and the team at the Town of Grand Island, we are planning two routes to form a safe, ridable loop around and across the Island, and we hope for an unveiling in the spring of 2021,” Stevens said.

Whitney said bicycling is not a fad, but rather a trend, and he looks forward to Grand Island embracing cyclists and hikers who visit the Island.

“We want to promote our Island to these guests and encourage them to stop at shops or restaurants in our business section,» said Whitney, who added that discussions have begun about adding bike racks and benches in town.

“We are going to be working hard with Greenway to get updated trail markings across the Island now and for future paths and trails.”

They all agreed an alternate bicycle route connecting the bridges would work like this: From the South Bridge, cyclists would travel north on Grand Island Boulevard to the intersection of Baseline Road at the DeGlopper Memorial. They would turn right down Baseline Road to Bedell Road, where they would turn left, then turn right onto the Linear Path, following it north to the East-West Park Road, turning left and continuing onto the unmarked bike path that runs parallel to the I-190 and the North Bridge.

They agreed a benefit of this route is that it will bring more cyclists onto one of the many trails on Grand Island and it will also take them into Buckhorn State Park. While the Town and the state Department of Transportation will study the north end of Grand Island Boulevard to make it more bike-friendly, there is potential this temporary route may be permanent. Ideally, Grand Island Boulevard would need to be widened by the DOT to accommodate an off-road cycle track.

Temporary signage concepts for the bike routes will be developed by Greenway’s Carlo Piech, who will work closely with Crawford and the town’s Highway Department on the creation and installation of them. There was also talk of kiosks being constructed to greet cyclists coming off either bridge. The kiosks would outline the bike routes and identify the town’s bike and walking trails, all of which could lead to Grand Island becoming more of an ecotourism destination.

Lockett, Niagara Greenway Commission’s Community Engagement manager, said: “It is very exciting for me as an Island resident, to be working closely with our town supervisor, Greenway and New York State Parks to build up our Island as the eco-tourist hot spot for the Niagara region. Every stakeholder in these meetings knows the value of Grand Island’s natural resources and we are determined to utilize them in the most economical and safe way. Identifying safe bicycle routes to connect our bridges is an important first step in bringing out-of-town eco-tourists onto our Island.”

That is precisely what Jim Sharpe, the town’s chairman of its Long Range Planning Committee, has been advocating since his committee created the town’s Master Plan. “I have been enthusiastic about the Grand Island Long Range Planning Committee looking at the Niagara River shoreline, understanding its role in protecting it and working with state agencies, such as DEC, State Parks and the Corps of Engineers as partners to help us move forward,” he said. “Moving inward and having the Niagara River Greenway Commission take a very serious look at Grand Island and for them to realize this is the center of their universe as far as Greenway because our town has so much to offer, is tremendous.

“I am very optimistic because it sends a clear message with Greenway now engaging in conversations with town officials and it gives us great hope we are being recognized for what we have been doing,” Sharpe added. “With all that enthusiasm and so many different groups involved, I truly believe 2021 will be one of the cornerstones for setting the tone for what Grand Island will do for the next 20 years.”

Baney acknowledged they are not sending riders crossing the bridge toward the East River but says this remains a popular route and needs attention. “Because of the safety along East River, we are not promoting that route; but by working with the Greenway Commission, we hope to find state and federal funding for studies to make it a safer route by possibly making adjustments in phases,” she said.

“This is long overdue,” said Crawford, a lifelong Islander and former Town Board member. “There was a lot of momentum in that meeting, and by involving the Greenway Commission, the Town Board and the Long Range Planning Committee and Parks and Recreation, we are working together to create a comprehensive sign package for biking and trails that is going to be wonderful for everyone involved.”

Marston, who co-chairs the Parks and Recreation Department Master Plan Advisory Board with Board Member Tom Digati, is a strong proponent of wayfinding directional signage for the town’s trail system. Marston is actively working on the Nike Base trail, which he would like to see completed to the West River bike path and east to the Margery Gallogly Nature Sanctuary Trail. “Ideally, I would like to see us work with the DEC to construct a pedestrian foot bridge over Big 6 Creek to make the walk into Gallogly much safer,” he said.

The vision of Sharpe, Marston and others on the trails committee is to have bicycle racks at the Nike Base so bikers can lock their bikes there and walk through the Gallogly Trail. Restrooms with outdoor access were also constructed for bikers going along the West River.

Marston sees all this activity as a way to bring more activity to the Nike Base on Whitehaven Road and more interest in Grand Island as a family destination for biking and hiking.

Lockett said the group also discussed the other trail development opportunities on Grand Island, with the end goal of having a diverse mix of trails all connected into an overall trail network plan.