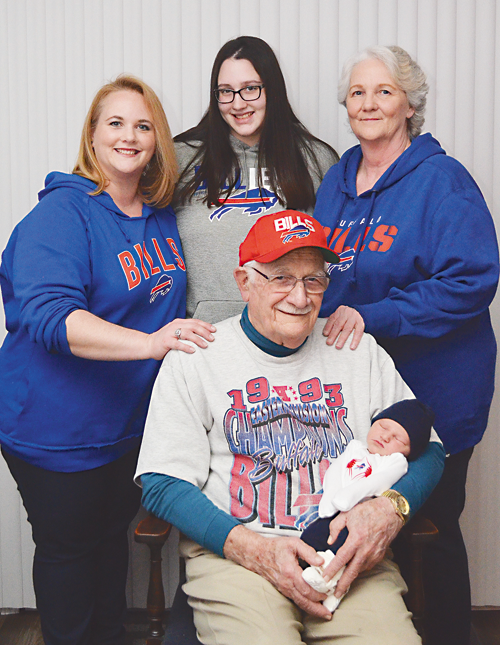 A five-generation photo of Bob Goulding's family shows an age range from 1 month to 90 years old. Everyone is wearing their Bills colors to cheer the team on during the season. Goulding is seated with his great-great-grandson, Wyatt Nicholas Lancaster. Standing, from left, family members are: Goulding's granddaughter, Kim Pressley; Kim's daughter, Kayla Pressley, who is Wyatt's mother; and Goulding's daughter, Kathy Shonitsky, who is Kim's mother. (Submitted photo)

Bob Goulding, 90, the patriarch of a five-generation Island family, is proud to welcome the family’s youngest member – his great-great-grandson Wyatt Nicholas Lancaster.

Goulding is also proud that the bookends of the family, the oldest and the youngest, are both males. In between are 15 guys and 14 girls, so Wyatt is the tiebreaker, tipping the scales in favor of the men.

“The boys outnumber the girls, finally,” Goulding quips. “We were dominated by women all our lives.”

The little guy, born Jan. 15, 2021, seems quite comfortable with his great-great grandfather.

Next in line on the family tree is Goulding’s daughter, Kathy Shonitsky, mother of four girls. Then there’s Kathy’s daughter, Kim Pressley, herself the mother of five girls, two of whom are still at home and in high school. In the next generation, there is Kim’s daughter, Kayla Pressley, 23, who is Wyatt’s mom.

It’s not that often that you have such a wide age span of family members living under the same roof. Goulding has an “in-law” apartment in the house on Fix Road that was once owned by his daughter and now shared with his granddaughter and her youngest two. Granddaughter Kayley and her family live in an apartment complex on Bedell Road.

“My life has changed over 90 years. I’ve gone through five generations, so everything has changed completely since I was brought up. It’s a challenge, there’s no question about it. But it’s a good challenge,” Goulding said.

“It’s interesting to find out exactly how they’re coping with everything as we coped with everything when we were first married.” As for Wyatt, Goulding says, “It’s a totally new experience, because it’s been a good many years since we’ve seen babies in the family.”

Other family members who have young kids live in Georgia and Texas. “Their children, we don’t see too often,” Goulding said, adding that he doesn’t travel anymore at his age. “You experience things at 90 years old that you never experience when you’re 70. I gave up motorcycle riding when I was 83. It’s kind of a very unusual experience to be limited after being active all your life. But it’s a great experience to see all the activity going on in here.”

Goulding says one the biggest changes he’s seen over the years is in education. “They don’t do handwriting anymore,” he said. “They’re totally relying today on computers. I’m still a pen-and-pencil guy.”

His career was in the men’s clothing business. His father-in-law, Edward Brennan, founded Brennan’s Men’s Wear in 1915 in the Black Rock section of Buffalo. Goulding worked with Brennan and eventually took over as storeowner, working there from 1952-92, until his son took over. The store closed in 2007 amid competition from the larger chain stores. It was located at 2069 Niagara St. at the corner of Hertel Avenue.

Granddaughter Kim Pressley feels fortunate to have her grandpa living there. “It is such a privilege to be able to be in the same home and get to spend so much time with him. Not many people my age get to have a grandparent around,” she said. “And for my children, they have the opportunity to really get to know their great-grandparent. I think we’re very blessed as a family to be able to have such close generations and be able to all get to know each other, she said.”

“He gives us a lot of insight to what life was like when we have our dinners together and the kids get to hear how life used to be back then,” she said.

Kim rattles off a long list of things her grandfather can do that many 90-year-olds can’t. “He still cooks up a storm, “ Kim says of her grandfather. “He just made me some cream of asparagus soup that was delicious – from scratch,” she said. “He’s got an exercise bike downstairs. We go to church every Sunday. He’s active still in the Lion’s Club of Grand Island. He was driving up until just a little while ago. (He gave it up around Jan. 1)

He has been a member of the Lions Club for 66 years, making him both the longest-tenured and the oldest member of the club. Granddaughter Kim is vice president of the Grand Island Lions Club, which has been meeting virtually recently.

His secret to longevity: “Two Manhattans every day,” Goulding said. “Every time I go to the doctor he says, ‘Are you still drinking the Manhattans?’ I say, ‘Yep, two every day,’ And he says, ‘Keep doing it!’

Great-granddaughter Kayla appreciates the special nature of her family. “I love it. It’s amazing to be able to see him meet his great-great-grandpa. I almost cried. It’s very surreal because it’s not something that I ever would have thought would happen.”