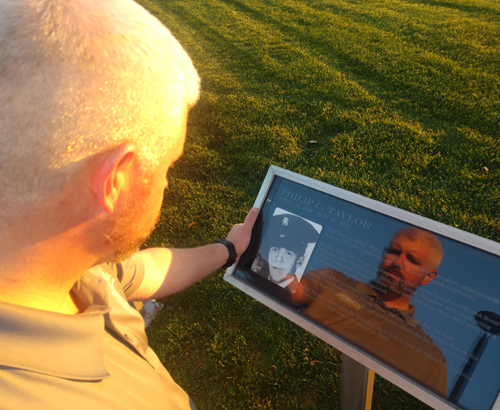 Chris Taylor reflects on the Killed In Action plaque of his uncle Philip, killed during the Vietnam War. (Photos by Mike Billoni)

Chris Taylor is a lifelong Grand Island resident who followed in the footsteps of family members who served their country in a branch of the armed forces when he joined the United States Air Force upon graduating from Grand Island High School in 1999. He left the Island with the memory of his uncle, Army Sgt. Philip C. Taylor, heavy on his heart. Sgt. Taylor was one of the first U.S. soldiers killed on Cambodian soil during an air strike at the tail end of the Vietnam War in 1971.

The young businessman, who co-owns Certified AutoBrokers on Grand Island Boulevard and is married with two young children at home, is one of many volunteer members of the DeGlopper Memorial Expansion Committee. He chaired the fundraising committee and, while he does not say it, you can see the determination in his eyes that the financial goals will be met for what he calls “an amazing community project that will not only properly acknowledge our veterans and those killed in action, but it will serve as an education for visitors about those who answered the call to serve our country.”

According to Committee Secretary Elsie Martino, when the final design of the DeGlopper Memorial at the intersection of Grand Island Boulevard and Baseline Road was approved, the price tag was $750,000. With just under four months to go before the June 5 unveiling, $171,550 in donations is needed to complete the entire wish list of this spectacular memorial in the center of town.

“We are clearly in the home stretch of a very long road, but we are happy to say we have raised enough money through donations for a spectacular unveiling of an amazing statue of Charles N. DeGlopper, our Killed in Action stanchions will be in place, the wall of veterans is in place and so much more will be ready for the public on June 5,” a proud Taylor said during an interview this week. “The remaining funds we will continue to raise are for projects that will enhance this entire memorial.”

Grand Island native Pfc. Charles N. DeGlopper was killed in action in World War II on June 9, 1944, in the Battle of Normandy. He was posthumously awarded the Congressional Medal of Honor for his bravery in saving the lives of fellow members of his Army platoon.

Taylor and Dan “Double D” Drexelius, the project manager, would not name individual donors for fear of missing someone, but as the project gets closer to completion, they will recognize everyone who has played a part in it.

“We have raised more than half a million dollars over the past several years and it has mostly come in the form of small donations from families and residents on the Island and throughout Western New York,” Taylor said. “Just the other day, I opened an envelope and there was a check for $1,000 from someone who said he has seen our progress and wanted to help.

“That has been what our fundraising has been comprised of. It is not big corporate sponsors coming in with big checks – but we certainly would take them if they were interested in donating,” he added with a smile. “It has been funded and supported, both financially and in-kind, by small businesses and residents. Personally, I would like to thank all the families who have supported us during our many fundraisers here on Memorial Day and the flower sales and other events where people donated $5, $10 or $50. It all adds up.”

Martino said the money raised has allowed the committee to acquire the land; pay for the life-sized sculpture of DeGlopper; sidewalks, drainage, paving the parking lot, lighting, the KIA stands for each hero, refurbishing the KIA Monument, the installation of sprinklers, the granite memorial walls for all veterans, the brick pavers for the Gold Star around the flag and landscaping.

With the additional funds raised, Taylor and Martino said the following big items can be obtained:

Four brass plaques around the black granite base of the DeGlopper statue … $20,000.

These plaques, designed by David Knox of Armento Plaques, will tell the DeGlopper story. The plaques, with a 54-inch bottom width, 48-inch top width and 24-inch height, will tell DeGlopper’s story and include the Congressional Medal of Honor citation; etchings of his prominent medals and badges and “For God and Country” printed in Latin.

“That is going to look so impressive,” Taylor said. “And it really is what the entire Memorial is all about - to educate the public on why this was built. Those plaques will tell the story of our World War II hero, Pfc. First-Class Charles N. DeGlopper.”

A 4-foot-by-6-foot granite monument with a bugle carved into the top of it with the lyrics of Taps on the monument … $15,000.

“I never knew there were lyrics to Taps but there are, and we will have them etched on both sides of this monument,” Drexelius said.

A 4-foot-by-6-foot granite memorial signifying the Purple Heart with Eagle’s Wings etched into it … $15,000.

“This will honor all those soldiers who were injured in battle fighting for our country,” said Drexelius, who has been working closely with the local Purple Heart organization in Western New York on this monument.

“The outpouring of people to help with this project has been phenomenal,” Drexelius said. “I have never been turned down for any request I have made for this project.”

As Taylor reflected on all the hours committee members have spent on this project, he quietly said, “We can never forget the sacrifices of those who fought for this great country and those who made the ultimate sacrifice and left their families behind right here on Grand Island. This will be a great way to show that we will never forget.”

This week’s featured Killed in Action soldier is William Gillen, who served in World War II and lost his life on July 28, 1943. According to committee member Mary Cooke, who did the research, Gillen was Grand Island’s first casualty in World War II, leaving behind his wife, Elizabeth Curren Gillen, who gave birth to William Stewart Gillen, Jr. a month later on Aug. 31. A photo of mom and the newborn appeared in the Buffalo Courier-Express on Sept. 13, 1943.