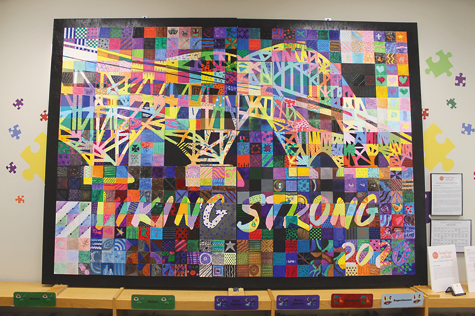 A small Grand Island art studio that’s less than a year old has wasted no time bringing the community together in a big way.

Born in the midst of COVID-19, Orange Poppy Art Studio, 1990 Whitehaven Road, decided on a project that could lift people’s spirits by letting them create a large piece of community art.

The community project was the first thing they did as an art studio, said proprietors Bonnie Nevans and Crystal  Still, both of Grand Island.

The result, the Viking Strong mural, hangs in the newly reopened Grand Island Memorial Library, welcoming young and old to share a space and unite, despite a pandemic whose effect was keeping people apart.

Seventy individuals and families volunteered to be art guinea pigs, decorating a square at the artists’ request, but having  little clue as to what the end product would be.

“In the height of the lockdown – March or April – you saw those positive stories, how people came together in ways that they could,” Nevans said. “And so we said, maybe our first kind of kickoff as a business could be a communitywide thing, where we could get as many people who wanted to, to be involved,” she said. “It would be something for artists and non-artists alike. Just people who wanted something to do.”

They put the word out on Facebook “and we got a great response,” Nevans said. “Originally, it was supposed to be 60 artists, but we had so many respond that we added a row on so we could up it to 70. That’s why the 2020 is there.

“We weren’t sure how it was going to go – where people were going to go, ‘Who the heck are you?’ ”

“So basically, if they said they were interested we put packets together and we had them available on my front porch  and people would come and they would pick up the packet with their name on it,” Nevans said. 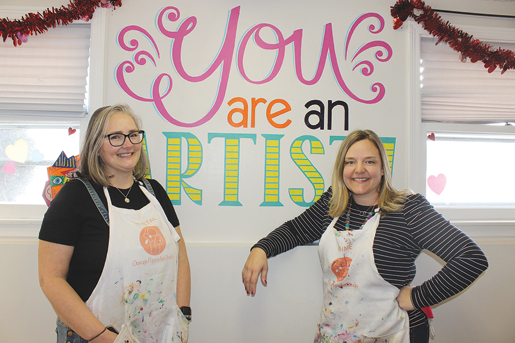 Crystal Still (left), and Bonnie Nevins are co-owners of Orange Poppy Art Studio, 1990 Whitehaven Road. They opened their current studio in September to give students, from toddlers to adults, a way to interact, be creative and just have some joy. (Photos by Karen Carr Keefe)

The project was designed so participants could use whatever supplies they had on hand  “We have everything from colored pencils  and chalk and oil pastels to acrylic paint and watercolor paint,” Nevans said.

“Once they were done …  they returned it to my porch. Everything was done no contact and then when we got all 70, Crystal and I took a trip to Home Depot.” They bought two boards and mounted the squares onto the boards.

In their project description online, Nevans and Still said, “We started with a photograph of the bridges taken by Grand Island resident and photographer Michael Scott. We took the photo and reduced it down to only two values – light and dark. Next, the image was divided into small squares. Each square was enlarged to 4 x 4 inches and was assigned a number correlating with where it appeared in the picture as a whole. Each artist was given one of the squares randomly. They did not know what the full picture would turn out to be, as each square really just looked like an abstract image of lines and shapes.”

Grand Island Memorial Library Director Bridget Heintz partnered with the artists to provide display space for the resulting Viking Strong community Wide Art Project. “Luckily, we were able to reopen [the library, which was closed due to state COVID-19 rules] and a lot of the artists and their families have been coming in to see it,” Heintz said. “It’s an added feature of the library – and it just coordinates wonderfully. It’s the first thing you see when you walk in the building. It’s a welcome addition.”

Nevans said they were  eager to work with the library. “I think the project, on the whole, speaks to the community of Grand Island and people’s willingness to be involved and work together. … I think the whole thing is just a neat representation of Grand Island, as a whole. That’s why we included the Viking Strong, Nevans said. “Despite all this craziness, people were still helping each other and willing to come together,” Nevans said. They said the library was a perfect match for the display of the “Viking Strong” art project.”