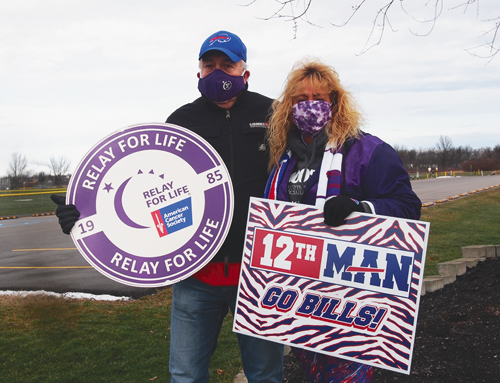 The 2021 version of Relay For Life, tentatively scheduled for June 4, is expected to look far different from previous versions of the event, as a result of the COVID-19 pandemic. “We are hoping for an in-person event, but it is doubtful that can happen because of New York State protocols, American Cancer Society protocols, and people’s comfort levels,” said Lynn Marston Dingey, one of three co-chairs of Relay For Life.

American Cancer Society protocols for an in-person event are very strict, Dingey explained. The protocols require everyone participating to check into the event. Everyone has to walk in the same direction on the track. A schedule for cleaning is mandatory. Hand sanitizer stations are required. Everyone must wear masks. Bounce houses and slides are “not encouraged,” Dingey said.

“The main focus is to keep survivors safe,” said Dingey.

The Relay For Life committee has been discussing the possibility of doing either a hybrid event or a completely virtual event. Last year, because of the nationwide lockdown, the in-person event was canceled, but virtual activities were held. One idea would be to have “people walk laps at home or get together as a team to walk laps,” Dingey said.

“Last year, people picked up luminarias from four to five houses. Pickup was on porches and was contact free. In addition, popup sales were held for luminaria. A lot was done through Facebook. We also delivered to people on the Island, who wanted the luminarias,” Dingey explained. This year, because of the potential for holding a hybrid event, more options could be available.

It is very likely that ceremonies will be held virtually. Those ceremonies would include an opening ceremony featuring survivors, a luminaria ceremony, and a closing ceremony.

At this point, plans for Relay For Life, as well as the kickoff event, as of yet unscheduled, are in the idea stage. “We’re tossing out ideas and discussing them,” Dingey said. One thing that’s being discussed is the entertainment for Relay For Life, which could be done virtually. The entertainment being discussed includes dancing, musical groups, and, possibly, the fire performance, Dingey explained

A small luminaria ceremony would include poetry reading and bagpipes, which Dingey described as “huge in our event.” She said that she would like for people to send in pictures of the luminaria at their homes, which would require them to place and light the luminaria in advance of the actual event. In addition to the photographs of the luminaria, “we could have a scrolling roll call of survivors’ names, as well as a roll call in memory of those we lost.” Another idea would be to share photographs of survivors.

“It’s all in the comfort level for people. Some don’t want to share a picture, but they are OK with sharing a name,” Dingey said.

Dingey, who shares the position of chairing the Grand Island Relay For Life event with Kim Kalman and Wendy Napier, added, “The smiles on the survivors’ faces brings me back, year after year.”

“This year, we would like to recognize the survivors with a meal,” Dingey said. “We would like a pick up/drive-thru survivors’ dinner. The meal is usually done by Neil Gallagher, with his company, TSP. He does a great job customizing the meal for the survivors.”

It is expected that the honorary survivor for 2021 will be introduced at a kickoff event, possibly held at the beginning of March. This kickoff event is expected to be a virtual event. “We are trying to contact other Relays to see what has been done elsewhere.”

“Even though COVID-19 has changed things and has affected everything that’s done in the world, it has not stopped cancer. We need to make sure that hope is not canceled for the survivors and their families,” Dingey said.

If you have ideas for Relay For Life 2021, contact Lynn Marston Dingey via Facebook or at [email protected]. Another option is to check out the Relay For Life website (www.relayforlife.org/grandislandny.)