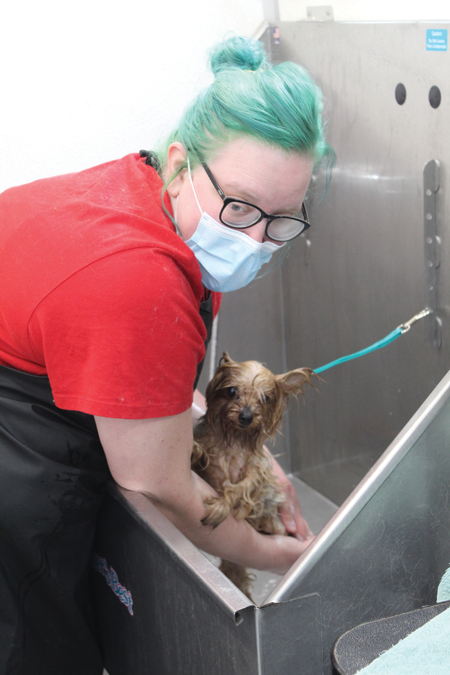 The hair, the nails, the bow … the long and the short of it

It’s winter, it’s cold and we are still in the midst of a pandemic. But the dog needs a bath, and nobody in the family wants to wrestle with a dog, suds and the bathtub.

There’s a solution, and you won’t even have to get wet!

Sarah Heibel has a brand-new business, up and running since November, but she isn’t a newcomer to the field of pet grooming.

“I have been in the industry and grooming at a corporate groomer for 10 years,” she explains. “In that corporation, I started as a groomer, worked up to manager, and then was actually an academy trainer, so I trained probably close to 150 students from here to Syracuse in the three years I was in that position.”

A sole proprietor of the business, she lives in Tonawanda but gets quite a few customers from Grand Island. Her decorated van is her calling card – it’s hard to miss and gains attention as she arrives in a neighborhood. “Every time I park somewhere, I get a couple of calls from Grand Island.”

In mid-January, Heibel came to the Falconwood neighborhood to give a bit of swag — and cleanliness — to a sharpei mix and a Yorkie.

One of them belongs to this writer. He’s a sharpei named Leonard.

The 8-year-old gold and silver Yorkie, named Honey, belongs to Erin Deering of Grand Island, who found Wag with Swag by Googling, then through a referral from another mobile groomer. “I was looking for a place that would be open right now in the pandemic. My dog really needed a good bath and a haircut,” Deering said.

The dog and owner were a little nervous at the beginning, but once Heibel got started, Honey was not scared at all, and neither was her owner.

“I was a little apprehensive at first, because it is a new experience for me, but when I saw the results, I would go back to her anytime I needed my dog done,” Deering said. “She actually took the time to understand what I wanted for my specific dog,” she said. “She was really cute when she was done.”

“They were super well-behaved,” Heibel said. “You know, honestly, most dogs are really well-behaved when they’re in the van. It’s a different environment for them.” Heibel said. “It’s just me and them, one-on-one, and we get to kind of hang out and get to know each other more than I used to in my past career” as a groomer at a chain store. “So it’s nice for me. I get lots of kisses, lots of love, lots of … hair!”

Heibel has had a lot of extra business since the pandemic. “That’s part of the reason why I chose to go mobile because I can do it contactless. I can come to your house and you don’t have to leave your house,” she said.

At the beginning of the pandemic, when more people were quarantining, Heibel was still working at a big-box pet groomer. There was “a huge decline in the number of people bringing their pets in. because they were afraid and nervous to do that,” she said. Now, people seek out the mobile pet groomers because of the pandemic, she added.

Gorman Enterprises in Elma outfitted the interior of the van. “They normally do ambulances, fire trucks and food trucks, Heibel said. She purchased the van from Orleans Ford in Medina.

Streamline Design of North Tonawanda did Heibel’s logo, her branding and decorated her van.

“When I saw the van, I cried. I got down on my hands and knees and cried because of how perfect it was.” 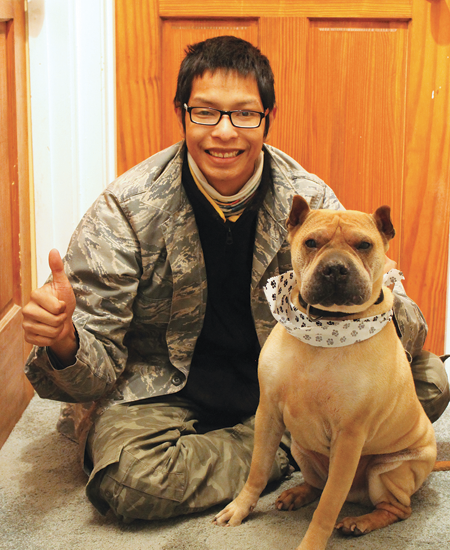 Nathan Keefe with his pet Sharpei, Leonard, is pleased with the results of the dog’s grooming by Sarah Heibel, owner of Wag and Swag mobile pet grooming. Leonard does not look pleased.

Other pet groomers in the area, one of them mobile, include: