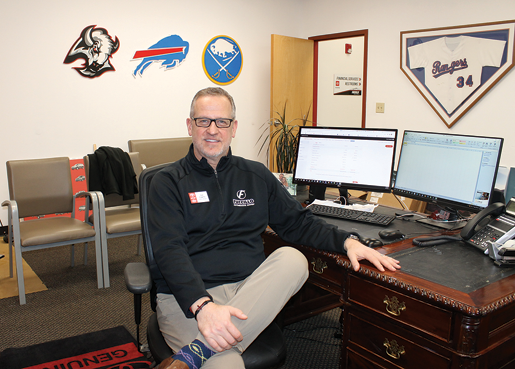 Finding new ways to give back to GI community

Tom Fogarty, the new general manager at Fuccillo Auto Group on Grand Island, is no stranger to the car business. A 38-year veteran of the industry, he has been a general manager with Toyota in Buffalo for 19 of the past 20 years. He now oversees all three of the Fuccillo dealerships on the Island – Toyota, Chevrolet and Hyundai.

He’s also a Grand Island resident who is eager to continue to learn more about and serve the community he moved to about two-year-and-a-half years ago.

“I don’t know how much vested you could be. I live here; I’ve been with Toyota forever. I am the longest-tenured Toyota person in the retail side of things in Buffalo. Period,” Fogarty said.

“I met my wife on the Island. A friend of ours knew her and me and decided to introduce us to each other,” he said. His wife, Jody, is a first-grade teacher in the Ken-Ton School District.

Fogarty had been working for Chris Taylor and Travis Smith at Certified AutoBrokers on Grand Island for about nine months when a job opportunity popped up at Fuccillo and he decided to go back to Toyota “and get into the new car game again.”

“The scenario came where my wife and I sat down and – we’d only been married for about a year-and-a-half – and I said, ‘I’m thinking about taking this job over there and I think that I’m the right guy.’ You know I’ve been in the business long enough. I’ve been with Toyota all those years and I’ve probably been involved in somewhere over 40,000 to 50,000 Toyota sales over the years and so, it got to a point where I want to get these dealerships back to where they really needed to be – or where they could be.”

“Things are getting better here, too. We’re seeing more Grand Island residents come in. If they live here, it brings a natural attention to them from us, especially people that have bought the car here, serviced their car here and are looking to buy their next car here. I want all of those people to be our customers,” Fogarty said.

“And I want the people that haven’t come back here for several years to realize that it is different now, and I’d like them to come in and see for themselves,” he said.

“I tell everybody here to handle anybody and everybody that walks in to look at a car like family – truly like family,” he said. “I’ve always been behind what I’ve said. And I treat people right and we are treating people right. We’re respecting their time, we’re respecting the energy they have to put out to buy a car,” he said. He adds that the service department is the pillar of the store.

“My main goal is to provide this island with three very, very good, solid, honest dealerships that people can come to. I don’t want them to have to leave the Island to buy a Hyundai or a Chevrolet or a Toyota. They shouldn’t have to.”

Selling cars these days involves not only getting people on the lot or into the showroom, but also onto the website and the Facebook page.

Fogarty enjoys having a Fuccillo Toyota Facebook page that is lively, full of local videos and shows not only the current car deals, but also community spirit for Grand Island and Western New York. “It’s not just a Toyota Fuccillo Facebook. I put all different stuff up … I put Bills stuff up, I put racing car stuff up. I want it to be entertaining for everyone. But it also gives us an outlet where if someone has any type of an issue they can reach out through that or they are more than welcome to contact me directly. The dealership phone number is 716-773-7505.

He has fun being a pitch-man for the Fuccillo dealerships in his Facebook videos, talking about cars and offers – and getting in excess of 23,000 views for several of the Facebook posts.

Fogarty said he knew Billy senior and junior from years with Toyota and some golf outings. There also are Fuccillo dealerships in Central New York and Florida.

Along with taking the helm at the company that Fuccillo Sr. branded famously as “HUGE,” Fogarty has taken up the dealerships’ mantle of supporting the community through corporate charitable donations.

“There’s probably more that don’t reach out because they’re too proud,” said his wife, Ann Dahl, also a board member. They said the need exists year-round, which makes donations like that from Fuccillo dealerships all the more welcomed. The Dahls have been involved in Neighbors Foundation for more than 25 years each.

Fogarty said he was reading about the Neighbors Foundation online and he told his wife, “I’d really like to get involved more.”

Explaining Fuccillo’s participation in charitable giving, Fogarty said, “We’re not jumping in for anything other than we really want to help.”

In June of 2020, the dealerships ran the campaign, Fuccillo Feeds the Front Lines, helping feed the essential frontline workers who in turn were helping Western New Yorkers in the battle against COVID-19. “We went out and did six or seven drop-offs at hospitals, at the police department, the fire department, and we dropped off 1,700 lunches,” Fogarty said. The biggest delivery at one facility was about 400 lunches they dropped off at Mount St. Mary’s Hospital in Lewiston. Fogarty and Fuccillo Chevrolet General Manager Ronnie Mansour took the trip together with vehicles filled up with the lunches. Fuccillo employees and Mount St. Mary’s staffers all helped in the effort. “It was great. It was just a matter of trying to say thank you to the nurses and doctors and police and fire that were all out there,” Fogarty said. “Ronnie kind of orchestrated that whole thing. I’d only been here about five or six months and he grabbed the reins and got it going,” he said.

“We did it together,” Mansour said, “We picked up food from the Island,” to support Island businesses. “We went to the new Viking Diner; we went to Adrian’s; we went to 773 North.”

In October, Fuccillo of Grand Island made a $10,000 donation to Making Strides Against Breast Cancer.

You might say his car sales and management experience embodies the Toyota slogan, “Let’s Go Places,” because his career advancement started with a 17-year stint at Northtown Toyota in Amherst.

He moved to West Herr Toyota in Orchard Park, which was the first Toyota store for West Herr Automotive Group, purchased from John Maroone Toyota.

“When I first got there, they had just gotten rid of the Airstream trailers … It was a little different,” he said.

“We opened that store and grew that store very large, and then opened up a second Toyota store in Williamsville, and I was there for 15 years.”

He went back to Northtown for two years and when he left there was general sales manager at age 38.” I went back for a couple of years,” he said. “I still love those guys – they’re great.”

When it comes to cars in general, and Toyotas in particular, Fogarty is very well-versed.

And when it comes to his new hometown, he says, “I want to help the Island,” he said. “I live here. This isn’t about really selling cars. This is about being a good neighbor, being a good person and helping. In the automotive industry, we’re fortunate to be able to do that.”