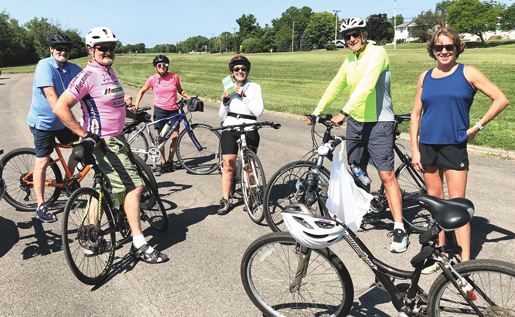 On a recent late January afternoon when skiing, snowboarding or sledding were the optimum outdoor activities, Gregory D. Stevens, Michelle Lockett and Jim Sharpe were talking about bicycling and hiking on Grand Island and the urgency to bring together New York state, Erie County and Grand Island officials to create a plan to improve bike lanes, connect trails and position the Island as a true ecotourism destination.

“Having a plan that rolls out five years of improvements to roads, waterways and trails on Grand Island is critical and now is the time to do that,” explained Stevens, the executive director of the Niagara River Greenway Commission. A Buffalo native, he earned a bachelor’s degree in biochemistry at Harvard University and spent many years working overseas. He returned to Western New York in 2005, dedicating much of his volunteer time to building organizational capacity to restore water quality and promoting public enthusiasm for local waterfronts.

The former chairman of the Niagara River Greenway board of directors has overseen the creation of the Greenway Shoreline Trail 37 miles from Lackawanna to Fort Niagara in Youngstown. Grand Island is the star attraction of the trail for bicyclists, runners and walkers, but it currently poses the greatest challenges for Stevens and Greenway’s community engagement manager.

As Stevens and Lockett work toward completing this scenic and engaging trail through two counties, Grand Island gives them the opportunity to offer three separate trails from bridge to bridge, but each has its own set of problems. That is where Sharpe, chairman of Grand Island’s 18-member Long Range Planning Committee comes in. The committee has been working for years on creating and promoting trails throughout the Island, enhancing the waterfront and working toward improving bike paths.

“Niagara River Greenway would like to get cyclists through Grand Island in a safe way on their route to Lewiston and Youngstown,” Sharpe said. “Today, they cannot identify a route that allows them to do that.”

“We have two gaping holes in our plan,” Stevens said. “We are going to kill people if we send them down Grand Island Boulevard and we have already seen cyclists and walkers get mangled on East River Road.”

The other option is East River Road, which Stevens calls “a real opportunity” after taking a recent bike ride down the road on a clear, but chilly, January afternoon. “From the South Bridge to Whitehaven Road the pavement is deteriorating to the point that Erie County has it on its lists of repairs. From Whitehaven to the North Bridge is not a complete disaster because there are some shoulders, but it does need some attention,” he explained.

“If we could get the road work from the South Bridge to Whitehaven repaired, we could live with the rest of it for a while but we need everyone to agree on a plan to improve East River Road for bicyclists,” Stevens added.

Stevens and Lockett have met virtually with Grand Island Supervisor John C. Whitney and Town Board member Jennifer Baney, and a second meeting is scheduled that will include board member Pete Marston. Town officials are excited about working with the Niagara River Greenway and are receptive to meeting with state and county officials.

“We are always willing to sit down and talk about issues that will improve Grand Island,” Whitney said during an interview in his office this week. “We look forward to working with Greenway on improving our trail system throughout the island and on the road issue for the cyclists.”

Whitney said a meeting will need to take place with the New York State Department of Transportation to rectify the issues on Grand Island Boulevard from Baseline Road to the North Bridge. He said the issues regarding East River Road could take much longer because “it poses some real challenges because of its terrain, the topography and houses on the river side of the road.”

Sharpe, who lives on East River Road and has heard about its condition from neighbors and fellow cyclists for years, added, “East River needs to be addressed and there is an urgency because it is on the Erie County list of roads to be repaired and repaved and we need to be in on those discussions well before the work begins.”

From early spring to late fall, Sharpe has seen hundreds of bicyclists come to the Island for the nearly 30-mile round trip, mostly along the river. They love the new 8-mile bike and walking path New York state opened along the West River but they fear for their lives while riding along East River Road. Sharpe calls the 8 miles from the South Bridge to Buckhorn State Park “an extremely important 8 miles we must address.”

He said there had been previous discussions with the town and Erie County but to this point there is no plan to adequately address this issue.

“We need to stir some cooperation to get things going for planning and marketing some of our projects, like our trail system and especially the 8-mile stretch on East River,” Sharpe said, with Stevens and Lockett in full agreement.

“Getting all of the stakeholders in a meeting to discuss these issues is the best way to start so we all have a clear idea of what is needed to accomplish these goals,” Marston said.

Sharpe, the town’s former deputy supervisor, who was reappointed chair of the Long Range Planning Committee by Whitney last month, said funding needs to be obtained for a study to create a proper bicycle path on East River Road. Whitney concurs, saying, “In light of the pandemic, everyone is hurting financially so this may take some time to achieve but we must start with a thorough analysis of the situation to achieve a viable solution.”

“The door needs to be opened with Erie County,” Sharpe added. “We need their engineering department to become involved and possibly work with the New York State Department of Transportation to help us identify TAP grants to fund the eventual work.”

“Grand Island and Erie County must make this a priority,” Stevens added. “The Niagara River Greenway absolutely wants to support a plan for the development of an improved East River Road.”

The third option for the bridge-to-bridge route of the West River Parkway, past Beaver Island State Park, can work but it is a much longer distance.

Whitney and Marston both agree on an interim, direct route from bridge to bridge that would satisfy the Niagara River Greenway. From the South Bridge, cyclists would head north on Grand Island Boulevard to the DeGlopper Memorial at Baseline. Rather than continuing on Grand Island Boulevard, they would ride north on Baseline Road and take a left on Bedell Road and turn right onto the Linear Bike Path, a Class 1 path that the town and state worked on together 15 years ago to extend it from Havenwood through Buckhorn State Park to the East/West Park Road to the North Bridge.

“All we would need are some lanes painted on Baseline, signage and approval from Erie County to make that happen,” Marston explained.

“It would be ideal for us to have a direct bridge-to-bridge route and a complete cycle path around the entire island to market to cyclists,” Lockett added.

Stevens, Lockett and Sharpe also talked about how all this work could position Grand Island nicely with a new industry – ecotourism. Ecotourism focuses on socially responsible travel, personal growth, and environmental sustainability. An integral part of ecotourism is the promotion of recycling, energy efficiency, water conservation and the creation of economic opportunities for local communities. Since the 1980s, ecotourism has been considered a critical endeavor by environmentalists, so that future generations may experience destinations relatively untouched by human intervention. Ecotourism typically involves travel to destinations where flora, fauna, and cultural heritage are the primary attractions and is intended to offer tourists an insight into the impact of human beings on the environment and to foster a greater appreciation of our natural habitats.

“As part of my job with Greenway I have taken many people on walks or bike rides through the trails on Grand Island or along the shorelines and they are overwhelmed by its beauty and everything that is here,” Lockett said.

“I am enthusiastic about our future,” Sharpe added. “The environment is right now because there are enough people that still believe and understand the importance of ecotourism and bicycling on Grand Island.”

Marston, a member of the Parks and Recreation’s Bike Path and Trail Committee, is excited to be working with Greenway on completing the trail system. He is anxious to talk with them about a bike trail from the West River to the Nike Base so riders could utilize rest rooms or explore the trail system at that end of the island.

“We have a lot of potential on Grand Island with our trail system that would not impede anyone’s lifestyle,” Marston said.

Whitney is equally excited about the connectivity of the town’s trail system, working with Greenway on a wayfinding signage system and encouraging the Town’s Economic Development Committee to continue its discussions about Ecotourism opportunities for Grand Island.

“We have all the features,” Whitney said with pride. “We just need to mold them together and sell the package.”