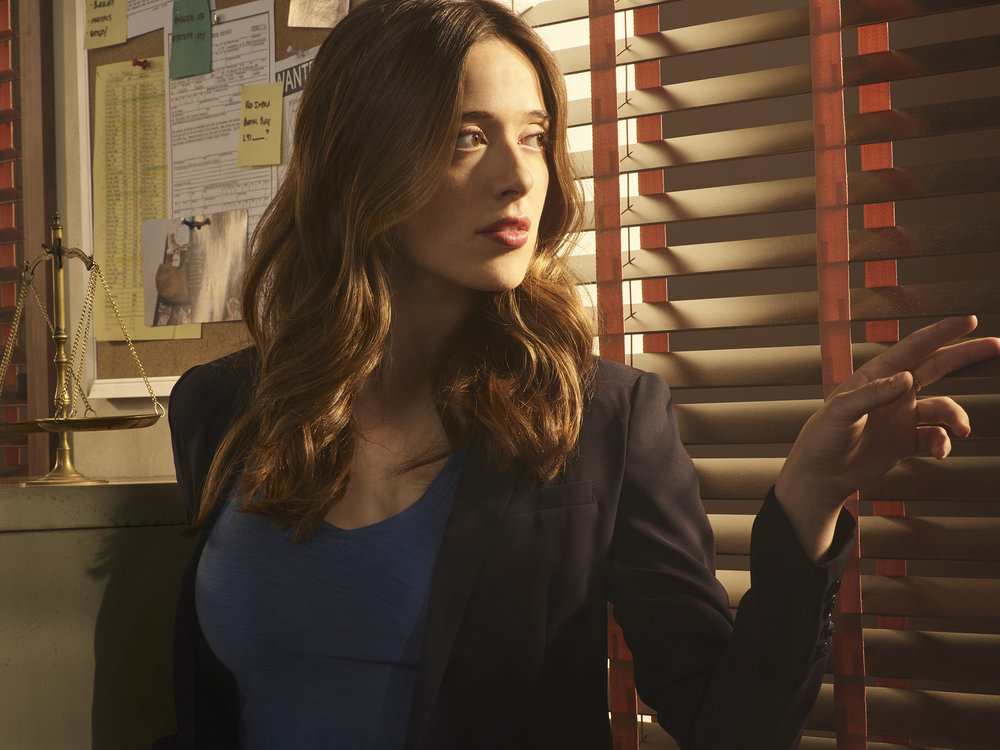 To the surprise (and delight) of “Chicago P.D.” fans last season, it seemed a “Burzek” baby was on the way. The shipper combo of on again, off again “Chicago P.D.” officers Kim Burgess (Marina Squerciati) and Adam Ruzek (Patrick John Flueger) was unexpectedly expecting. … But joy turned to sorrow when Burgess had a miscarriage upon jumping in between a victim and her perpetrator.

Two episodes ago, Burgess, still recovering, swore off another pregnancy and seemed all but convinced motherhood was not in her future. But after “Burzek” stumbled upon a wandering kindergarten-age child, Makayla Ward (Ramona Edith Williams), sorrow would turn back to joy.

Burgess befriended Makayla, whose mother was murdered, and the two formed a bond. In a “Grinch”-like moment, Burgess’ heart grew two sizes larger as she saw Makayla off to a new home.

In this week’s story, Burgess is quick to tell Ruzek she wants a family – and that’s why they can’t be together (what with his past penchant for being reckless, and all). The two once again bump into Makayla, whose aunt has shirked her caretaking duties.

Not wanting to see Makayla thrust into a foster home, Burgess agrees to take custody.

She tells Makayla they can be a family and … just like that, the “Chicago” writers righted the injustice that befell Burgess, and she becomes a mom after all.

What will this mean for “Burzek”? Can the once-engaged Kim and Adam make this work?

Squerciati spilled the beans in a recent interview with BTS. An edited Q&A follows. 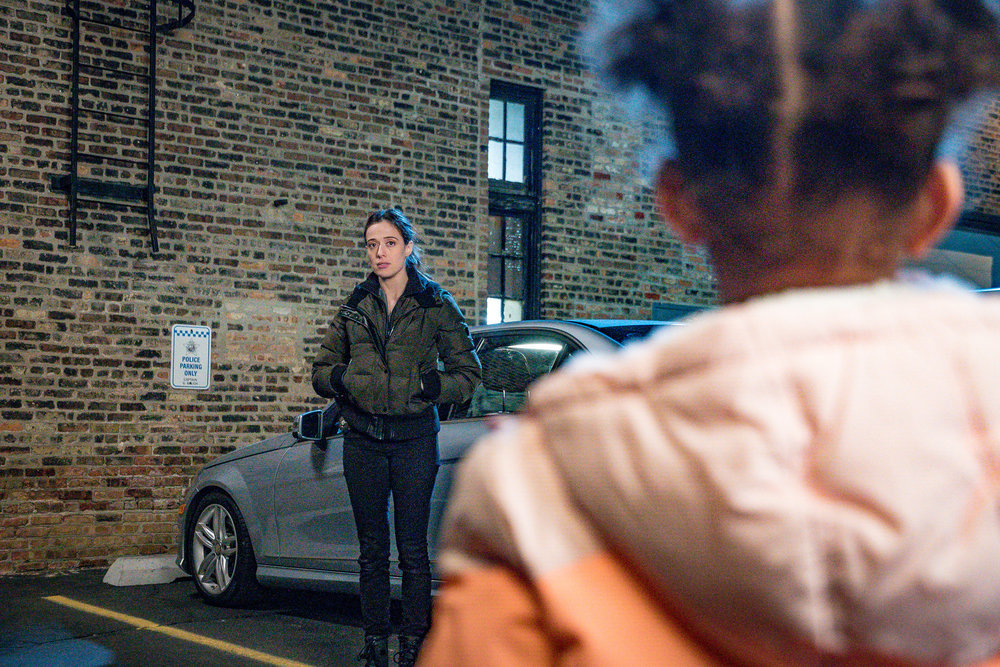 Marina Squerciati: I’m very lucky. In the beginning, it was very scary to start working without a mask, but the protocols that NBC has in place are truly incredible. So, it is great to be able to run around without a mask and feel like you're not endangering people.

Yes, I don't exercise anymore (laughs). Obviously, I’m not going to a gym. So it's great – it's great for a lot of reasons.

Since “Chicago P.D.” made its debut in 2014, Burgess has had the most character development – as a kind beat cop longing to join the intelligence unit; a support to partners Sean Roman and Kevin Atwater; a butt-kicking, no-holds-barred member of Hank Voight’s team; in and out of relationships with Ruzek; jaded by tragedy in her personal life; still capable of love – and of mothering a child.

Q: You know, looking at this episode and sort of seeing how it all comes together, and thinking back on the journey, to me it seems like Burgess has had maybe the greatest amount of growth – and maybe the most significant journey of any of the cast members on this show. How much do you think about that, how much do you look back and see where she started from, versus where she is? How much of your focus is just on moving forward?

Marina Squerciati: I think you just move forward. I mean, I used to keep all the scripts, and then it just got insane. It's kind of like … it's almost like diaries from your childhood; like, it's nice to look at them every once in a while, but it's mostly just moving forward.

She's changed so much that I almost feel like it's just a completely different person than season one.

Q: This is a very successful show; part of a very successful franchise; it comes from Dick Wolf. If it is true – what I said about your character having the greatest growth, the greatest journey of all the amazing talent that has been and will be on this show – what does that say to you about the creative team's confidence in you and in what you bring to the table as an actor?

To me, that says the writers really have faith in all of us, that they let us really be the No. 1 have an episode. And that's not true in a lot of shows, right. Normally, if you're a minor character, you'll be a minor character; but we all get to sort of shine.

It's true that I have had a lot happened to me, and I'm always excited. I just found out something else is happening, like I really pissed us off Ruzek; he gets really upset with me. I'm like, ‘Ooh, how exciting!’ I still get excited, which means that I still have more to do here.

Q: So, this mom arc, obviously we know Burgess, unfortunately, she lost a baby; and now she's revisiting this idea again of being a mother. We don't know how long that will last – if it's going to be temporary or permanent. What do you think about this particular story arc, and what are the challenges of bringing forth this sort of always evolving side of Burgess?

Marina Squerciati: I think it's great. I am a mom, and I am a working mom; and there are challenges to it that I'm excited that I get to like start chewing on and bringing to this show, because it's an aspect we haven't really tackled yet. So, it's cool from like the minor stuff to not looking as nice and having Burgess’ his hair look as nice or put together for the couple episodes after Makayla comes, to really knowing and understanding that she has a job where she puts her body in harm. And there's someone waiting for her to come home. So, all those things apply, and all those things, I think, well get worked on as episodes and the seasons to come.

Q: Talking to Patrick last week, there are so many different ways that you could look at the “Burzek” relationship. And one of the things that I talked about with him was the idea of settling. On the one hand, you could say that these two characters are just settling being together – if they're going to be together. But on the other hand, you could say that they refuse to settle, because they've gone out and they've had other relationships and they've come back to each other. Do look at it as one side or the other side, or how do you look at the settle versus not settling argument?

Marina Squerciati: That’s funny; I’ve ever heard or thought about it in settle versus non-settle. I always thought of it as sort of like two people who were meant to be together, and just can't get their shhh together. You know, like just can't overcome all the obstacles and the crap. I think that happens in relationships – it gets too much in people's way. I think they're meant to be together, and I just hoping that they get there.

I don't see it as a settle versus non-settle, but that’s so interesting. 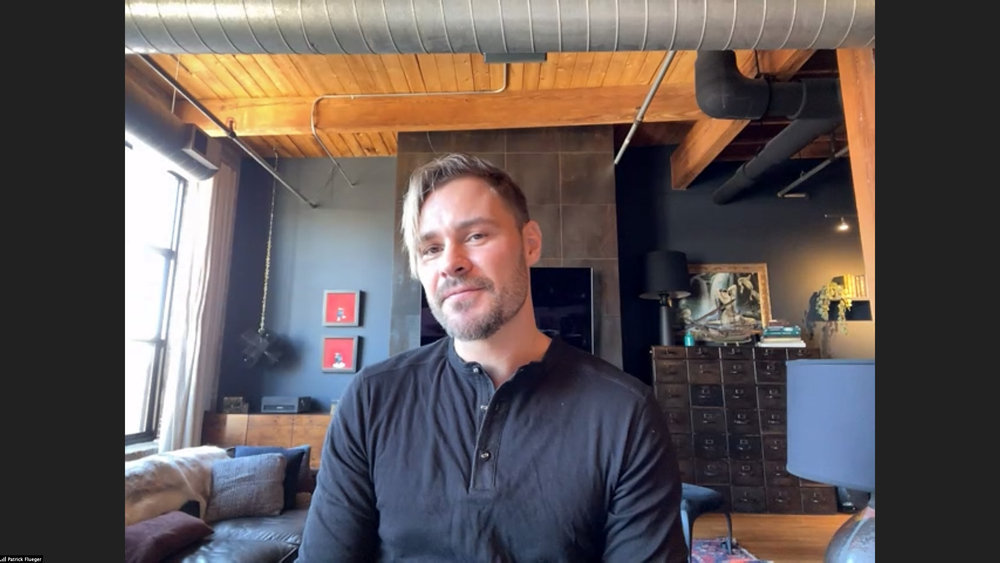 Flueger answered this question by saying, “I think that ‘Burzek’ – I think that these are two people that just can't get away from each other. You know what I mean? I think they try. They've dated other people. I mean, I’ve dated somebody else within the unit, which was a weird storyline, but it was there. …

Q: You mentioned earlier that this show does a great job where one character is the lead one week, and another character is the lead the next week. That's certainly not the case on a lot of shows. What do you think is the key? What do the writers and the producers do well on this show that enables all of you to be such a vital part of the stories?

Marina Squerciati: Rick (Eid), our showrunner, always has the sort of the case of the week reflect, sort of – in some way, not directly like a mirror – but in some way, hook into this personal story going along at the same time. And I think that's what makes this show so difficult to write, and props to all the writers, because it's such a dance. How do you find the hook for that character, and they do it every week – and we all have so much fun doing it and finding it.

I don't know; I think that's part of the reason that it's successful. That's a really hard thing to do, and they continually do it.

Q: It must also be cool to be part of such a large (“Chicago”) universe like that, right?

Marina Squerciati: Yeah, I mean, I feel – you know, I don't want to be cheesy or anything – but I really do feel blessed. I have a lot of friends who are out-of-work actors and there's not a lot happening right now. And I love the people I work with, and I love my character. 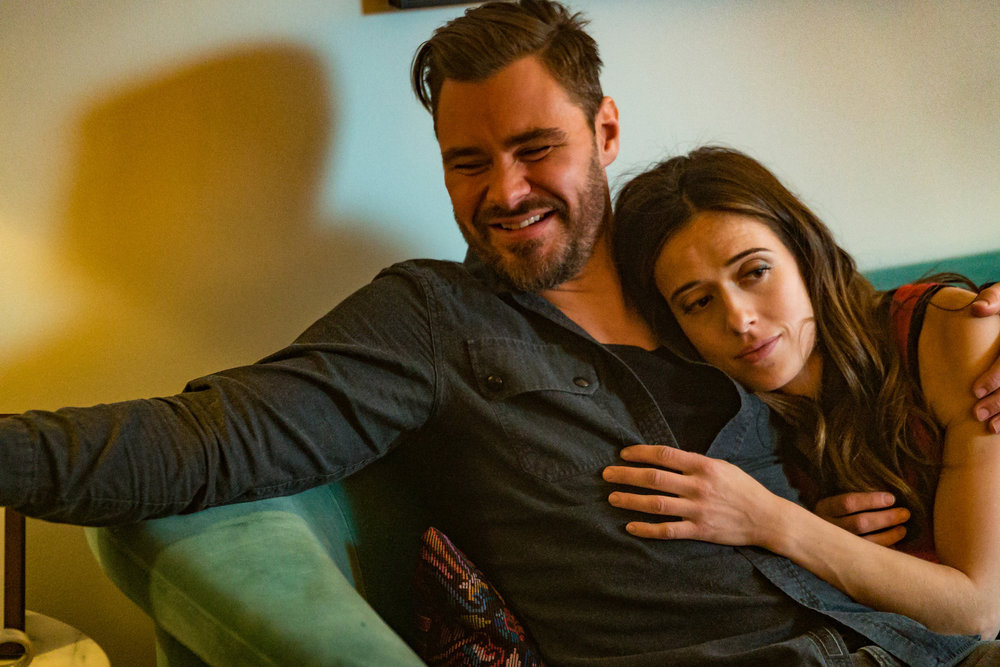