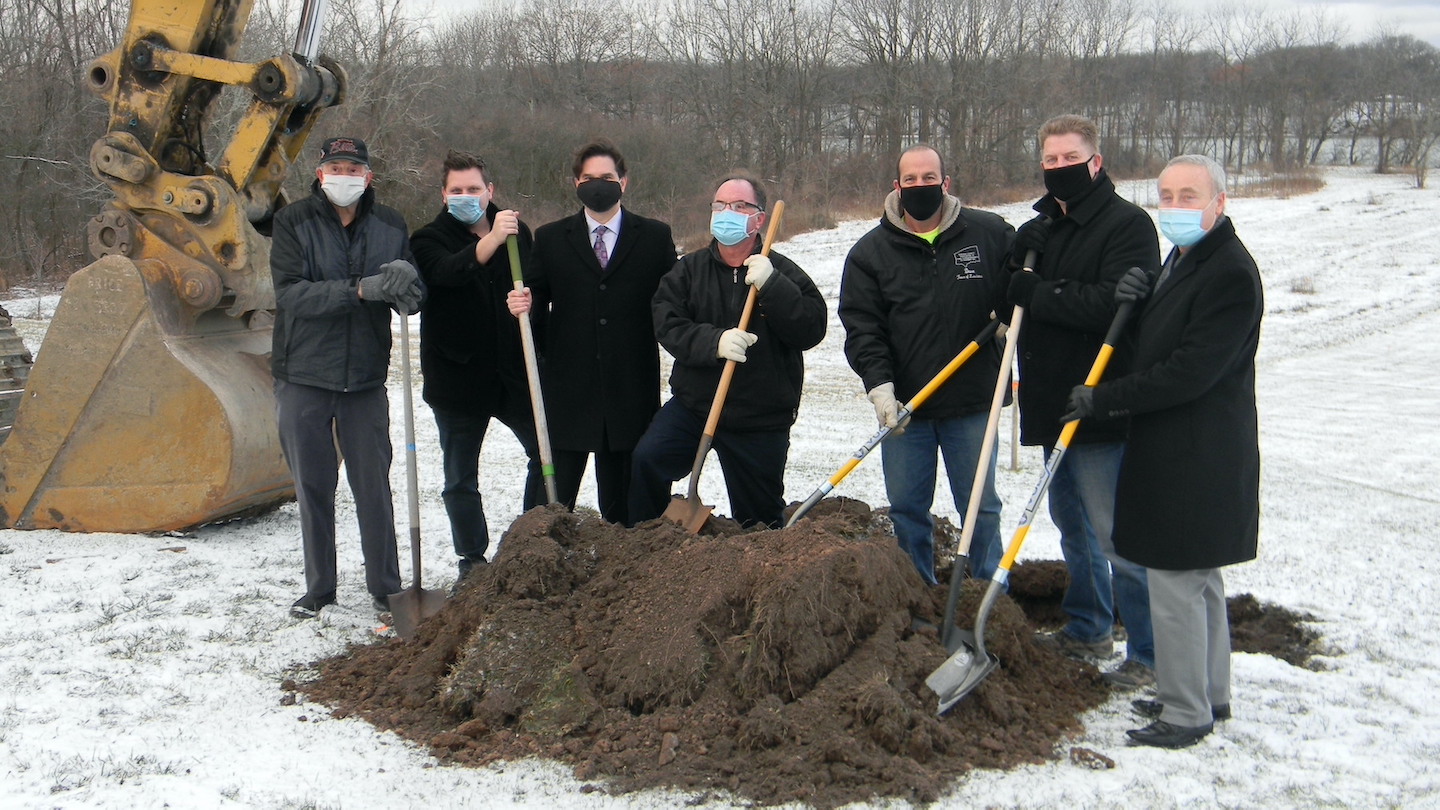 Town of Lewiston: Turning the dirt at River Road Park. The Town of Lewiston officially began work on its new riverfront park across from the Lewiston Senior Center last week with a turning of the dirt by town officials. Shown next to an excavator at the groundbreaking are, from left: council members Bill Geiben and Jason Myers, newly appointed Attorney Al Bax, newly appointed Councilman Rob Morreale, Highway Superintendent Dave Trane and Town Supervisor Steve Broderick. Look for the construction activity at the Lower River Road Park to intensify over coming months. (Photo by Terry Duffy)

Change made to town’s residency requirement

Lewiston Town Board members began the process Monday of getting the town’s now-paused recreational programs restarted for 2021. Included was approval for Recreation Director Mike Dashineau to fill a part-time recreation clerk/typist position currently unfilled, and to begin planning for the town’s youth baseball and softball programs, as well as the anticipated hiring of a recreational leader and rec program aides.

It was among the various personnel actions that occupied potions of the board’s January regular meeting.

Leading off was a public hearing to approve a $10,000 salary increase for Lewiston Superintendent of Highways Dave Trane, who was appointed as parks director for 2021 at the board’s reorganizational meeting earlier this month. The change spurred the need for board approval of a local law to provide for Trane’s added duties.

“The proposed local law increases the salary of the highway superintendent for the year 2021 only, for compensation related to the additional duties of acting as superintendent of parks,” the measure read.

With no comments from the Town Hall hearing that was also held online via Zoom, the board went on to procedurally approve the law, first issuing a “negative declaration” on the measure to abide to state regulations and then approval by a 5-0 Town Board vote.

Other personnel-related action that night included a resolution by Councilman Bill Geiben to amend the town’s residency requirements to allow for the hiring of town employee candidates from neighboring municipalities, including the towns of Porter, Wilson, Cambria, Niagara and Wheatfield, as well as the City of Niagara Falls.

“We’ve had some issues where a candidate … was not able to move into the town” due to lack of available housing, Geiben said. “So, I think it’s good for us and good for the employee if we do this.”

Town Board members came out in support of the measure, which went on to be approved.

“Bill and I have talked about this, I talked to Rob Morreale, I talked to John Jacoby, I talked to Jason. We definitely had some issues with it. It was brought up in one of our union contracts,” said Town Supervisor Steve Broderick, adding the town has opted to address the matter via changes in its town handbook.

Broderick said Lewiston was the only town in Niagara County that had a residency requirement.

“I think that opens our talent pool,” Councilman Morreale said. “We have a bigger choice of people that we can bring in. It’s really a no-brainer; I don’t know why it took us so lone to do it.”

He and Councilman Jacoby said the change will also help Lewiston with readily using outside help from neighboring municipalities in the event of an emergency.

Broderick said the town would be notifying county Civil Service of the update.

He said the town would be connecting with the Town of Porter line this week. He anticipates a July completion for the project.

•Budget/Finance Officer Jacqueline Agnello received board approval for 10 2020 budget revisions and two 2021 budget revisions as presented. Agnello said she also issued a request for proposals to lenders on Jan. 22 with the intent to refinance a 2013 town serial bond of $5 million, due in 2033, with hopes for the town to obtain a lower interest rate.

“It’s an opportunity to save money,” Broderick said as the board went on to approve the request.