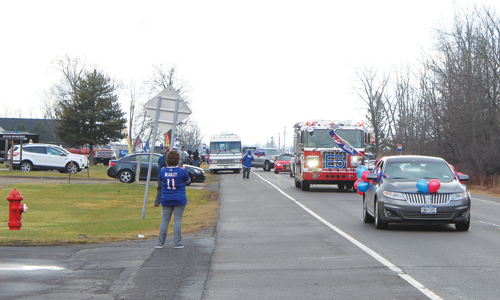 The parade takes off from the Viking Diner to pursue a route through Grand Island streets and neighborhoods. (Photo by Nathan Keefe)

What started as a whim turned into a mile-long parade of cars circling the Island in a pregame support of the Buffalo Bills on Saturday.

Parade organizer Patty Wagner said she was amazed at the response to her idea, after reaching out online to see who was interested in joining.

“I couldn’t believe the support that we got! Somebody mentioned over 100 cars – I can’t believe it. I thought it would be just me and five of my crazy friends,” she said.

“I think our community, we’ve been so used to so many good events during the year that we missed out on. I put the word out and everybody was just chomping at the bit to get together – but safely,” Wagner said.

A party atmosphere began to grow Saturday morning as participants arrived at the Viking Diner, the starting point, and decorated their cars in Bills colors. Tracy Senn got in the spirit by writing, “Let’s Go Buffalo” on the side of her car.

When cars began filling the diner’s parking lot well before the noon start of the parade, Wagner got an inkling it might be a bigger deal. Then someone pointed out to her that cars were also lining up along Grand Island Boulevard and nearby parking lots.

Chris Johnson brought his family along. “We saw it on social media that they were organizing the event and I thought it would be a good idea to bring the kids to let them see how the community comes together and rallies behind our team,” he said “Beautiful day for it, and drive around some neighborhoods and beep the horn and get people fired up for the game.”

Phil LeFevre of Step-In-Time Studio of Dance provided the music and sound for the parade. He said Wagner had called his wife, studio owner Deby LeFevre, earlier in the week. “She’d seen us in the parades. We do the Fourth of July and the winter parade every year and we have the music going. So she asked if we’d be willing to do it, and of course – great, we’d love to do it!” LeFevre’s audio also included vintage clips of game play-by-play commentary by the late Van Miller, WIVB-TV sports director and “Voice of the Bills.”

Islanders couldn’t miss the parade as it launched down Grand Island Boulevard, complete with a Grand Island fire truck blaring its siren and enthusiastic participants beeping their car horns. As the parade weaved through streets and neighborhoods, residents showed their support on the sidelines, dressed in their favorite Bills merch.

Grand Island fans were rewarded for their enthusiasm, as the Bills went on to beat the Baltimore Ravens 17 to 3 later Saturday. The team will face the Kansas City Chiefs at 6:40 p.m. Sunday, Jan. 24, at Arrowhead Stadium for the AFC Championship. TV coverage will be on WIVB-TV, Channel 4.

Organizers said that due to the “phenomenal support,” a second parade is planned to take place at 1 p.m. Sunday, Jan. 24, starting from St. Stephen’s back parking lot, no earlier than noon to be respectful of the Mass. The parade route is to be determined.

COVID-safe protocols will be used, and no tailgating is allowed. 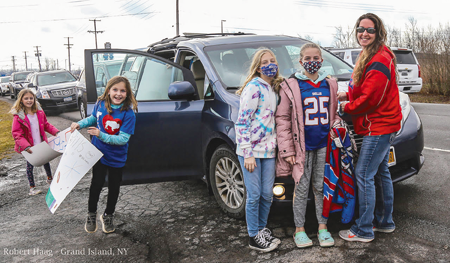 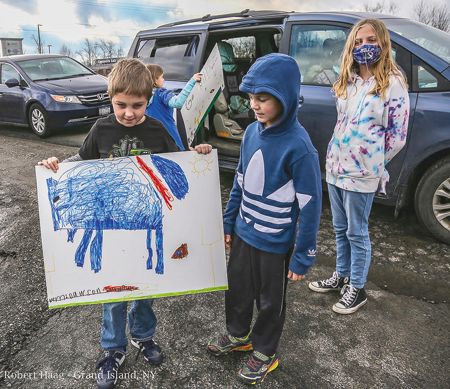 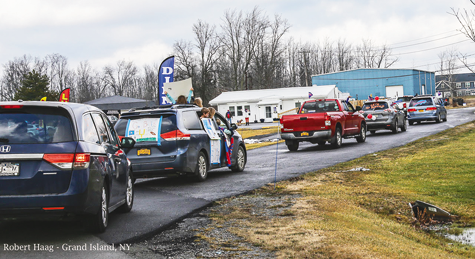