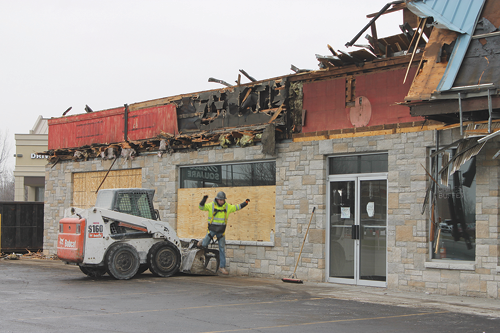 Mulvey Construction of Lockport, general contractor on the renovation of the entire Town Hall Square Plaza, gets to work Thursday on demolishing portions at the northern end of the plaza that were damaged by a November 2019 fire at Tai Pei Chinese Restaurant. The restaurant will reopen once it completes interior decorations and the installation of new equipment. The project, targeted for completion May 1, will include a new façade from the windows up. (Photo by Karen Carr Keefe)

Multimillion-dollar renovations due for May completion

As president and CEO of his family’s 73-years-old Consumer Beverages, Neil Kavanaugh is always looking for favorable strips of commercial property throughout Western New York. While driving on Grand Island Boulevard 30 years ago, he found one in the Town Hall Square strip plaza, which he calls “the perfect location” on Grand Island.

“That market has always intrigued us, but that property has such a strategic location in that it is directly across from the Fire Hall and Town Hall and at the intersection of Baseline Road and Grand Island Boulevard,” he explained from his Consumer Beverages office in South Buffalo. “You can hardly live on the Island without going past that location in any given week.”

He believes that is a big part of the reason the 10 storefronts at 2275-2315 Grand Island Blvd. have remained filled since he purchased it. That was until November of 2019 when a fire gutted the Tai Pei Chinese Restaurant at the northern end of the plaza.

Until this week, renovations to the restaurant had been delayed because of the COVID-19 pandemic. Now, Kavanaugh said the real estate division of his company has begun a multimillion-dollar renovation of the entire plaza that will include a new façade from the windows up. Barring weather and COVID-19 issues, the project is expected to be completed by May 1. Soon thereafter, the restaurant will reopen once it completes interior decorations and the installation of new equipment.

“We have always admired the community and people of Grand Island,” Kavanaugh said. “This work is a continuation of what we began four years ago when we put a new brick face on the store fronts, new sidewalks and a new parking lot. We are confident the residents will be pleased with the new look of the plaza.”

Since his company owns 18 Consumer Beverage stores, Kavanaugh has been asked if the plaza would house another one.

“That was not the intent when we purchased the plaza and, now with all the stores leased, there is no room. That thought, though, is always dangling in the back of my head as a location down the road for a Consumers Beverage,” explained Kavanaugh, who cut the ribbon on a major renovation of a store on Niagara Falls Boulevard in Niagara Falls last March. In addition to a Consumer Beverages location, the renovated property includes a BankOnBuffalo branch and two other storefronts, including Papa John’s Pizzeria.

“We are very happy with that project as we made some significant improvements to that plot of land,” he explained. “Having the support of BankOnBuffalo as our premier tenant is just fabulous.”

Kavanaugh is equally excited about adding to the current renovations along Grand Island Boulevard and throughout the Island.

“It is very exciting to see everything that is happening there,” he said. “We believe in Grand Island and we truly believe it will continue to grow.”

An artist's rendering of the plaza renovation.