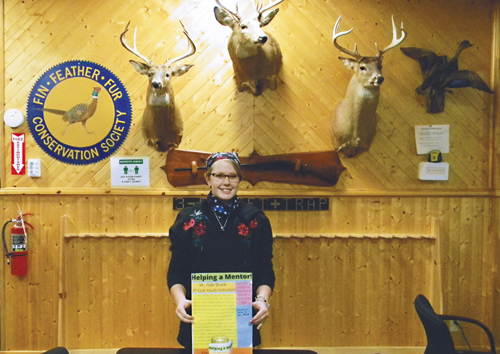 Eighth-grader Rayn Cooper with her "Helping a Mentor" fundraiser now underway in the River Region.

Ransomville eighth-grader has fundraiser in honor of 3F mentor

Rayn Cooper of Ransomville, an eighth-grader at Wilson Central, is currently doing a neat project – and she’d like your help.

Cooper is selling wristbands and taking donations in the community with proceeds going to assist Dale Shank, a youth instructor with the Fish, Fur and Conservation Club in Lewiston, who is now battling cancer.

“I am raising money for the VA and Roswell in honor of Mr. Dale and what he’s going through, since he’s made such an impact on my life and what I do,” Rayn said.

A poster titled “Helping a Mentor” tells the story.

“I am raising money for my local mentor of the 3F Club. Mr. Dale has cancer. He is a Navy Vietnam veteran and is receiving treatment through the VA and Roswell. He uses his skills and trains the youth at the 3F Club how to be good and respectful hunters,” she wrote. “He is one of the nicest people you will ever meet. He is part of the pheasant program and takes youth hunters out to hunt often. He can make people smile as soon as he walks in the room. Mr. Dale is one of the best people and deserves all the love and appreciation in the world.”

Rayn is the granddaughter of 3F board officer Chris Cooper. She plans to start selling wristbands to her classmates at Wilson Central and is now accepting donations at various locations in the River Region, including the 3F.

“Once I am done selling them and all the extras, I’m planning on taking (more donations),” she said.

Rayn began her donation campaign just before Christmas and intends to continue it into winter/spring of 2021. Thus far, she said the reception from the community has been good.

“It’s been pretty good actually. The jars are working really well, especially here (at the 3F). I’m getting about $50 per week. I’m planning on getting $1,000, and hopefully over it,” she said.

In her young life, Rayn has become a strong advocate for cancer research.

“Two years ago, I did ‘Bald for Bucks’ and I ended up coming in third in Western New York, raising $4,125,” she said. “I did pretty much the same thing with the (donation) jars. … I went to the Masons and the Presbyterian Church” to raise funding.

“The reason why I’m doing this is charity is a big part of what makes me happy to do it,” she said.

Rayn went on to recall the earlier projects such as “Bald for Bucks” and her wish to do what she could to help cancer victims and support cancer research.

“I remember when my mom, she was on Facebook and a saw a video of a 3-year-old girl. She was all sad of these little kids who had cancer. So the little girl shaved her head and she raised for it. So, I that got the idea with me to do ‘Bald for Bucks.’

“Around Thanksgiving, I was thinking about how I did ‘Bald for Bucks’ and how it changed a lot. … It made me happier to do it. And then I thought about Dale and how he’s helped me.”

Prior to the COVID-19 pandemic, Rayn was an active member of the 3F Youth Club.

“I was downstairs with Dale and I was shooting at the targets, getting better, and he was one of the few people who kept telling me that I should keep going,” she said. “He is an amazing person. I have been discouraged and told that I shouldn’t be shooting because of my gender, and I went to him, because he has helped me get into this.

“He helped assure me that, even though (there’s) … people who will doubt that I can do it (firearms training) … I should keep going, because that’s what makes me happy.”

Rayn is a skeet shooter at 3F as well as one of the kids who gets a chance to go out in the back property at the 3F Swann Road facility to shoot pheasant.

She has the full support of her parents, who admire what she does.

“I absolutely love it. She has always been a go-getter and it started with the ‘Bald for Bucks’ and the people that make an impact on her life, who she cares about extremely,” said her dad, Ryan Cooper. “It started with Mr. Dale, what Mr. Dale was going through. She was very upset and wanted to do what she could. Everything is her idea; her mom and I just run with it.”

“I am at a loss for words,” grandfather Chris Cooper added. “It shakes me up; I have one of the best granddaughters in the world.”

Ryan said her fundraiser continues until early spring with a March 7 pie-in-the face fundraiser in the works at Wilson Central. The bracelet campaign is expected to extend to the end of April.