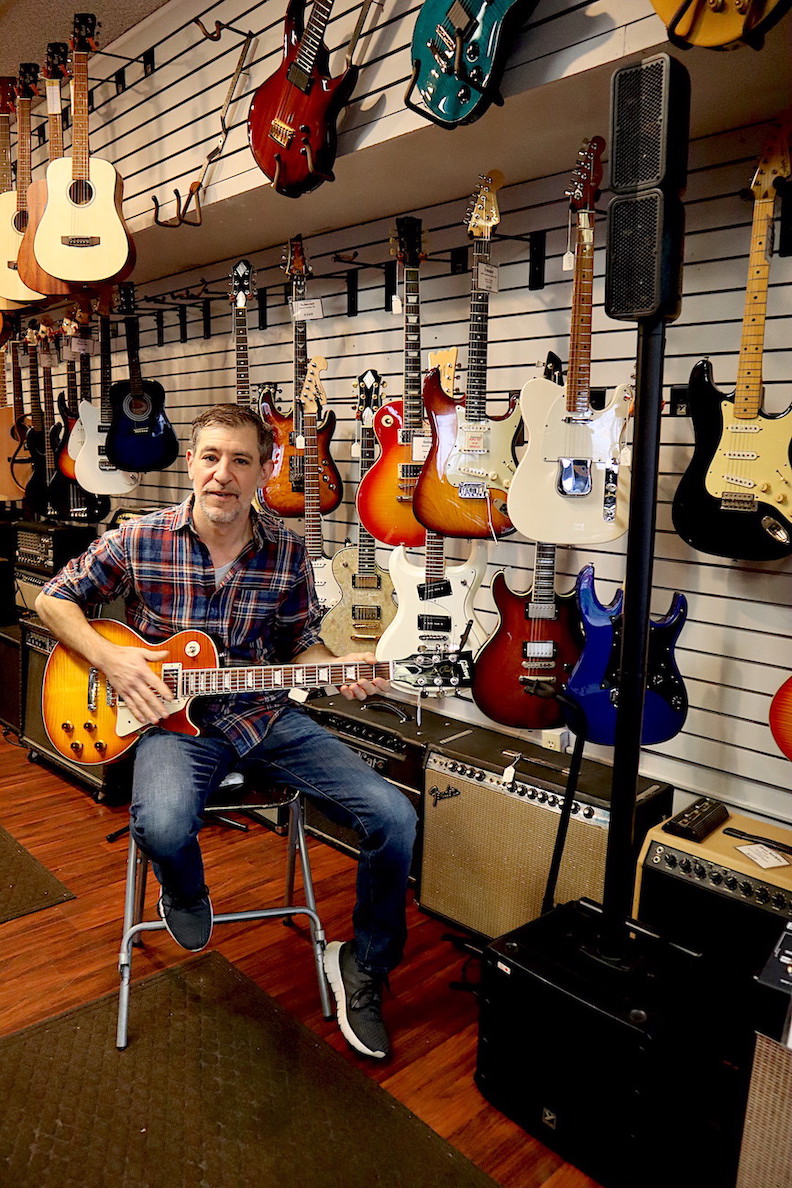 And the band played on: Lewiston Music finds a new home in Town of Niagara

“Music knows that it is, and always will be, one of the things that life just won't quit.”

That sentiment, expressed in Stevie Wonder’s 1976 classic “Sir Duke,” has, perhaps, never rang more true than it does today.

Much has been made about how the pandemic decimated the live music industry in 2020, stymieing one of the oldest outlets for human expression and delivering a major blow to the collective psyche. Yet, the need to play and create music is persistent and may be more important now than ever before.

Because of that, it’s potentially a good time to be a music store owner. That is, if one can weather the pandemic’s economic impacts.

Fortunately for area musicians, the much-loved Lewiston Music has done just that – albeit with some significant changes.

The store, which has been operated for the last 14 or so years by owner Tony Petrocelli, recently reopened in a new location in the Town of Niagara. After shutting down in Lewiston (like many other small businesses during the pandemic’s onset), Petrocelli made the decision to relocate to 2440 Military Road (across the street from Firth Jewelers).

Although the pandemic forced his hand in some ways, Petrocelli says the move was something he had been considering for some time. Not only is the rent more affordable, the additional visibility to potential customers is substantial.

“There were about 5,000-6,000 cars a day that drove by my Center Street store. It's about 25,000 cars a day that drive by here,” Petrocelli says. “So when I weighed out the difference in traffic, versus the rent, versus how close we still are to Lewiston technically, I figured this was a good way to get in front of more folks – but still maintain a relationship with all my Lewiston customers, because we're only a few miles away from Center Street.”

Potentially alienating his longtime customer base and community was among the biggest reservations Petrocelli had before moving. However, the decision seems to be going over quite well so far.

“When I was gonna move and tell the people I was moving, I was afraid of the backlash. ‘Oh, you're leaving? You’re leaving the town?’ But it was like 98% of the people I told said, ‘Oh, that's actually closer for me!’ ‘Oh I'm in the Town of Niagara!’ ’I Just live off a Hyde Park!’ So, unless you were down in the Village of Lewiston, this is probably actually a better spot,” he says.

When asked how the pandemic has affected business, Petrocelli says it's been something of a double-edged sword.

“It's very positive and negative,” he says. “The negative obviously is … such a huge part of my customer base was guys that played live all the time. They had to replace their strings every week because they play out a ton or, they're playing a bigger place than usual so they needed to rent a bigger PA system or some lights, you know? ... When musicians are playing and making money, they're more likely to spend money on equipment.

“The other side of that has been, I think in the lockdown, a lot of people have looked in their closet and saw the three guitars that have been sitting there forever and you decided to take them out and, one by one, they brought them in and they got them fixed. I think people are playing more at home, so ... I definitely see more people interested in just, you know, an acoustic guitar to play at home; an inexpensive keyboard; some simple basic recording equipment. …

“So it's been a bit of a trade-off, but I do think it's been a good opportunity for people that always say they don't have time (for playing) to go back and revisit it and enjoy it as a hobby since they’re stuck at home.”

The most negative impact on the business has been the decline in in-person lessons. Petrocelli says the Center Street store had around 112 students before the pandemic. Now, despite implementing safety measures including Plexiglas dividers, that number has dwindled down to around 30. The store also has experimented with online lessons.

“It's just kind of a balancing act now, keeping our head above water until things kind of calm down a little bit or a vaccine gets out and everybody's comfortable going back to lessons,” Petrocelli says.

Still, he remains optimistic for the future. And looking at how far the business has come since he took over in 2006, it's not difficult to see why. Having left a pharmaceutical job that he despised to gamble on his dream, the early days were certainly tough going.

“It was really like, ‘Let's just let's try it out and see what happens.’ I started off with nothing. I had like four guitars, a drum set, a keyboard and some lessons,” Petrocelli says. 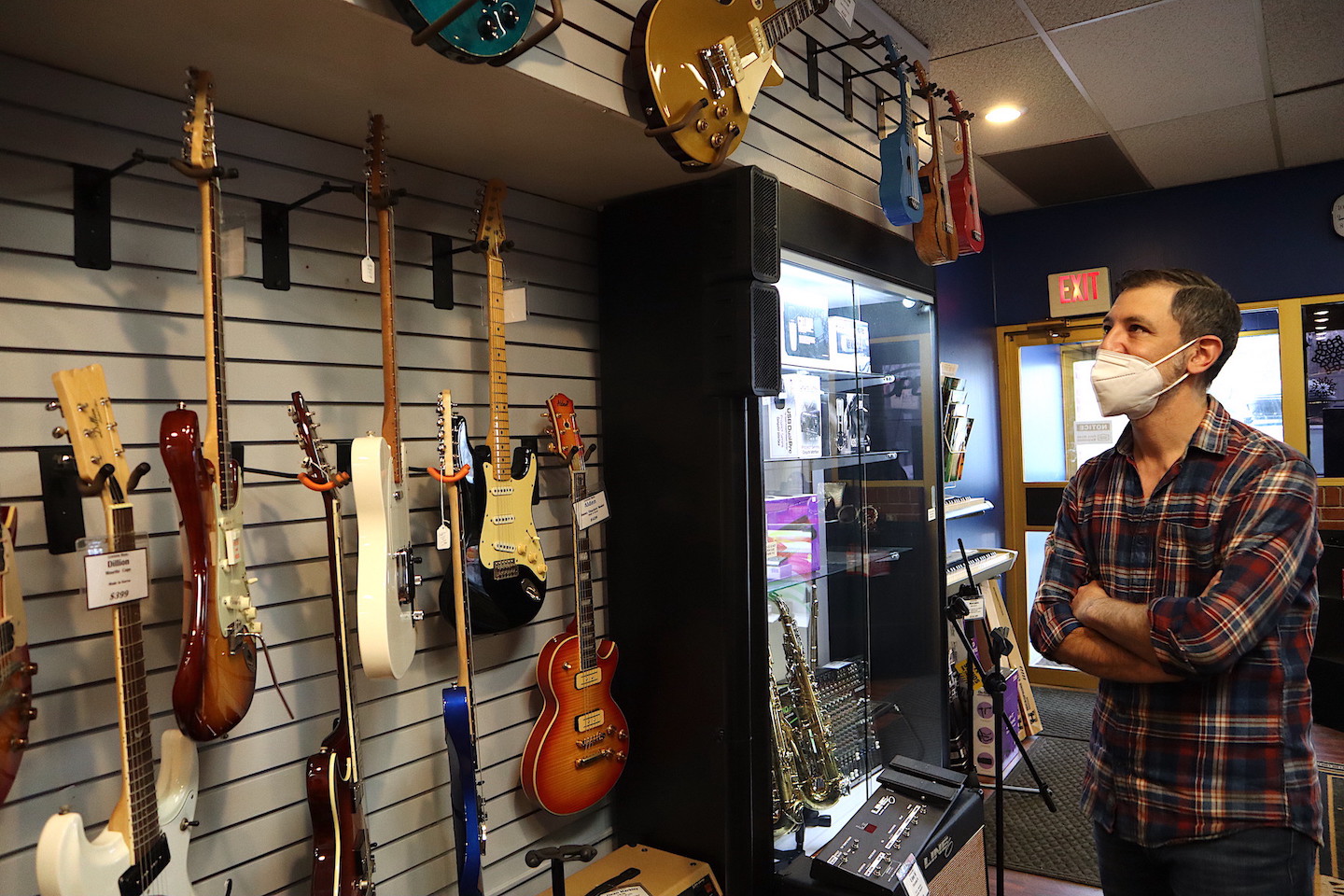 Lewiston Music owner Tony Petrocelli stands in front of a wall of guitars at his new Military Road location.

Living in Orchard Park during that early period, Petrocelli says he and his dog often slept in the back of the store overnight to avoid the long commute home. Then, not long after opening, he had to weather the 2008 recession. Still, he persisted and ultimately, persevered.

“Slowly, year after year after year, we kept building up, moving to other places. … Sometimes I just look around and go, ‘How did this even happen?’ ” he says.

The success was largely built off the store’s reputation for customer service, something the store has been widely renowned for and something Petrocelli has strived to provide, even if it has meant taking a financial hit here and there.

“I act like every customer that walks through the door could be the potential last customer I ever see,” he says. “In the long haul, even if you do a couple of transactions where you don't make a single penny, to me it's more of an investment down the line. Like somebody comes in and they need a quick little thing fixed on their guitar, you could say $15. But I always just go, ‘You know what, just come to us next time and tell somebody that we did something nice for you.’ To me that's more worth the 15 bucks in the moment.

“I’ve had a lot of people telling me, ‘Well that's not how you run a business. You gotta charge for your time.’ But over 16 years, I feel like that's proven to me that that's the way to go, because you just keep people for life; and if people say good things about you and spread the word, then that brings in more business. So maybe I lost $10 right there in the moment, but I know that person's gonna come back to me every time and they're hopefully gonna tell a few people. … I've just always had that philosophy and, to me, I think it's worked out.”

Success has also come from building partnerships and rapport with the community. Today, that reputation is paying off as the store has already found support in its new neighborhood.

“I'm building relationships and making inroads with the school district, so now we're the official place for all the kids to bring their repairs; or if they need books, mouth pieces, reeds – any of that stuff. All the teachers for the Niagara Falls School District have asked (students) to come here, which is great,” Petrocelli says. “I've also been working a ton with a lot of the churches locally. Just trying to help them clean up their sound system, get the stuff out of there that's broken, kind of bring things up to date for them – which I've always kind of done from Lewiston, but I feel like, now that I'm down here, I feel more a part of the Niagara Falls community; and I think they feel like I'm more a part of it.”

With everything that’s transpired over the last year, Petrocelli is now gearing up for the busy holiday season, something he enjoys immensely.

“It's like playing Santa. People ask me ‘Hey, can I stash this here until Christmas, because they don't want to hide a drum set at the house. So it's kind of fun. Or, a wife comes in and she gets something for her husband – except I'm not a lot to take it off the wall, because he comes in every other day and, if it was off the wall, he would know. So, I put ‘Sold’ on it and write somebody else's name on it. The crazy stuff like that. It’s fun.”

The big sellers this time of year are gifts for beginners. Lewiston Music is currently selling acoustic-electric guitar kits for under $200 and beginner drum sets between $200-300.

Looking ahead, Petrocelli says he has a lot to look forward to and be thankful for (not the least of which being the new baby he and his wife welcomed in November.)

“We're just happy to be here and be open and doing what I want to be doing,” he says. “There was a lot of sitting around for five months, a lot of moving and arranging and building lesson rooms and, you know, just trying to get settled in. Now we’re here and we're getting there. It’s nice.”