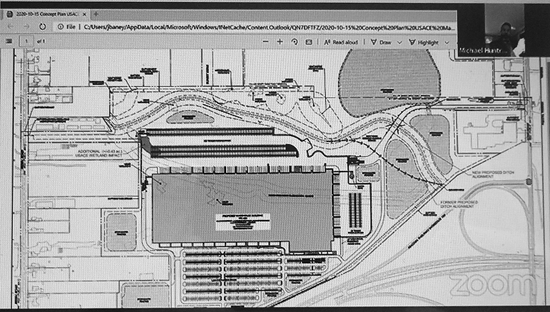 This image was presented to the Town Board last week. See Mike Billoni's article (link below) for more information.

The group whose opposition may have helped sink Amazon’s proposed Grand Island distribution center last summer is taking aim at a new warehouse that was proposed last week to replace the one that got away.

During the Dec. 7 livestreamed Town Board meeting, members of the Coalition for Responsible Economic Development for Grand Island (CRED4GI) spoke out against what they say are potential negative impacts of the new warehouse proposal.

On Dec. 3, Acquest Development Vice President Michael Huntress presented the town a site plan for a nearly 1.1-million-square foot, one-story warehouse and distribution center on the property Acquest owns. The company had hoped Amazon would develop the property, until the retailer withdrew its application in August.

Huntress said the newly proposed plan for the parcel, off the Thruway between Long and Bedell roads in northwest Grand Island, would require no zoning variances and would fit into the town’s master plan. He also said the new project would update the design created for Amazon’s “Project Olive” by Langan Engineering, but would reduce the height of the facility to 45 feet to comply with town limits.

CRED4GI board member Michael W. Rayhill told the Town Board he doesn’t agree that the preparatory design work done by Amazon provides a head start to approval of the Acquest proposal.

“Using the logic that this new Acquest warehouse should be summarily given a stamp of approval based on its supposed resemblance to the Amazon warehouse is misguided and misleading to the public, whose views should be formed by detailed analysis of the new project, instead of based on inherited assumptions,” he said.

“How is increasing the footprint of this new warehouse by 250,000 square-feet – a third more than the Amazon warehouse – not a good reason for further investigation as to the public and long-term community costs this project is likely to impose, for a project that doesn’t have a single dedicated tenant,” he said. “Speculative development should not be undertaken lightly.”

Huntress maintains his company’s decision to pursue the project is based solely on “a very big demand for high-bay warehouse space” throughout the country.

CRED4GI spokesperson and board member Cathy Rayhill said, in a press release issued before the meeting, that Acquest’s project potentially contains substantial impacts to the Island’s quality of life, including traffic, health and impacts to wildlife, migratory birds and the Niagara River. She said her group “believes that the proposed warehouse facility is far too large, does not fit with the general character of the surrounding community (as per the comprehensive plan) and will have even more traffic, air/noise pollution and negative environmental impacts (than) the previously proposed Amazon facility.”

CRED4GI fellow board member Dave Reilly agreed. “These are very different projects with unique impacts,” he told the Town Board. “This project has the potential to be extremely consequential for our community and environment.”

He urged the Town Board to require a new scoping process for evaluating the impacts of the new Acquest proposal “to ensure that environmental factors are incorporated into the planning and decision-making process at the point in which the information will have a real impact.”

Cathy Rayhill said Wednesday that CRED4GI constituents, who number about 2,500, have different ideas than Huntress about what kind of development is more in keeping with the neighborhood surrounding the parcel in question.

“Part of the challenge for Town Board officials, as well as residents, is in the nondescript definitions of our zones in our code; because when we look at the fact that this property that Huntress owns is zoned M-1, many of our constituents … say that’s light industrial, and I believe there’s a part of the town code that even talks about multiple buildings in a parklike setting, which are in character with the surrounding community. And yet, people like Huntress say building a million-square-foot warehouse is ‘right of use’ and part of that zone,” she said.

“If we had more teeth in our zoning laws and had more descriptive limitations or requirements for those zones, other than a rather nebulous description like that, I think the interpretation of what is appropriate for those zones would be easier to discern,” Cathy Rayhill added. “I think that is the cause of a lot of friction and is something that I think, at the end of this, we really should take a bigger, deep dive into and make sure that we are very descriptive about what’s appropriate and what’s not.”

In other business, the Town Board:

•Held a public hearing on Local Law Intro No. 13, proposing rezoning a portion of the property at 2495 Grand Island Blvd., from NBD, North Business District, to R-1D, medium density, single-family residential district. The proposal was tabled and there were no speakers at the public hearing.

•Approved a request by Highway Superintendent Richard Crawford to sell town-owned surplus equipment at auction in fall of 2020.

•Referred to the Planning Board a request from Advance Design Group on behalf of BayWa r.e. Solar Projects LLC for exception to subdivision regulations, to split one lot off an existing parcel at 2356 Whitehaven Road.

•Approved a change order increasing costs by $19,249.74 for a Towerwood/Bronson/South Parkway waterline replacement.

•Approved a special use permit renewal for Redbush Meadow LLC to continue to operate a dog kennel at 2120 Alvin Road.

•Tabled a special use permit application from NYSOLAR LLC for a solar energy farm on a recently created lot next to and behind 2585 Whitehaven Road.

•Approved a special use permit renewal for Auto Fix of Grand Island LLC, at 2038 Grand Island Blvd., to continue the service of auto repair.

The Town Board voted to suspend the rules to introduce three new actions that were not originally on the agenda, in which council members:

•Approved a change order up to $90,000 for repair of a Whitehaven Road water storage tank.

•Set a public hearing for 8 p.m. Monday, Jan. 4, on a proposed local law that would put a moratorium on solar projects. In the public comment on agenda items, Cathy Rayhill said about the number of solar farm applications in the past two years on Grand Island: “I am not inherently against installation of solar power facilities to offset the use of fossil fuels for energy production. However, I am concerned as to the overuse of green space on Grand Island to achieve these goals and the lack of compliance shown by developers of already completed projects.”

She said the town has approved four solar array projects on Grand Island so far, three of which are operational, and one application is pending. Cathy Rayhill said these five facilities would use over 100 acres of green space to generate the approximate energy used for about 4,000 homes. She said the first three projects have failed to implement all the necessary mitigation measures, including screening, “without any remedy being pursued by town officials.” She encouraged Town Board members to consider a cap on the number of solar projects that can be approved on Grand Island.

She and others who spoke during the virtual meeting thanked Supervisor John Whitney and the Town Board for implementing informational meetings for better dialogue and awareness of project activity on the Island.