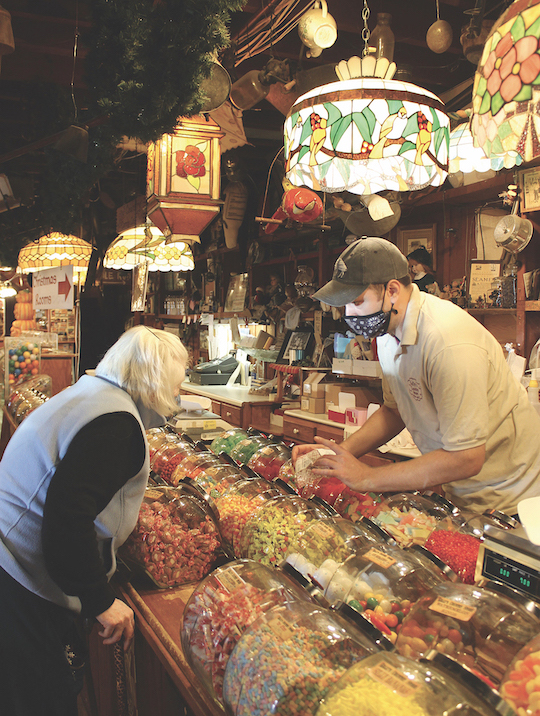 Kelly's Country Store Manager Adam Kelly shows a selection of chocolate candy to Sharon Hummers of Garden City, Long Island. Kelly's has sponsored a series of "Food & Fun" events on Fridays and Saturdays this fall, in lieu of a traditional Fall Fest, which couldn't be held earlier this month, as planned, because of COVID-19 regulations. Another "Food & Fun" event will be held this Saturday, Oct. 17, at Kelly's, and a "Trunk or Treat" drive-thru event will be held from 2-4 p.m. Oct. 24, alongside the petting zoo, food trucks and vendors. Volunteers can bring their vehicles, park in the lot, and share the treats they bring with families who attend with their kids.

‘Fun & Food’ Saturday features critters from Niagara County Down Under

When the pandemic threw a monkey wrench into its traditional Fall Fest, Kelly’s County Store hopped to another model that has brought kangaroos, kids and customers together for a series of weekend “Fun & Food” events.

Store Manager Adam Kelly said that when their planned Oct. 3 festival was no longer viable amid state regulations, they pivoted to “Food & Fun” events instead, to fit new state rules. The events are held at their store parking lot, 3121 Grand Island Blvd.

“The biggest attractions at our Fall Fest were the petting zoo, the bounce houses, the face painting – which was the stuff that was a little too hands-on, and obviously we can’t do that with COVID going on and feel safe about it,” he said. “So the whole ‘Food Truck Saturday’ event started in the fact that we were doing ‘Food Truck Fridays.’ But on Fridays, people have to come in after work, and the timing wasn’t really working out because it was getting a little bit colder, a little darker too early.”

“So we just decided to do the ‘Food Truck & Fun’ in lieu of a fall festival this year,” Kelly said. “We still want to give people something fun to do – family events – we really just like to see people having fun in our parking lot. Whether they end up coming in the store or not, it’s really just about putting on something to come out for.” 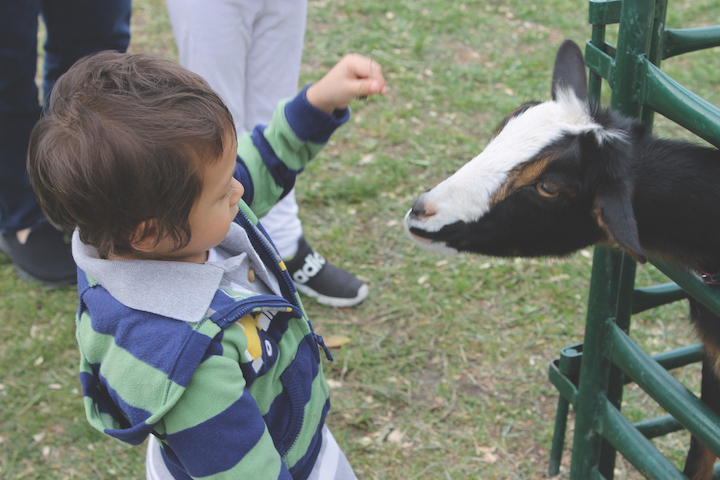 Lennox Keefe, 3, holds a piece of straw in front of a goat at “Food & Fun” Saturday on Oct. 10 at Kelly’s Country Store.

Niagara County Down Under has been one of the standby attractions at Kelly’s Fall Fest, and naturally, it signed on to the “Food & Fun” Saturdays. Its petting zoo – reimagined as a no-touch, but close encounter, has proved very popular. It’s a chance for kids and their parents to enjoy meeting the zoo’s mob of red kangaroos and their babies, as well as llamas, cows, sheep, a tortoise and other animals.

Pony rides, a farmer’s market, several vendors and food trucks were all onsite at Kelly’s on Oct. 10 to add to the fun of the afternoon.

Niagara County Down Under is located along the county’s wine trail at Spirit Wind Farm. A windy afternoon at Saturday’s event didn’t discourage visitors from experiencing the meet-and-greet. Although youngsters weren’t allowed to pet the animals, that didn’t keep them from peering through the fencing to get a close-up look at the unique critters who visited for the afternoon. Social-distancing regulations were also observed for everyone’s safety during the pandemic.

Laura Kagels manages Spirit Wind Farm, where more than 100 animals reside in Sanborn. Kagels has been presenting a traveling petting zoo in Western New York communities for two decades and is working on a grand opening for an onsite petting zoo at the farm.

Kagels told WGRZ-TV news that three years ago, they introduced kangaroos at their events, and because they were such a hit with the public, they are focusing on the popular animals. The kangaroos will be featured at a 2-acre, kangaroo-themed enclosure being developed at the farm. There are about a dozen kangaroos in the mob, including two baby kangaroos, called joeys, who are a little over a year old now. 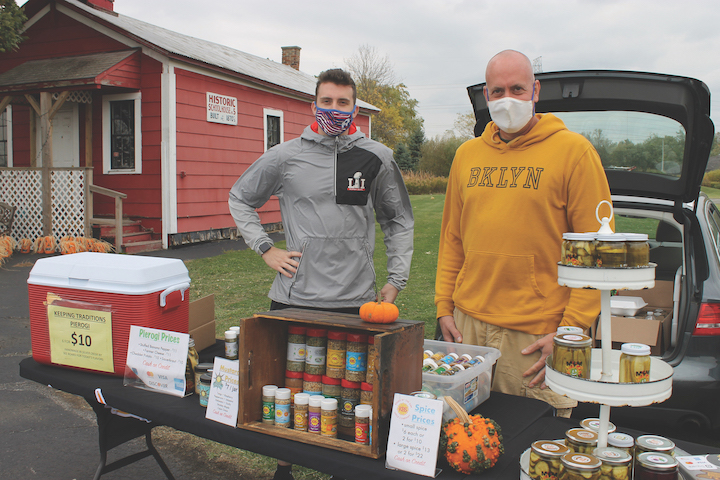 Kelly said Niagara County Down Under had been very helpful with the store’s past two Fall Fests. He said that, amid the pandemic, the petting zoo, like many businesses, has had to cope with cancellations. For the traveling animal business, it was cancellation of fairs and educational events at schools that were the mainstays of their schedule.

“So it’s just been really tough on them, so we incorporated them every single week to give them something to do and kind of get the word out there,” Kelly said.

This coming Saturday, noon to 5 p.m., will be Kelly’s fifth parking lot event.

“We try to get the vendors out there … the pumpkins, mums, hay bales, cornstalks,” in addition to the kangaroos and other animals. How long they’ll hold the events has yet to be determined, Kelly said. But there also will be a “Trunk or Treat” from 2-4 p.m. Saturday, Oct. 24, alongside the petting zoo, food trucks and vendors. They’ll have people park in the lot, have the kids dress up and share the sweet treats they bring with the families who attend.

This is the first time for a Kelly’s Country Store “Trunk or Treat.”

“It is something a little bit different. We’re going to have some of our family out there with their cars supporting it , as well,” Kelly said. “But it’s a little bit of a weird thing because, with Halloween, people think this is a huge time for us. While business definitely increases because we have the chocolate molds, we don’t have a ton of Halloween-like candy because not all the stuff is wrapped.”

“It’s fun and interesting. Anything that we can do to get happy people in our parking lot, that works for us,” he said. People who attend the “Trunk or Treat” will be supplying their own candy. It’s basically like their own trick-or-treat, but in the Kelly’s parking lot, Kelly noted.

He said the response to the weekend events has been positive, although the weather is always a factor.

“But you can’t be too upset when there’s baby kangaroos hopping around in the parking lot,” Kelly quipped. “People seem to have responded very well and they’re very appreciative, as are we, of them supporting us and Niagara County Down Under.” 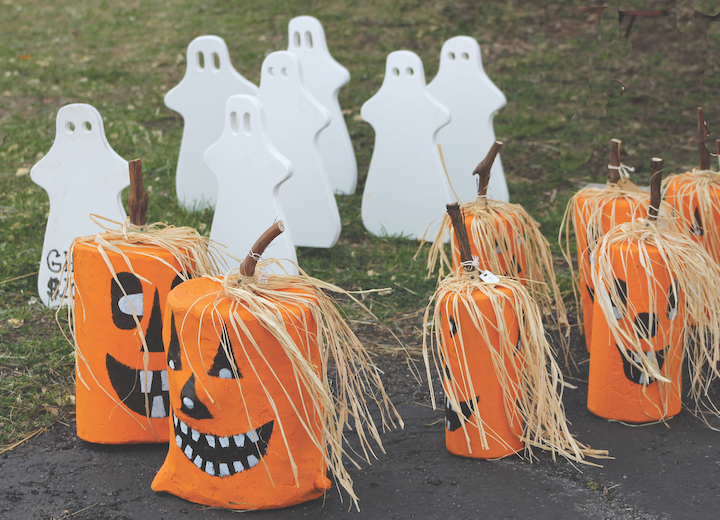 Pumpkins and ghosts created from logs by Jim Luesch of Cambria were on sale at Food & Fun Saturday on Oct. 10 at Kelly’s Country Store, 3121 Grand Island Blvd.