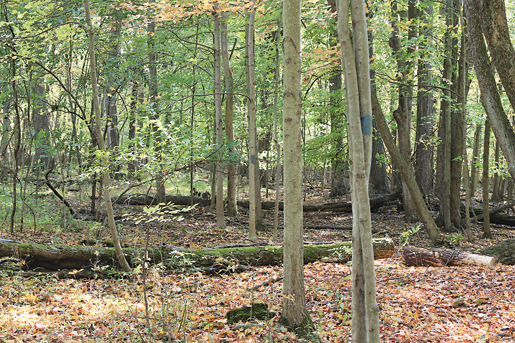 A peaceful path to nature: Writers walk the plank to an island treasure

I set off with my fellow intrepid hiker, Alice Gerard, on a sunny, breezy day last week Tuesday to find beauty and peace – and maybe a rabbit or two – along Grand Island’s newest nature trail.

We were not disappointed – except for the lack of rabbit-sightings.

We approached the Margery Gallogly Nature Sanctuary with a sense of adventure and an investigative zeal. Both longtime freelance writers for the Island Dispatch, we had never before collaborated on a story. But the time had come, and we were excited about the possibilities. How would our pairing be viewed? Maybe it would lead to comparisons with journalists Woodward and Bernstein — or the 19th century explorations of Lewis and Clark.

Or not. Maybe more like “Karen and Alice’s Excellent Adventure.”

Anyway, we agreed that the sun, moon and stars had aligned for us to take the trek, because of the great weather forecast – and our mutual interest in the environment of our hometown. Alice, a master gardener and a master naturalist trainee, has been a member of the Conservation Advisory Board since 2012, and my late mother, Joanne P. Carr, was chair for many years of the board’s predecessor, Grand Island’s Commission for the Conservation of the Environment.

The nature sanctuary is envisioned as an all-season resource – with recreational potential for hiking, snowshoeing and cross-country skiing. No bicycles, ATVs, horses or dogs are allowed. The trail can be accessed by entering Assumption Cemetery on Whitehaven Road. There’s a small parking lot for visitors. The trail begins at the edge of the forest, in the southwestern corner of the cemetery.

Alice and I observed that we had dressed for skiing, but without the snow. We sported enough layers of clothing to have enabled us to survive Ernest Shackleton’s 1921 Antarctic expedition – even though Shackleton, himself, didn’t live to tell the tale.

We also had two cameras and enough bad puns to propel us into the wilderness, or a reasonable facsimile.

The first thing we noticed as we started our journey were the parallel planks that led the hiker through a swath of the 145-acre hickory and oak forest. Alice stepped on the planks and walked slowly, taking baby steps on a surface that, to her, felt unstable.

“I’m just getting used to this – go ahead of me,” Alice said, as she discovered herself feeling a bit tilted on what appeared to be twin balance beams, sitting just about 6 inches off the ground. Attempting to restore her sense of balance, she stepped up and down the planks, at first gingerly, and then with confidence, as she acclimated to the raised walking surface. She soon realized that she could walk on the boards and take photographs simultaneously. She quipped, “That’s a very advanced skill for someone who has never learned the art of walking and chewing gum at the same time.” Alice said that once she stopped staring at her own feet, she truly enjoyed the scenery, as well as the adventure of being in this nature preserve behind Assumption Cemetery.

Good thing, too, because, before too long, we encountered other humans, who politely sidestepped to permit our passage. Richard and Kathy Swank of Eden had read about the Nature Sanctuary in the newspaper and wanted to check it out. It was a perfect day to do so. 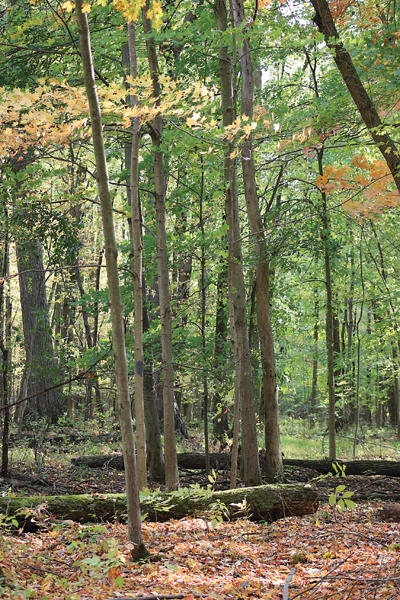 The air felt somewhat crisp and fall-like, and a spritz of orange decorated the green foliage. Fallen leaves, which formed a carpet on the forest floor, displayed a vibrant mix of red, green and russet. We found yellow and red leaves from sugar maple trees, as well as leaves from white poplar trees, yellow birch trees, oak trees, hickory trees and American sycamore trees.

Soon thereafter, we met youngsters Michael and Makayla Sia of Grand Island, 6 and 4, respectively, walking the trail with their grandmother. Shortly before the children arrived, Alice found a painted rock nestled in the crook of two tree branches. She photographed the brightly colored rock and then handed the treasure to a visibly pleased Makayla.

After the small uptick in trail traffic, it was back to the quiet solitude of the forest. The Gallogly Family Foundation, instrumental in bringing the sanctuary to fruition, calls the forest there “one of Grand Island’s most ecologically significant treasures, for generations to come.” The wetlands preserve was established so migratory songbirds, woodland animals and beautiful native plants would continue to have a home. Big and Little Sixmile creeks flow through the landscape en route to the Niagara River. The plan is to extend the trail with a foot bridge over the creek to the Nike Base on Whitehaven Road near West River Road.

True confession: I got lost in the forest on a solo hike one July 4 a few years back, and ended up on Staley Road, where I had to phone home and sheepishly arrange a ride back to my car at the Nike Base. By the time I reached civilization, my feet were sore, I was sweating profusely, and I tried to erase mental pictures I had conjured up of myself surviving for days on berries, roots and nuts.

Alice had previously walked the acreage with the Conservation Advisory Board in its capacity to review and make recommendations on proposals or applications for the use or development of any open space in the town. Members were assessing the potential land use prior to the 2018 purchase by the Western New York Land Conservancy from the Catholic Diocese of Buffalo.

“We hiked the trail before the sale actually went through, just to get a sense of what was there,” Alice explained. “We left from the Nike Base. To get there, you have to cross Little Sixmile Creek.” The creek, swelled with rain water, was running fast that autumn day. “The whole thing was very adventurous. It was very wet and muddy, which is probably why the raised boards” were installed along the trail.

Alice said one of the goals of the Conservation Advisory Board “is to increase access to nature on Grand Island, as well as to help ensure that pristine land, such as the Margery Gallogly Nature Sanctuary, is preserved in its original state, for the benefit of generations to come. This new sanctuary offers people a unique chance to enjoy nature as it has existed for many years, as well as an opportunity for ecotourism.” 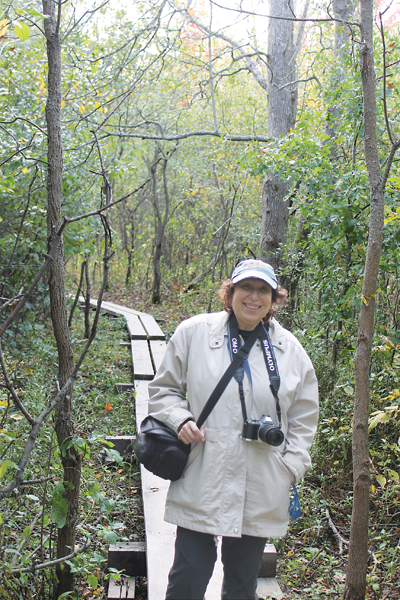