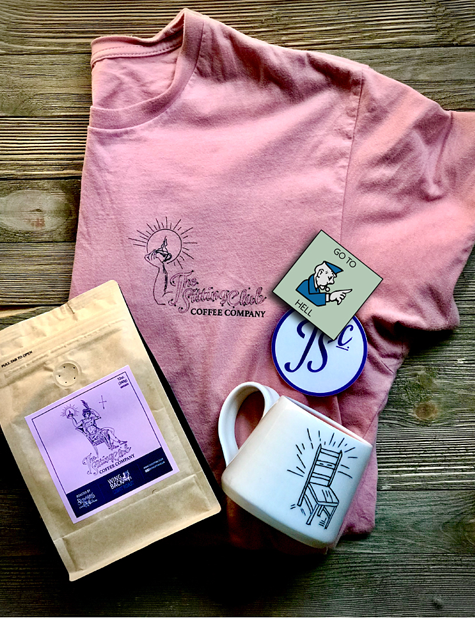 Image courtesy of The Sitting Club

When Matthew Catanese set out to start his own clothing brand, he knew he wanted his designs to be a reflection of the things that mean the most to him.

After studying design at Buff State and learning aspects of the business by interning at local screen-printing shops, Catanese founded The Sitting Club, a Niagara Falls-based apparel company, in 2016. The brand name was taken from a longstanding nickname he and his friends had dubbed themselves to commemorate their frequent late-night teenage hangout sessions.

“When I was trying to figure out what to call my brand, I was like, ‘Man, this is a great name,’ ” Catanese says. “So I started using it and started designing around the idea of, you know, chairs and sitting down and being around the people that you love; your friends and your family; trying to incorporate those ideas into the designs themselves. From there, it kind of evolved into some inside jokes and some outside jokes, about like ‘cheese cults’ and all sorts of weird things.”

The ‘Cheese Cult’ apparel (available for preorder), featuring an Illuminati-like symbol made up of a piece of cheese, is one such creation. Catanese says the whole thing simply started as an inside joke amongst friends sharing their affinity for, you guessed it, cheese.

“I just thought it was kind of tongue-in-cheek and silly. And who doesn’t love cheese (laughs)?” He says.

Those ideas of relaxing, chilling out, and not taking things so seriously are not only common design themes found on much of the brand’s apparel. It’s also become something of an ethos and philosophy that Catanese hopes others can appreciate and pass on.

It’s also because of that ethos the company is taking the next, seemingly natural step into the world of coffee.

“You know, it’s just like cheese. Who doesn’t love coffee?” Catanese jokes. “But it really just makes sense for the brand. You know, usually what you’re doing when you’re having coffee is you’re sharing the experience with a friend or loved one, or just sitting down and drinking it and trying to enjoy your morning or trying to stay awake at work. … Coffee just brings out so many things. You want to be comfortable; you want to get your day started; and I just wanted to be a part of that.

“Also I’m addicted, so it just made sense for me (laughs).”

So far, that instinct has seemed to work out pretty well. The Sitting Club debuted its Wingback Light Roast coffee back in April and it quickly sold out on the company’s website (twice). Just this week, the company also announced the forthcoming Scholar Blend, which Catanese says contains notes of licorice and cedar.

“(The flavor) just seems sort of gentlemanly; almost regal. Sort of like a Victorian-era scholar’s style. So that’s where the name came from,” he says.

The projects are a collaboration between The Sitting Club and Lockport-based cafe and coffee company Steamworks Coffee Roasters, who roast and bag the blends. Catanese says that, while the collaboration came about almost fortuitously, it’s altogether been a great experience.

“Somebody posted about (Steamworks) and I researched them; found out they were local to Western New York. So on a whim, I just kind of contacted them, asked if they would be interested in doing a collaboration and be able to build out my own blends. And they were super supportive and excited about it. It’s something they do with other people and it was like, ‘OK, let’s get started.’ ”

Amid The Sitting Club’s airy, carefree-yet-stylish clothing designs and mellowy, rich coffee blends, it’s evident that Catanese also has a fierce sense of pride for Niagara Falls, with several designs featuring a tribute to the city. Additionally, Catanese has created the branding for the community group LiveNF and, as the nationwide protests over the death of George Floyd took root in Niagara Falls, Catanese created a design to help raise money for the NF Peacemakers group.

“(Whenever someone mentions) New York state, it’s always ‘Oh, New York City.’ But it’s more than that. It’s Buffalo, Niagara Falls, Rochester. There’s a lot of really good stuff in this area and people need to cultivate that.”

In effort to help foster that community of talented artists and hardworking small businesses that Catanese feels a kinship with, he listed a number of names and businesses he hopes people could look to support besides his own. In addition to Steamworks, he mentioned Unlimited 716 apparel, Cobra Clutch Tattoo, Amy and Co. bakery, and Power City Eatery.

“I think it’s important to get a spotlight on small business owners in WNY, Niagara Falls in particular,” Catanese says. “We don’t get the recognition as a city that supports each other and its local businesses. The majority of my sales are people from the area. I wouldn’t have the business if it wasn’t for people interested in helping small business owners stay alive and make it and be a part of the community.”

For more information on The Sitting Club and its products, visit www.thesitting.club.