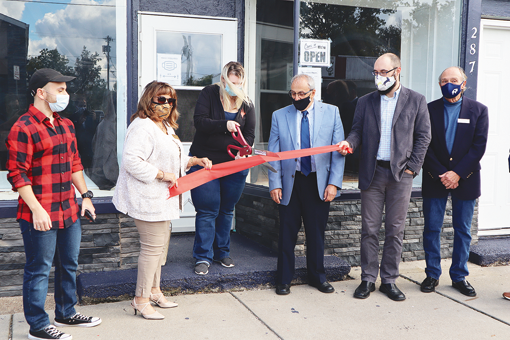 Article and Photos by Michael DePietro

Attention Planeswalkers! A new gateway to the multiverse has opened in North Tonawanda.

City officials were on hand Thursday for a ribbon-cutting ceremony marking the grand opening of the Mana Bar, a retail establishment specializing in hobby and collectible trading card games with a primary focus on the ever popular “Magic: The Gathering” (MtG). The store is located at 287 Oliver St.

Owners and North Tonawanda residents Amber Zientara and Andrew Magyar began the business out of their home as an e-commerce company, selling cards from theirs and their friends’ collections on third-party websites. Eventually, with a focus on customer service, the online business became successful enough the couple started its own website.

Now, through the opening of a brick and mortar location, the Mana Bar is looking to expand its product offerings and, eventually, host community events.

Opening a new business is challenging enough on its own, but with the additional challenges brought on by COVID-19, Zientara admits there were times the duo had second thoughts about opening.

“A lot of people think we’re crazy for opening during COVID-19,” Zientara says. “It’s already difficult to get these products because there’s such a demand for it, but when you add in COVID-19, the pandemic and the shipping issues – we’re still waiting for products from a distributor in Oregon because of everything still going on there.”

However, she says the company’s online success has not only buoyed them financially, but also demonstrated the widespread need for fun, and play.

“I think that’s one of the reasons we were able to do it because people were still looking for their hobby and the things they love, and we were able to offer them those things during (the pandemic),” Zientara says.

She also notes that, while the pandemic has impacted the MtG community’s ability to meet and play in person, players have simply begun playing the card game online via webcams, meaning sales have kept steady.

In preparation for opening their own store, the pair did a fair amount of in-person competitor research to help create the store of their dreams. Beyond local stores, Zientara says they visited dozens of stores from anywhere between Rochester, Pennsylvania and Rhode Island.

“We kind of took our favorite features and tried to combine them. ... One of the things we tried to focus on was, ‘How can we build the best store that gives the community the most of what they need?’ ” Zientara says. 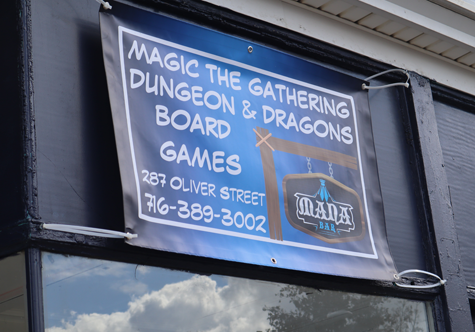 While MtG is currently the store’s bread and butter, she says it will also offer board game rentals and tutorial events for new players to try and learn new games, including, but not limited to, MtG. Zientara also says that, ultimately, they’re looking to customers and locals to let them know how the Mana Bar can serve them better.

“It’s really about meeting what the community needs and, right now, the community just needs their hobbies. They need to be able to focus on the things they like. I mean, winter is coming (laughs). We’re gonna have to hunker down together because of the weather. … I want to be that place where people can go, hang out, maybe rent a board game. I don’t care if it’s ‘Monopoly’ or ‘Sorry!’ Whatever makes people happy, that’s what I want to be.”

For those unfamiliar with what makes hobby and modern tabletop gaming so special, Zientara says it’s not just the games (which are definitely worth a try), but rather the sense of fellowship and belonging that playing them inspires.

“I started playing as an adult; I never really played when I was younger,” Zientara says. “The one thing I fell in love with – the game is kind of difficult, so there was a good challenge. But my favorite part about playing was the community. I got to see other people, meet other people. I got to talk about things they like and things they do. There was this whole community I never even knew (existed). I mean, how often as an adult can you really go meet new people? Maybe at the gym, maybe out for coffee you’ll wave at someone, but how often do you really get to sit down with someone and have a conversation and play a game? That’s what I absolutely fell in love with.”

For more information about the Mana Bar, visit www.mtgmanabar.com or visit its Facebook page at www.facebook.com/mtgmanabar/. 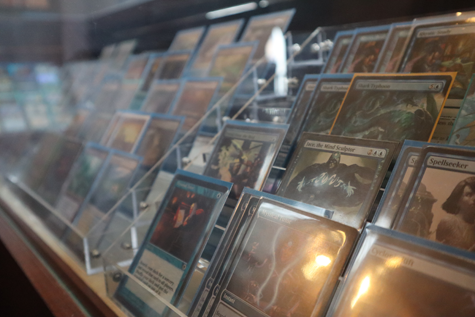 A look at some of the gaming and inventory available at Mana Bar.