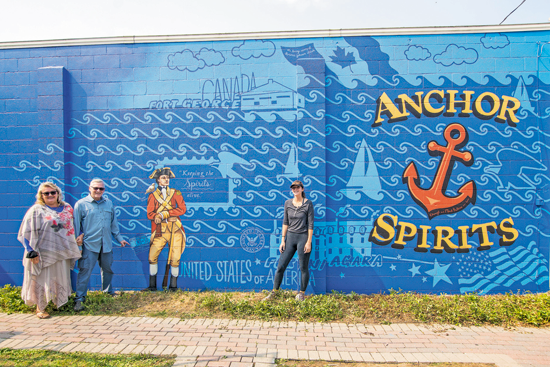 Youngstown mural: ‘Keeping the memories and positive connection to the past and the present’

Over past months, the Village of Youngstown – like countless other places – has weathered the COVID-19 pandemic. And there have also been fresh positives.

Driving through the village on Lockport Street – Youngstown’s second “main drag,” if you will – one finds not one, but two, very eye-catching, distinctive murals. Heading east from the Main-Lockport intersection just to the left beyond the Stone Jug, one is found on the west side of the Village Laundry building at 134 Lockport St. And approaching the Main-Lockport intersection, just across the street looking slightly west, you will see yet another on the east side of the Anchor Spirits Liquor Store owned by proprietors Mark and Cheryl Butera at 113 Lockport St.

As reported in the July 31 issue of the Tribune/Sentinel, the laundry building mural has its focus on a historical approach of the village with its depiction of the waterfront and famous landmarks for which Youngstown is best known. Price, who was commissioned for the mural by the building’s owners, Cherie and Joe Serafin, decided the typography and look of the mural should resemble a treasure map. It was meant to convey what visitors and residents of this area often think of the Youngstown community, in that in this small corner of Western New York is a “treasure” that should be celebrated, she said.

“It has been awesome to see Ali bring to life something Cherie and I have been dreaming of for so long,” Joe commented of the finished work.

Next came the mural adorning the sidewall of Anchor Spirits that was completed this past week. Cheryl commented, “It’s our way of paying it forward after having almost 14 successful years here at 113 Lockport St. in Youngstown, NY. It’s the Anchor Spirits & Wines story as lived and told by owners Cheryl and Mark Butera. It’s our lived history and our story.”

Price, a Grand Island native, graduated in 2014 from Grand Island High School and went on to attend SUNY Purchase where she studied graphic design.

“I graduated with a BFA in graphic design and a minor in arts management,” she said. “After that I moved to Rye, New York, and started working for a design company in the city called Ink Design. I did that for two years, and then (the) pandemic came and I was working from home (on Grand Island).

Price said she first became interested in murals after completing a bathroom design project for a relative.

“It’s funny, because I never thought about doing murals, but when I think back, I did do a lot. I did like 10; I did hydrangeas in my uncle’s bathroom – like full walls.”

Price said she was active in various art projects while a GIHS student, including Chalkwalk competitions at the annual Lewiston Art Festival.

“In high school I did a lot of (projects) like Chalkwalk, Lewiston.”

On the Island, one major endeavor was working with mural artist Terry Klaaren, who completed a series or murals on the rear of buildings at the Grand Island Plaza facing Baseline Road in October 2012. The mural was celebrated with the Grand Island Fall Festival.

“A few kids from the high school were asked to help,” Price said of the GI Plaza mural. “So it’s like my (intro) into mural art. The scaling and working up on things that are five times the size (of that).” 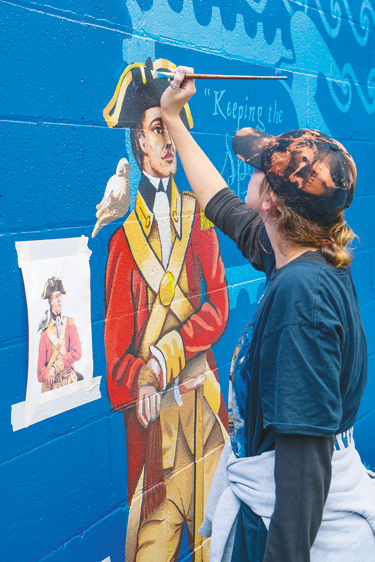 The artist with her creation. 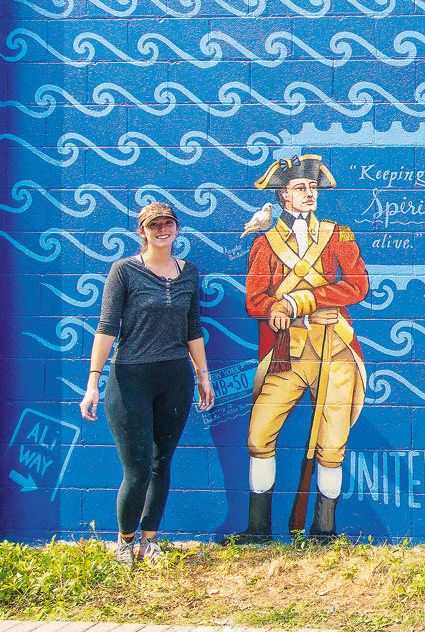 What led her to Youngstown?

“I love Youngstown,” she said. “(Of the mural project) I didn’t choose it; it kind of happened. It kind of naturally worked out that way, because my family friends own the Laundromat, so we have been talking about doing that mural for years. And then I had free time, and I was like, I really want to try it. So I was doing a lot of chalk (art) at the beginning of the pandemic, to get out of the house and be creative. And then I texted them; like I’m ready to do this mural.

And so it began. The completion of the Laundromat mural soon caught the eye of the Buteras, who saw the mural as the perfect way to convey their appreciation and heartfelt love of the village.

“When we saw the mural being created across the street, we stopped to talk to the artist Alessandra Price, aka Ali,” Mark said. “The second time we stopped we gave her Cheryl’s sketch of the basic idea. Waves representing the Niagara River as you face west with our anchor overlaid on the water, Canada and Fort George to the north and Old Fort Niagara on the USA side with sailboats and clouds. When we met with Ali at a later date, she was able to take our ideas and expand them into what today is a beautiful work of art.”

The Buteras note with pride they have always loved having their business in Youngstown within the Town of Porter. “We’re hugely grateful to our committed customers for making our business viable!” Mark said.

He said that Cheryl’s mother, Florence, was born and raised in Thorold, Ontario. She met and married Cheryl’s father, Bernard Irish, after he was discharged from the U.S. Navy. For some time Cheryl lived with her mom, dad, and younger sister Diane at the military barracks at Fort Niagara as babies. “That was the beginning of Cheryl’s affinity for Youngstown and Lake Ontario. Cheryl’s mom died March 28, 2020, and her dad died in 1987. Both Florence and Bernard are commemorated on the mural.”

Mark’s parents, Charlie and Millie Butera, were born and raised in Niagara Falls, New York. He said they had a “vanity plate” Mark inherited with their initials CMB-50. That license plate is also part of the mural.

Of the planning that went into Mark and Cheryl’s mural, Price commented, “It’s gotta be good. And I wanted to encompass the town and the spirit of the town. Kind of like my take on the town, and the owners of the building’s take on the town. And I think the community really reacted well, too.”

Commenting on Youngstown’s qualities, she said the village compares with Buffalo (with its many different neighborhoods): “We have this uniqueness. … I wanted to capture that.”

Of her first mural completed across Lockport Street in the village: “That’s the perspective of those people and how I feel that vibe and what I get from them – that’s their perspective of Youngstown,” she said.

Of Mark and Cheryl’s, “This is their perspective. They like the idea of showing the geography of Canada vs. the U.S., the water, the sailboats, and all these treasures. That’s their pride.

“We – Mark, Cheryl and I – we like that from far away. It looks beautiful and it’s interesting. There’s a lot to look at, and you get the gist of what you’re looking at. When you get close to it, there a lot of hidden things you discover. We have callouts to the (former) post office, the Navy, and family members of theirs. Each feature has a little story. The water, the dove, a license plate.”

Of putting this all together, she added, “I like (to think) everything has a purpose and there’s a concept, it all comes together.”

Mark and Cheryl note with pride the message that their mural brings to the Youngstown community.

“It’s keeping the memories and positive connection to the past and the present. Our hope is that long after we are gone the mural will stand the test of time and weather. It gives us great pride to showcase Youngstown in such vivid color! As we all work to get through these difficult times of COVID-19 pandemic with people hurting, so much anger and sadness, our message is meant to be one of Peace and Love. Believing better times will come,” they said.

For Ali Price, she said she intends to work and grow her presence in Buffalo Niagara. She noted with pride her own new business.

“It’s called Ali Way Creative Agency. And I do murals, lot of murals. I also do websites, logos, some website design. It depends on what the client wants. If they want me to design the website and have someone else code it; I will come up with the artistic concept.

Of her newest Lockport Street mural at Anchor Spirits, she closed, “This mural is a good thing for the community; they (Mark and Cheryl Butera) have brought a good thing to Youngstown.” 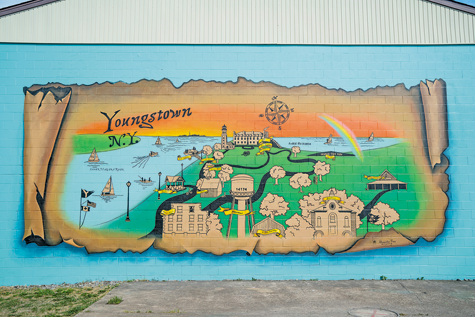