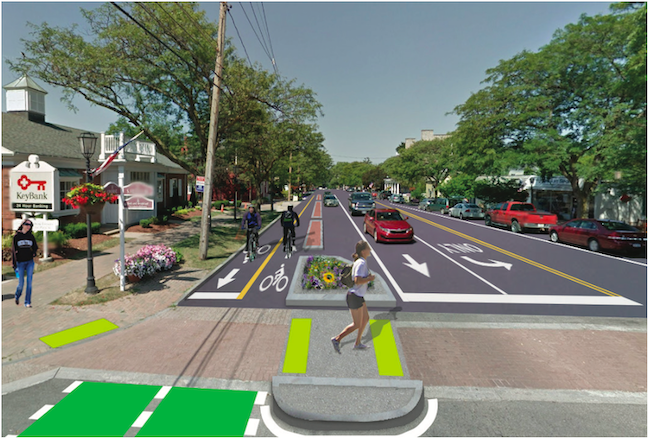 (Graphics by Alta, courtesy of the Niagara River Greenway Commission)

Amid speculation the New York State Department of Transportation will decide which, if any, bike paths are selected for Center Street in the next 60 days, Niagara River Greenway Commission Executive Director Greg Stevens again appeared in the Red Brick Municipal Building to pitch a southside bicycle track on Monday.

Speaking in between the Historic Preservation Commission and Planning Board meetings, Stevens said, “There's an opportunity right now for the village. This opportunity won't come around for another 30 years, to have some input on what the DOT does with Center Street (when it repaves next year).

“We have an expert team working on our trails. They know all about how to improve pedestrian safety and cycling safety and improve economic activity in a village.”

He explained, “A dedicated cycle track is an exciting concept, because it defines the state-of-the-art in village cycle safety. There are very few places outside of Portland and Seattle that have dedicated cycle tracks. The City of Buffalo just put a tremendous one in from City Hall all the way to Hertel on Niagara Street. It's going to be a fantastic example of upgraded safe pedestrian and cycle mobility.

“Our experts think there's room for one on Center Street.”

He presented the concept at the board meeting Sept. 8, but was met with skepticism from Center Street business owners. This time around, he included a few new facts. Namely:

•The $200 million multiuse trail is estimated to bring 8.5 million bike riders to Western New York each year – which is just 1 million less than the number of tourists visiting Niagara Falls annually.

“We have never connected them by recreational trail to the Village of Lewiston, but now we have a $65 million project to change the Robert Moses Parkway (Niagara Scenic Parkway) into a multiuse trail system along the top of the gorge,” Stevens said.

•“There's a new train that comes three times every weekend loaded with bicyclists and their bicycles from Toronto. It rides from Niagara Falls, Ontario – they want to come over. The Peace Bridge just built a new cycle lane. We're working with the Niagara Falls Bridge Commission to approve theirs. And, as you know, DOT has just completed a $2 million trail down the escarpment, which arrives at Seneca and Ninth.”

The conceptual cycle track would continue from this intersection to Academy Park at Ninth and Center, cross down Center Street, go down to the waterfront, then back up and around the Red Brick to either Mohawk Street or Lower River Road.

•The Empire State Trail, which goes from Manhattan to Montreal, is going to connect to North Tonawanda and the Village of Lewiston in spring 2021.

How it continues on to Youngstown is the question at hand.

“It's fine if you don't like the plan, but what we need to know, fairly quickly, is what you would want,” Stevens said. “We're going to try to design something. We've got an opportunity to do something that will last for 30 years – and there's a lot of room, in my biased opinion, to improve Center Street. The Village of Lewiston clearly deserves something better than Center Street. We believe this is going to be one of the most attractive locations on the entire Greenway network that we've spent $300 million developing. And we think this is a great opportunity for the village.

“If you don't want that, we can go down some other street, and we can put our Greenway gateway visitor center in Youngstown – they'd love to have it.

“So, we’re here to listen. We want to make sure that everybody has a chance to input. We have a website that’s collecting that information. We're happy to come back anytime and have more conversations.”

Planning Board Chairman Norm Machelor asked, “When does the community get to see this and comment on it?”

Stevens said, “The whole thing is coming out – the master plan for the whole area – is coming out on the 8th of October.” He explained the document is a “composite of what we feel is physically possible and what feedback we've heard from the communities.”

Machelor said, “Well, that’s the whole point. What feedback have you gotten?”

He added, “Here's the thing: Normally, Planning Board projects come to us for recommendations for the Village Board – that’s the normal procedure. And in doing that, we publish to the community that we’re going to have this meeting, and sometimes we have 100 people. So, when is the meaning with 100 people coming? Because we can't make this decision on our own. And the village trustees need to know what the hundred people have to say, too.”

Mayor Anne Welch said, “Just so you know, we've had discussions with business people along Center Street. I've been in chamber meetings, (Jazz Festival) meetings, and I have listened to their concerns and their input. We have looked at the language that is proposed in the bike lane that’s proposed. We feel that it can be revised. The one Jazz Festival meeting they had concerns about the meridian, that it would not work for their festival. That's something that can be revised, or not have that at all.

“So, there still is some work to be done on the whole plan itself, to make the lanes wider (than the concept calls for) and reduce the size of the bike lane itself, and take the meridian out.

“I talked to our DPW superintendent about snowplowing, and he said it would be hard with that meridian in there, where the flowers bump out. … There's still things that need to be discussed and revised, and we're working on that.”

Machelor said, “Well, I guess that's exactly what I wanted to hear.” 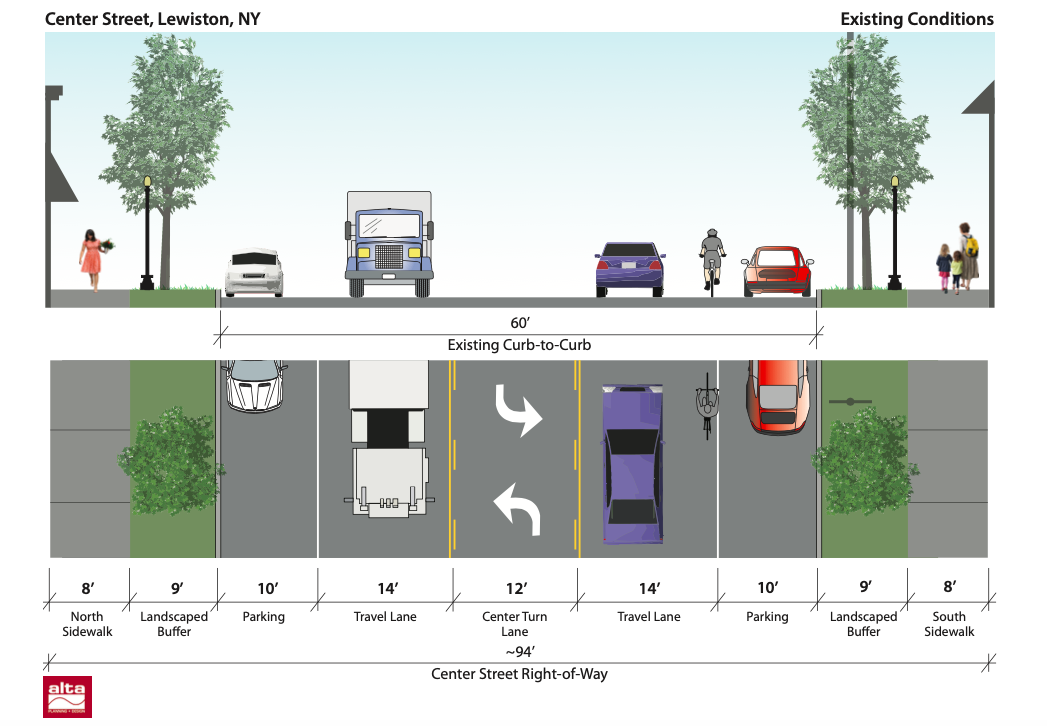 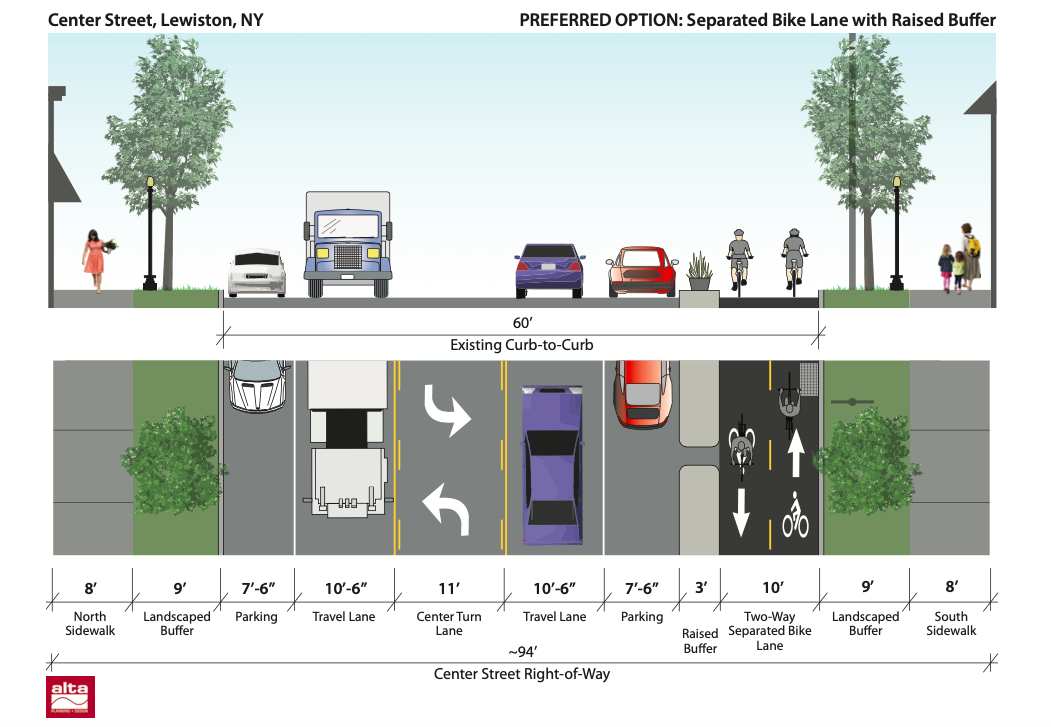 And what could be.

Welch said, “I do feel that a bike lane is necessary, because (Deputy Mayor) Vic (Eydt) and I walked up and down Center Street and talked to businesses, and their biggest complaint is the people – the kids using the bikes on the sidewalk, whizzing by the businesses. They're complaining somebody’s gonna get hurt. And I can't really say I want them to ride on Center Street, because that's not safe, either. So, this is the safest alternative we can think of. And I think, once it's revised, I think everybody would agree that it's a safer thing to do.”

“I agree,” Machelor said. “It’s for everybody in the Village of Lewiston.”

Eydt said, “I think we have to find out what the timeframe is for DOT and then work off of that.”

“As long as we don't forget that part where we actually have this public meeting, and everybody gets to have their say,” Machelor said.

Eydt reiterated the plan is conceptual and not set in stone.

Stevens said, “DOT will be finished with their conceptual design in 60 days, so if you want to have meaningful input in that process, it really should be in the next 30 days.”

Tom Deal of Deal Realty asked, “The (cycle track) plan has already been submitted to the DOT, correct? So, it does seem to me as a  … property owner and a business owner, that this plan is already being pushed forward without any input from the businesses. I can name off three, four businesses that are here – and then there was another three or four at the regular village meeting, and none of them are for this. Nobody wants a bike lane on Center Street.”

Welch replied, “That's not true. We talked with business people, and we have a lot of people that we talked to that were totally for it.”

Curt Stuart of Stuart Sports said, “I appreciate everybody’s input and the work that’s gone into it. But, as a resident, and as a business owner on Center Street … yes, it will slow down Center Street, but I think it will slow it down to a crawl.”

He added, “As nice as it would be for people from other towns to bike throughout the village, I don't think it's going to be good for the residents here at all. I think it's gonna jam up Center Street. It's gonna be slow. It’s going to take the traffic and put it in residential areas.

“I’d rather see the bike path go to a residential area.”

He said thousands of additional bicyclists on Center Street sounds problematic: “If you think safety is hard now – I think we're solving a problem we don't have. I don't think we have a bike problem on Center Street.”

Ron Craft, who lives and works out of a residence at North Fourth and Center streets, said he is an avid walker. He observes traffic patterns all year.

“After this COVID’s over, it's a different ballgame,” he said. “We've got to save our businesses. And the one thing we don't have – and you want bicycles to come here – we don’t have enough parking. So, if you want to change Center Street, give us diagonal parking.”

He noted, “We don't need to advertise Lewiston. I look out on Center Street before the COVID, you couldn’t get a parking space on a Friday, Saturday or Sunday night. People know we’re here.”

HPC board member Peter Coppins asked Stevens if other proposals exist, beyond the cycle track idea presented to the public via this publication.

Stevens said, “Yes. We actually went to DOT with three different varieties of what Center Street could look like. One is just put some paint on the road, and that's where the cycles are – between cars and parked cars – which is problematic in some ways.”

He noted, “The cycle track is the most secure; it's the highest level for a cycle-friendly village, and (for Center Street to be) a significant part of the regional cycling economy. So, that's one direction to go.

“Pointing it down some other street and having a bypass. You don't care about that (cycling economy), and you want an automotive main street with angled parking on it – that’s a completely different strategy. It's the kind of thing a planning board should be weighing those options. …

“We went to DOT with three options, all of which were improvements over their basic plan, which is just to repave Center Street.”

Stevens said DOT has the final say in which design is selected, because “It’s their money.”

DOT was tight-lipped on the project.

Region 5 Assistant to the Regional Director/Regional Public Information Officer Susan S. Surdej, P.E., would only confirm, “The New York State Department of Transportation is working with the Village of Lewiston and the Greenway Commission to explore the possibility of adding a bicycle path along Center Street as part of our upcoming resurfacing project, which is still in the preliminary design phase.”