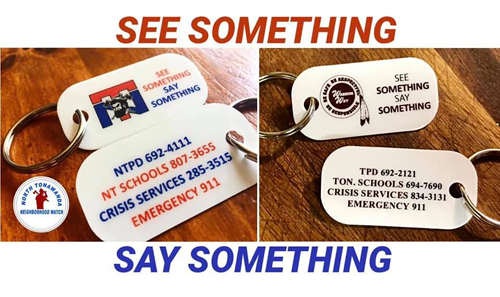 On Thursday, the NT Neighbourhood Watch tentatively resumed its monthly meetings with its first in-person gathering since the COVID-19 outbreak began. The group met under a pavilion at Pinewoods Park after the Common Council voted Tuesday to waive the pavilion fee.

According to the group’s chairman, Joseph Marranca Jr., the group had planned earlier this year to start meeting at the city’s public library but, unfortunately, the library community room remains closed.

For now, he’s not certain where the group will meet going forward. Although outside would be ideal, he says, with the weather changing, the group may go back to its original location at a local church.

"It’s been six months since we’ve been active. We’ve been trying to make up for things with the Imagination Station and social media. … But it's disappointing because this was going to be a really big year for us,” Marranca Jr. says.

Still, even without a regular meeting location in place, Marranca Jr., and his son, Joe Marranca III, encourage fellow residents to learn more about the group. Marranca Jr. admits that, before he first got involved with the group in 2017, he didn't know much about it.

“I didn’t even know that we had a watch, to be honest,” he says. “So that’s been one of the things I’ve been trying to do is really raise our profile in the community; let people know it exists and just do something positive for the city.”

The NT Neighbourhood Watch first formed in 2009. Initially called “Citizens on Patrol,” the group primarily operated out of the city's 2nd Ward. Shortly before Marranca got involved, the group went citywide and changed its name to help build connections with national Neighbourhood Watch affiliates.

Contrary to some opinions, the Neighbourhood Watch isn’t a collection of nosy neighbors or vigilantes. Marranca says one of the group’s main goals is simply to promote safety and crime prevention.

In conjunction with the NTPD, the group has worked to promote the “#9PMRoutine,” which is a social media campaign that simply reminds neighbors to make sure their homes and cars are locked at night to prevent thefts and break-ins.

The group also promotes the phrase, “See Something, Say Something” as a reminder for residents to keep vigilant. In 2018, a community member provided funding to help the group make more than 5,000 keychains featuring the slogan as well as contact numbers for local police and crisis management hotlines and pass them out to every student in the NT school district.

While it might at first seem like just a slogan, it wasn’t too long ago that the words became a literal rallying cry.

In early July, when a group of juveniles attacked a young girl on the high school athletic field, two members of the school’s wrestling program, Anthony Swan and Simon Griskonis, stepped in to help. When asked about their decision to act in televised interviews, the pair repeated the “See Something, Say Something” slogan. During several ensuing anti-bullying rallies, demonstrators chanted the phrase.

“You know, I don’t know if there was a direct connection or not, but I was so happy to actually hear that. It’s exactly what we were hoping for … and not only did those kids see something, and say something, they stepped up and did something,” Marranca says.

The group also does an incredible amount of charity and volunteer work in the community. There’s nary a food drive, trunk-or-treat, or slow roll that the watch hasn’t assisted with. But the Marrancas say that perhaps the group’s most vital community service is acting as a liaison between residents and local authority figures. From the police to elected officials, the Neighborhood Watch can provide a vital connection point for residents to engage in meaningful discourse with people who can affect change.

“Our meetings are really to help facilitate conversations and give people a more comfortable setting to discuss issues,” Marranca Jr. says. “That’s one of the reasons I'm so disappointed we haven't been able to meet; we usually have a police officer at our meetings, but we’ve had members of the Common Council. … You're able to talk with them on a more personal level and get maybe more information that you can't find anywhere.”

Marranca Jr. explains how a resident contacted the group regarding a corner step alongside a neighborhood intersection. He says the group helped work with the NT Department of Public Works and, shortly thereafter, the step was installed.

Marranca III, who was elected sergeant-at-arms in February, says the level of communication the watch provides was a big part of what made him want to be a member.

“Sometimes the police are seen as an authoritarian figure and might not be seen as very approachable. So, I think our group does a good job of helping to foster relations with law enforcement and the Common Council, while keeping it very candid and more personable. Unlike a council meeting or something, you have more of an opportunity to have a real, open discussion. I think that’s a really good thing for our city,” Marranca III says.

He also notes an example when not-for-profit health and human services agency People Inc. opened a facility in the area.

“There was some misinformation about it and a lot of citizens had concerns and questions,” Marranca III says. “We were very fortunate to have some of the representatives from People Inc. come speak with everyone, and you could tell by the end of the meeting people were really happy. They had all their questions answered.

“That's just a great example of how we're able to facilitate those conversations and it shows that communication is key.”

For Marranca Jr., that communication and sense of community is not just what makes the watch so important, but what makes North Tonawanda a special place to live.

“I've always had a great relationship with the city, but now I've gotten to really meet residents and talk to them, it's been rewarding,” Marranca Jr. says. “To have people say that they appreciate what we're doing and, even though we’re trying to keep crime and safety forefront, we try to do it in a way that’s positive. People appreciate that. …

“You know I’m involved with a lot of other clubs, but I’ll be honest this is my favorite because I can really highlight the positive aspects of North Tonawanda.”

For more information about the Neighbourhood Watch, email [email protected] or visit https://www.facebook.com/groups/northtonawandaneighborhoodwatch.