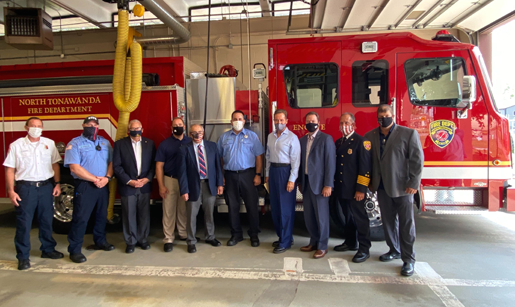 On Wednesday, Congressman Brian Higgins, North Tonawanda city officials and Fire Chief Joseph Sikora announced the North Tonawanda Fire Department was receiving a federal grant for $174,600 to replace its aging fire hoses and nozzles, as well as other critical equipment used in responding to mutual aid calls in neighboring districts.

“I’m proud of the work the city’s firefighters do and to be able to provide them with the most efficient and modern equipment possible is very exciting,” Sikora said.

He noted the need for new hoses has been an urgent one for some time as the department’s current hoses have been in use for more than 30 years. Two years ago, during annual safety inspections, leaks were discovered along the hose’s connections, severely impacting water pressure. Sikora said that without the new hoses, the department would not have passed its safety inspection this year.

When the announcement was made, the applause from fire department officials and employees was genuine, as the department’s previous attempts to apply for the grant had been denied.

The funding was awarded through the U.S. Department of Homeland Security’s Assistance to Firefighters Grant (AFG) program. AFG involves a competitive funding process wherein grants are evaluated by a panel of peers and awarded based on the substance of the request. Sikora later offered special praise to NT firefighter and grant writer Rob Orlowski for his efforts in drafting the AFG application.

When asked how important the federal funds were to the department, Sikora explained that they were paramount as local resources were simply not available, a fact North Tonawanda Mayor Arthur Pappas lamented during his time at the podium.

“Our department … (does) an excellent job in our community and the surrounding communities as well. But equipment gets old and worn out ... It needs replacement. And it’s very difficult when they come to the city … and we have to say, ‘Well, we know you need it, but the resources aren’t there,’ ” Pappas said. Elsewhere, he added, “We’re very proud and thankful that we have legislators that are helping their communities, especially during this particularly difficult time in this pandemic where all communities are having somewhat of a problem.”

In his own remarks, Higgins applauded the work the fire department has done, not only for the everyday community service they provide, but for standing resolutely to ensure they secured the grant.

“The job of a firefighter is never easy, but it becomes especially difficult without the right equipment,” Higgins said. “We commend the North Tonawanda Fire Department for their persistence and success in pursuing this highly competitive award. And we thank each member who has committed to responding to and protecting our neighbors and neighborhoods.”

When asked how the new equipment will benefit the fire department, Sikora said the updated equipment will allow firefighters to increase the amount of gallons pumped per minute, meaning more capacity per firefighter. According to a press release from Higgins office, the new hoses will also allow the department to allocate personnel and resources more efficiently.