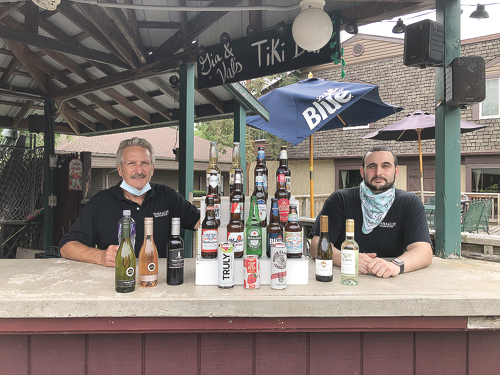 One of those items – Off-Track Betting – was derailed as the coronavirus pandemic took hold, forcing restaurants to close their doors in March. Races and events, moreover, were canceled as New York looked to stop the spread of COVID-19.

As the infection rate has lessened locally, and Tin Pan Alley is now open for indoor and outdoor patio dining, the Castigliones announced plans for a grand Kentucky Derby party on Saturday, Sept. 5.

“Now that we have OTB, we’re the only one in town that actually has it,” Castiglione II said.

He explained, “I’m going to be running a happy hour that day from 2 to 6. It will be buy one appetizer, get your second one half off. And I’m also going to be doing drink specials that day, too. Probably some Kentucky Derby drinks. Probably like a mint julep and then a couple other drink specials to pair up with it. And I’ll probably do some drinks and just shot specials; maybe a couple frozen drink specials, as well, for that day.”

Of course, the “Run for the Races” was postponed, making this the first time a Kentucky Derby is taking place in September.

Those looking to play OTB can get a voucher from a Tin Pan bartender, or one can go directly to the machine located next to the front door.

“And if they win, they get paid out here – they don’t have to go to (a standalone OTB). Up to $600,” Castiglione said. “It’s like playing the Lotto. … We’re the only ones in Lewiston that’ll get it, because it is regioned off. And a lot of people down here told us they’d rather not go up the hill, if they didn’t have to.”

Obviously, guests don’t have to place a wager in order to come in and enjoy a meal at Tin Pan.

The chef also is offering one low-carb meal a week.

“I know people are looking for that kind of stuff nowadays,” Castiglione II said. “So that starts actually next week – that starts on Monday. Every week they could look on our website, see what meal of the week it is, and there’ll be a low-carb. We’ll have all the ingredients listed – calories, carbs, all that stuff.

Though eateries are at limited capacity, Castiglione II said it has helped to have one of the largest outdoor dining spaces in Lewiston.

Operating during the pandemic, “With my patio as big as it is, it actually – surprisingly – hasn’t been (awful),” he noted. “I mean, it’s been hard, because just with the new regulations and everything; it’s hard when you get people that want to come in and just sit on the patio and have a drink. It’s hard, you know, to tell people they have to order food first. It’s a challenge; but we’ve accepted the challenge – and it’s actually been going really smooth, to be honest with you.

“It’s terrible that summer’s almost over, but with that being said, it was a good summer. I mean, I missed all the festivals in Lewiston. That was huge to lose out on that kind of stuff. But all in all, with all the regulations and everything, it still was a pretty good summer.”

“I think with the festivals and Artpark and everything, yeah, it brought in a whole different clientele. But, with that being said, on a Tuesday night – like if it was a concert night – we’re still almost a full patio full bar,” he said. “So, the locals are really coming out to support the local businesses, that’s for sure.”

His father added, “That’s a good thing. I think everybody in their own regions are feeling the same way – to support local businesses – and it’s very important at this point of the pandemic, because who knows where we’re going to go from here.”

Tin Pan Alley is located in the mini-plaza at 775 Cayuga St. 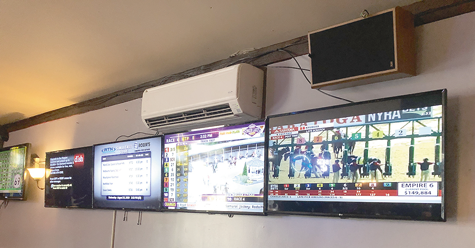 Pictured are the OTB screens inside Tin Pan Alley.