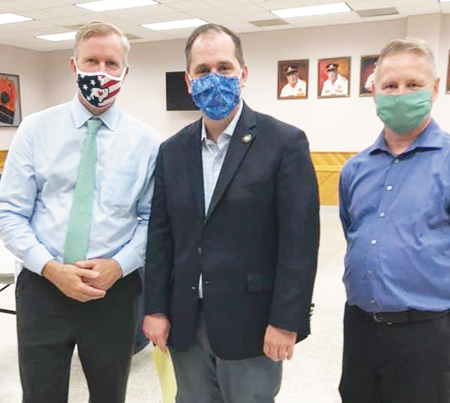 As summer 2020 moves into fall amid the COVID-19 pandemic, the northern Niagara County region continues its struggles with the residual impacts.

On Monday, Village of Wilson Mayor Arthur Lawson met with a number of federal, state and local officials in an attempt to shed some light on what has been a difficult year up on the northern Niagara shores. Attendees at the session held at the Wilson firehall included U.S. Rep. Chris Jacobs, Assemblyman Mike Norris, John Percy of Destination Niagara USA, representatives of the Niagara Falls Bridge Commission, representatives of the Army Corps of Engineers Buffalo District, and roughly 20 business interests representing the core of the Wilson-Olcott-Newfane areas.

While Lake Ontario water levels have settled down for the time being – allowing for much-needed infrastructure repairs along the shoreline to get underway – businesses continue to struggle. The ongoing effects of the coronavirus exacerbate this fight.

“We were sharing our experiences, information,” Lawson said of the group’s discussion with Jacobs, who recently assumed the 27th District seat in Congress following his special election victory in April. “He was genuinely interested; he heard much from area businesses.”

As noted, much of the area’s struggles continue to center on the loss in tourism and from the impact of shutdowns beyond its control – namely the U.S. bridge closures into Canada.

Just this week, Canadian Deputy Prime Minister Chrystia Freeland announced Canada and the U.S. have agreed to extend the temporary restrictions covering all nonessential travel across the entire border until Sept. 21.

Impacting travel on all U.S. border-crossings in Buffalo-Niagara, the measure continues to exempt the flow of trade and commerce, as well as temporary foreign workers and those in the health care industry who may reside on both sides of the border. But it has also had a pronounced negative impact on cross-border traffic and the region’s economy. Lawson noted the comments he heard from the Niagara Falls Bridge Commission visitors.

“They said traffic on the three Niagara Falls bridges was down 96% from May-June 2019 to the same period this year,” Lawson said. “There were 300,000 car crossings during that time last year and 12,000 for the same month this year. He (Jacobs) seemed concerned; many businesses spoke on the loss of Canadian travel.”

Lawson said many of the businesses do continue to struggle, not only from COVID-19, but also from the impact of the high water levels and damaged property. He said some of the area’s core reported business declines of up to 60% from May 2017, when high water levels began to be a problem, to this day.

“No one was prepared for that at all; we didn’t see that coming,” Lawson said.

Anne Bellone Basille, a Town of Wilson council member, director of Wilson Tourism NY and president of Mirage Tours, joined with many in calls to Jacobs for greater federal assistance to address the struggles.

“Our tourism industry needs help on a federal level, and the international border needs to allow nonessential travel soon in order for all of our community’s small business to survive … which actually goes for both sides of the border,” Basille said.

“Just as an FYI, the general feeling is that the border will be closed to nonessential travel until the first of the year,” she added.

Despite the lakeshore area’s struggles, Lawson did take note of some recent positives. He said grant funding from Gov. Andrew Cuomo’s Lake Ontario Resiliency and Economic Development Initiative is now beginning to move and that lakeshore projects are either starting to get underway or expected to begin in coming months. Lawson also noted discussions continue with the state with regard to addressing the 5% REDI funding share placed on localities.

Slowly but surely, he said he feels the area is beginning to recover. Lawson noted four successful business startups occurred in the lakeshore area over the past six months despite the COVID-19 pandemic, and that business at area Airbnbs has been good over the summer.

“We’re hopeful for the future. These small businesses are our whole lives,” he said.

Norris said, “We spoke to many local small business owners about the struggles they face right now due to COVID-19 along with Lake Ontario water infrastructure. Thank you, Mayor Arthur Lawson, for making this forum a success while following state and local guidelines.” 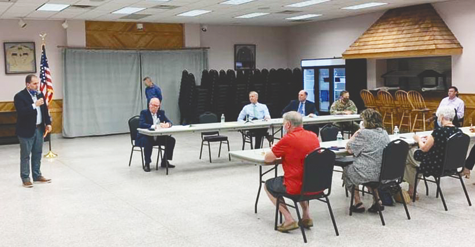 Norris speaks to visitors at the Village of Wilson meeting. (Submitted photo)