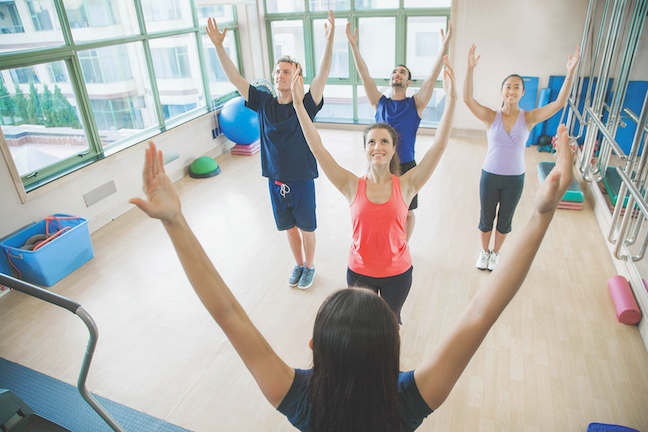 “Gyms, the guidance goes out today on gyms. Basically, the outline is 33% capacity,” he said. “There are health requirements that are in the guidelines that have to be maintained to their ventilation requirements. This is a whole new topic, where we can actually do a lot of good work; we are in New York, with the HVAC systems and the filtration.”

He added, “One of the requirements is mandating masks at all times. Gyms can open as soon as Aug. 24. But the locality must open them by Sept. 2. The localities have a role here: They have to inspect the gyms before they open, or within two weeks of their opening, to make sure they're meeting all the requirements. So, that variation is to give localities time, if the localities need it. So, if the localities can get the inspections done or be ready to inspect, then they can open up Aug. 24. If a locality can't get ready to do inspections, then they get another week; they can do it Sept. 2.

“Localities can also determine whether or not the gym has classes inside it. Some gyms have classes. Localities can decide whether or not those classes can be undertaken. The local elected will make the decision in a jurisdiction, and the local health departments must inspect before or within two weeks to make sure all the guidelines are in place.”

“In gyms, we're requiring masks at all time. Whereas in indoor dining, by definition, the patrons aren't wearing masks – you're sitting at a table; you’re without a mask,” she said. “And one of the major issues that we found when the governor stepped in with the SLA becoming much more aggressive is that people were drinking, they were standing, they were commingling – people were letting their guard down. And so, this is a different situation. But we are mandating masks at all time.

“There has to be a sign-in form so that you know exactly who's coming into the gym at all times, in case – God forbid – there's a positive, you can easily contact trace back. We're recommending that they do screening at the door, so that's going to be something that's in the regulation. So, that could be temperature checks.

“And then we're also requiring, as the governor said, the MERV-13 filter, which has been found to be highly effective.

“So, we think all those things, in combination with the 33%, is something that we feel comfortable with. And if, for any reason, that ends up being a problem, then we will roll back.”

Some fitness facilities and independent contractors were offering outdoor workout sessions as they waited permission to reopen for in-person sessions. 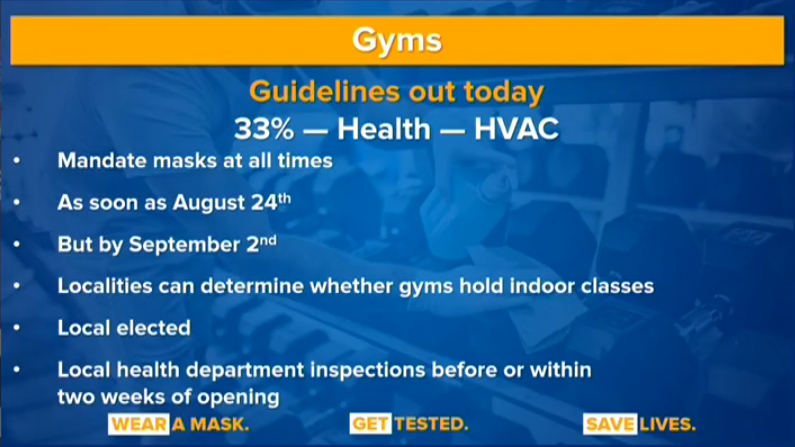 Image courtesy of the Office of Gov. Andrew M. Cuomo

Cuomo said, “The gyms are going to say these are difficult guidelines – and they are. The mandatory masks, you know, the mask is so effective – and it's such a sin that this nation still has not mandated masks. But a lot of gyms, and a lot of people, are gonna say, ‘I don't want to be on a treadmill with a mask,’ you know, but that's a very effective piece.

“To Melissa's point, you have to sign in and sign out. So, if there is a spread, you have a full list – the contact tracing is basically done for you already. You go right to the list: Who was there that day, what time were they there, etc. So, these are very tight guidelines.”

He noted, “Gyms are one of the areas where you have to be very careful. And we know that. So, research what has happened in gyms all across the country; research what the best protocol is according to the health officials; and implement the best guidelines – which is exactly what we've done. And health officials and (physical) space officials … have helped us come up with these guidelines. They came up with the 33%; the ventilation specifications; the cleanliness, how often the equipment has to be cleaned, etc. If it’s not done right, it can be a problem.”

He stressed local municipalities “have to inspect the gyms; because how do you know the gyms are following the guidelines? You don't know. And we just went through this with bars and restaurants – by the way.

“That's my trepidation – you want to know my honest trepidation – you come up with guidelines, you say to the localities, ‘You have to do the compliance.’ That's their primary function in all of this. That was our initial separation responsibility.

“And if they're not following the order, you hand them a piece of paper that says, ‘You're closed, because you violated Gov. Cuomo’s regulation. You have a problem, call Gov. Cuomo.’ Compliance is what I'm concerned about – and that's up to them.”

Per the governor's office:

In a press release Monday afternoon, Cuomo’s camp stated, “Outside of New York City, the county's chief executive – county executive, administrator, manager, or chair of the local elected legislative body – will determine whether gym reopening needs to be postponed.

“Localities can also determine whether gyms postpone resumption of indoor classes. In New York City, the mayor and, throughout the rest of the state, the county's chief executive may decide to opt-out of indoor group fitness and aquatic classes within their jurisdiction, postponing their resumption until a later date. Local health departments must inspect gyms prior to reopening, or within two weeks of reopening, to ensure strict adherence to Department of Health guidance.”

What About Movie Theaters?

A reporter asked Cuomo about providing guidance for industries that remain closed, most notably movie theaters.

The governor said reopenings have been based on level of risk, wherein essential businesses with low risk were the first to get the go-ahead, with other industries following, down to least essential and most at-risk fields.