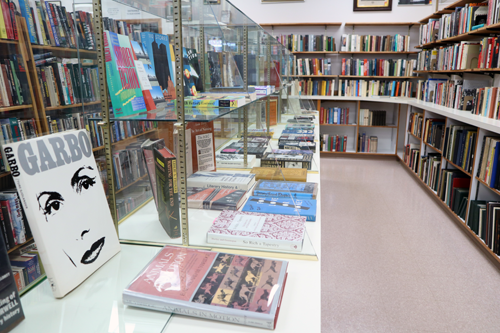 A look inside Old Editions.

Old Editions bookstore reopens (and a world of treasures awaits)

Old Editions Book Shop & Gallery, one of Western New York’s largest and most renowned bookstores, is ready to begin a fresh, new chapter in its storied history. Last week, the store reopened its doors for the first time since closing in April due to the pandemic.

In celebration, the store will feature recurring outdoor book sales in its parking lot (weather permitting) on various days throughout the remaining summer season.

Founded in the late 1970s by owner Ron Cozzi, Old Editions was a beloved staple in the Buffalo community for nearly 40 years. Eventually deciding it was time to move to a more manageable one-story location with better parking for customers, in 2018, Old Editions found its new home at the old Platter’s Chocolates building at 954 Oliver St., North Tonawanda.

For customers entering Old Editions for the first time, the tagline on its website, “No ordinary bookstore,” will quickly reveal itself to be wholly accurate. Even before the comforting bookstore smell (that familiar, vanilla-like aroma of aged paper, which thankfully penetrates even the thickest cloth safety mask) can settle in the nostrils, it becomes apparent that the unassuming storefront outside is home to a true world of wonders inside.

The store itself unfurls like a captivating book, with a simple, but engaging beginning. The front area is positively stuffed with secondhand books; each available in remarkably well-kept condition (and at fair prices to boot). From paperbacks to comic books, old classics and soon-to-be favorites, casual readers and bibliophiles alike will likely find everything they need – and more – right here.

However, as the first room gives way to the second, the first glimpse of Old Edition’s truly unique treasures comes into view. Like any good story, the store compels readers to venture further.

As one of the largest antiquarian bookstores in the U.S., the store is positively filled to the brim with offerings one will find nowhere else. With a jaw-dropping collection of collectible books, fine artwork, historical documents, autographs, collectible magazines, postcards and other memorabilia spread throughout Old Edition’s 12,000-square-foot frame, there’s guaranteed to be something to pique anyone’s interest.

Walking through the showroom, as it’s called, is truly a remarkable experience. Beyond the rows and rows of first edition printings for nearly every subject imaginable, the walls, the shelves, the tables; everywhere is simply alive with history, local and world. One could easily spend a week inside and barely scratch the surface of what the store has to offer. It’s like shopping in a museum and Cozzi is the curator.

He effortlessly recalls details about some of the showroom’s endless offerings: turn-of-the-century-paintings, early American maps, a painting of the Buffalo Yacht Club by Dr. Roger Lalli, and a President McKinley banner from shortly before he was assassinated in Buffalo.

Just past the collections of vintage train magazines and sought-after World War II service edition books, he casually reaches into a bin, which is simply sitting on a table, and produces a small, pristine map of India dating back to the 1700s.

Elsewhere, beyond the selection of vintage collectible sci-fi paperbacks (each individually wrapped in plastic and in mint condition), Cozzi thumbs through a rack of collectible prints and movie posters.

“If you’re into this stuff, you love it,” he says, smiling.

Yet, for all of the amazing antiquities and artifacts found in the showroom, the store saves perhaps its most remarkable finds for last. The rare book room, located near the store’s rear, is simply astonishing. Tomes of history – some centuries old – meticulously organized, wall to wall. There’s an Indiana Jones-esque feeling of discovery in here.

Matt Alexander, who helps manage the store, produces a pair of immaculately kept antique Bibles, something that Cozzi specializes in. The first, a so-called “Gun Wad” Bible, from 1776, was the first version of the Bible to ever be printed in American typeface. During the American Revolution, when the British were occupying Philadelphia, British soldiers stormed the printing house and began tearing apart the Bibles and using the pages for their gunpowder (hence the name.) As such, very few copies survive today.

The other; a French bible from 1552, illustrated by Hans Holbein, whose wood block printing techniques, Alexander says, helped define and reshape book illustrations forever. Because the wood blocks were carved by Holbein himself, the book’s elegant illustrations are considered by collectors to be as valuable as an original piece of art.

Beyond the antique Disney books, and autographed Henry Longfellow engravings, Cozzi produces an 1878 oversized edition of “The Rhyme of the Ancient Mariner,” illustrated by Gustav Dore, whose haunting and otherworldly illustrations appear as fresh on the page now as they did 142 years ago.

It’s here Cozzi demonstrates that the vastness of his and his employees’ knowledge extends not only for the objects in his store, but for the collectors who shop there.

“Somebody will come in and say, ‘I collect so-and-so artist,’ or ‘I’m a fan of this author.’ Somebody might be a fan of who did the covers; there’s lots of reasons why a person will buy a book. We help them find what they’re looking for,” he says.

Yet, even a collection as vast and remarkable as the one found at Old Editions is never truly complete and Cozzi is looking to the public for more.

“We can’t (decide) what we want to sell, we depend on the public,” he says. “We can only show what the public sells us. ...I can’t pick up the phone, ‘Hello, send me some more first editions of “Alice in Wonderland,” we’re dependent on the public and we want to get the word out to the public we want to buy their books.”

Looking around the store, one can’t help but wonder: How have these relics of the past survived this long? And how did they all wind up here on Oliver Street?

“Every time I stand in this room, you look at any number of these books – some of which are from the 1500s and 1600s – you think about all the different time periods of history that they had been through,” Alexander says. “How they got from Western Europe to over here; just all the things that these books have seen.

“It’s very humbling because, when you’re in this business, sometimes in a lot of these old books we’ll see stickers from bookstores and booksellers from like the early 1800s and you really just get that sense that you’re a custodian for these things. You’re gonna have your time with them for the next 20 or 30 years and, if you take care of them, well, they’re gonna get passed along and they’re gonna have this huge history that’s gonna go well beyond you. … It’s really an amazing experience.”

As for Cozzi himself, he says it all started sort of by accident.

A chess champion in his youth, Cozzi began collecting rare and antique chess books. He began putting ads in the local paper, eventually receiving invites into people’s homes. Inevitably, he says, when he would arrive, people tried to sell him their other old books. He eventually decided to begin selling his finds at the local flea market. Initially, he loaded and unloaded them back into his car after each week until, one afternoon, the owner finally offered him a permanent space.

However, the book trade was only going to be temporary. Despite many calls to open his own store, Cozzi instead took a part-time job at the postal service, which he had developed an affinity for while his grandfather worked there. He hoped to eventually work his way up to an accountant position, but needed an MBA. He wanted to attend night school at the University at Buffalo but would need to provide proof that he held a full-time work position – something which was usually granted to part-timers after 90 days. However, on Cozzi’s 89th day on the job, he was told he wouldn’t be getting a full-time position.

Although he ended up sticking around the postal service for another five years in hopes of making it full-time, around 1976 he fell back into bookselling. After a couple of years renting a small studio space and storage garages to store his books, he eventually founded his own store in 1978 on Allen Street.

The store moved throughout the Queen City numerous times throughout the years, with sites located on Hertel Avenue, Allentown, Main Street and Highgate Avenue, University Heights and finally Huron and Oak streets from 2002 to 2017.

After finally relocating to North Tonawanda in 2018, Cozzi thought that as a business owner, he had seen it all. But just as the new store was beginning to find its stride, the pandemic hit and Old Editions storefront was forced to close. To make matters worse, many of the trade shows that they had relied on were shut down as well.

Like many brick and mortar stores, Cozzi says Old Editions basically went into “survival mode,” simply trying to keep the bills paid every month. But beyond the decline in sales, Cozzi says what he has missed most was interacting with the general public.

“It’s unfortunate. We love meeting people; we love talking to people. People will come in and we’ll have a conversation for over an hour. … So we want to let people know we’re open and to have more communication with the public.”

Fortunately, the shop was able to at least keep afloat through its online business, which Cozzi says Alexander manned throughout the shutdown, often on a volunteer basis. Alexander says his dedication during this period was less about keeping his own job, and more about keeping a tradition alive in Western New York.

“We’re the last rare bookstore in Western New York as of this point.” Alexander says. “There’s a couple (area) bookstores that dabble in a little bit, but they don’t really have the specialty that we do. … We keep the hobby going.”

While he’s certainly thankful for everything the internet has done to support the business, Alexander says that the experience of venturing through a store like Old Editions is something online shopping will never be able to compete with.

“So much about collecting is just kind of learning about these things that you didn’t know about and suddenly just becoming fascinated with them. When you’re searching online, you’re searching for something specific. At a place like this, you’re letting things find you. Especially with an inventory the size of Ron’s, you’re going to discover a ton of things that you never knew existed,” Alexander said.

“So the brick and mortar stores, that’s one of the real functions that I think we provide to the book world is we keep the hobby going in a way that online sales can’t really replicate.”

As Cozzi makes his way back to the front of the store, he speaks about his collection of relics with a slight bit of bashfulness.

“I do want to say again that we have many affordable paperbacks as well,” Cozzi says adding that the outdoor summer sales will be stocked, not just with the front room stock, but also with their massive overflow inventory they can’t currently put on the floor. “I just don’t want people to be intimidated.”

There are few places that can rightfully advertise they have something for everyone, but Old Editions is truly one of those places.