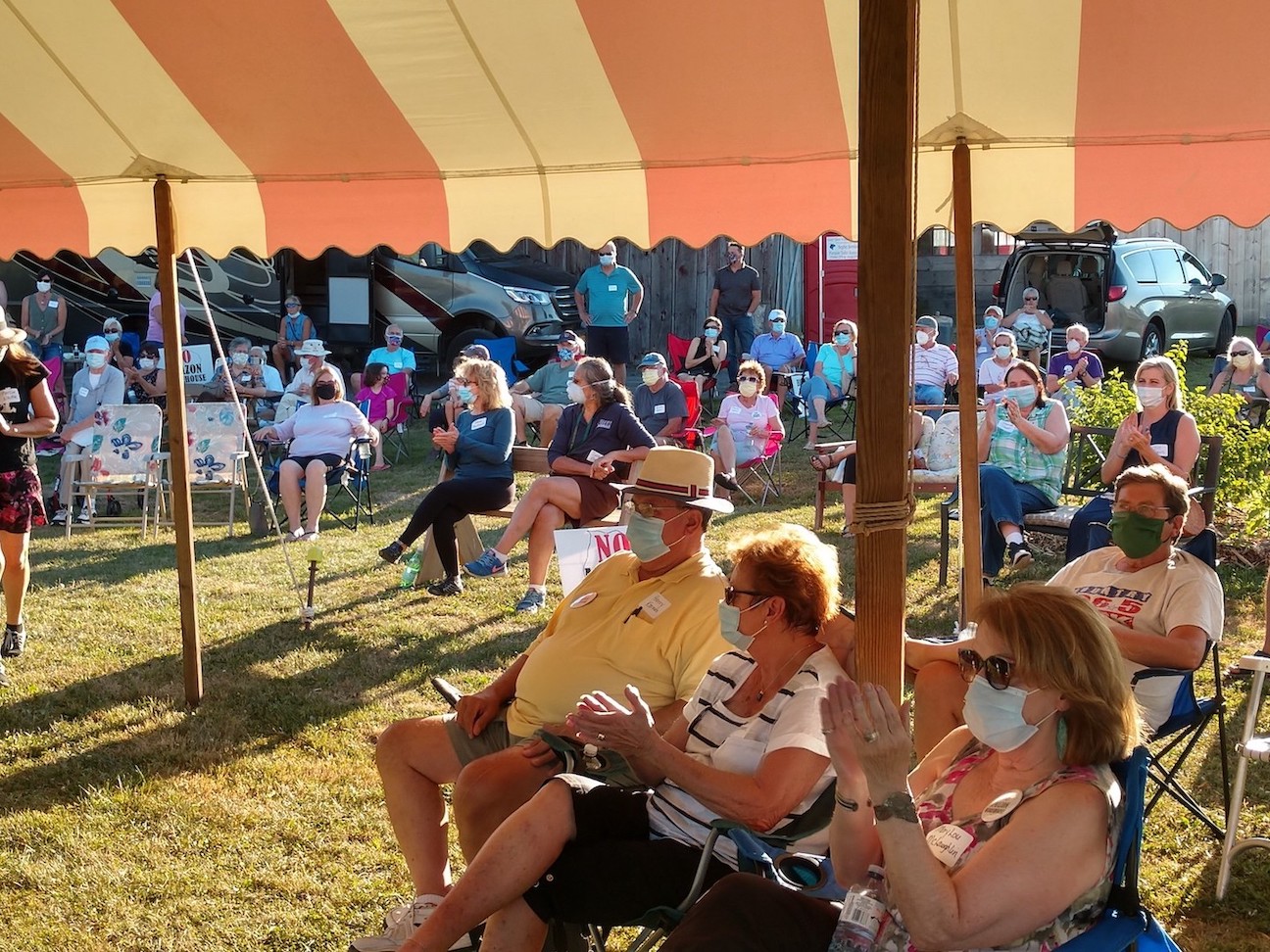 Pictured is part of the crowd of people who attended the rally to speak against Project Olive.

Attorney Jim Duggan, a volunteer for The Coalition for Responsible Economic Development for Grand Island (CRED4GI), told nearly 100 supporters at a rally Friday evening, “We are dealing with a David vs. Goliath situation here and Amazon is proposing a monstrosity of a project for Grand Island.”

“For our effort to be successful, citizen activity must continue and citizens of this town must make their voices heard again and again to town officials that they oppose this project and why,” he explained during the 90-minute informational gathering at the Alt Farm on Whitehaven Road.

Nicole Gerber, a sixth-generation member of the Alt family, began the session by going over the social distancing ground rules and made sure everyone was wearing a mask. At the registration table, there were masks and hand sanitizers along with information about why residents should sign their petition. There were also lawn signs and buttons advocating “No Amazon Warehouse” over a silhouette of the Island.

Cathy Rayhill, a spokesperson for CRED4GI, updated the audience on all that has been done in one month. Using a PowerPoint presentation, she walked attendees through an impressive and informative website (www.cred4gi.org), and had the leaders of five position papers on the issues they have with the project speak of the next steps. Those begin with this evening’s Town Board Meeting and workshop at 6 p.m.

Rayhill encouraged all of the anti-Amazon supporters to meet at Town Hall with their lawn signs and voices at 5 p.m. to meet the town supervisor and board members as they enter the building. She then encouraged rally members to go home and join the workshop meeting at 6 on YouTube and, rather than have their face on the screen, put their sign up.

“We must let them know we are not the vocal minority. We need to let our voices be heard by attending these meetings, the public hearing on this project and by continuing to send letters to the elected officials,” stated Rayhill, who said they hope to present the town with 2,000 signed petitions against the project, representing 10% of Island residents.

As of Monday morning, they had 1,300 signatures.

Dave Reilly, Gerber’s husband, who lives on the 150-year-old farm, spoke about the serenity of the area that attracts birds, animals and wildlife. He called Grand Island “the most beautiful place on Earth – a magical place that we want to preserve for future generations to enjoy.”

After receiving a thunderous applause, he spoke about the recent $10 million incentive TC Buffalo proposed to the Town of Grand Island that would be deposited in a trust fund for specific community projects if the $300 million, 3.5-million-square-foot distribution center is approved for the approximately 145.4 acres of land at 2780 Long Road.

A loud “No” echoed through the yard.

Rayhill outlined what the group has accomplished since it began on July 1, “to ensure everyone on Grand Island had a voice about this project.”

1,300 valid petitions delivered to Town Hall, with that goal of 2,000 by this evening’s Town Board meeting.

The endorsement of four local organizations.

500 lawn signs up throughout the Island with another 250 arriving this week.

Over 300 signed letters of opposition of the project have been delivered and supporters are encouraged to visit the “Take Action” tab at www.cred4gi.org. There are links to send email messages to the town supervisor and board members, as well as Erie County Executive Mark Poloncarz and U.S. Congressman Brian Higgins. 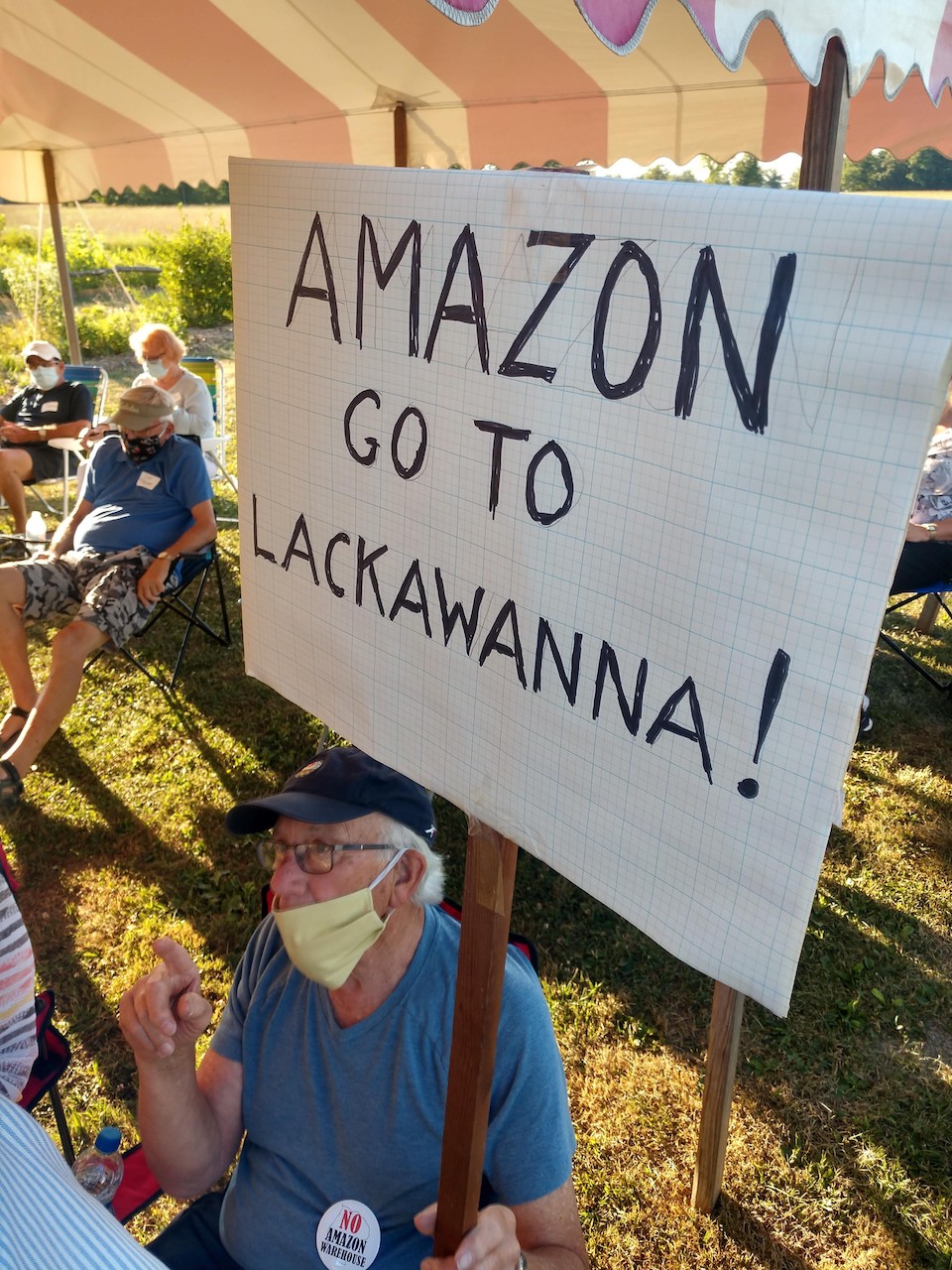 Rayhill explained how the website, created by her son Michael, is “a one-stop shop” for all Island residents to learn about this project and current or past Amazon projects throughout the country. Under the education tab, there are numerous links to stories under several tabs. It opens with links to the TC Buffalo’s proposal of several thousand pages to the town and the subsequent documents related to the project. The organization had volunteer members go through each of those documents and cross reference them with information they found from other cities with similar Amazon distribution warehouses, and write position papers on each subject (also posted on the site).

An interesting link under “Education” is “Too Big to Govern,” a 90-page public balance sheet for the world’s largest store from last November and underwritten by the Los Angeles County Federation of Law. There are 21 Amazon distribution warehouses in a four-county region of L.A., which purchased an estimated 7.2 billion in goods from Amazon, whose worth is said to be $1 trillion. The report said Amazon hauled an estimated 15.5 billion-ton-miles of truck cargo in the region in 2018.

The website says CRED4GI currently has partnerships with four local organizations, but Rayhill said they are close to announcing an alliance with two national-based organizations.

One of the more interesting position paper presentations made Friday evening was delivered by Sean Christian “Bubba” Rustowicz, a 2020 Grand Island High School graduate who was one of three seniors to receive a Rotary Club of Grand Island scholarship. He plans to study Environmental Engineering at the University at Buffalo this fall.

“My goal in life is to help preserve what I consider to be one of the most valuable assets that humanity has, in nature, for future generations to appreciate,” he explained. “Other than the bridges, the first thing people say about Grand Island is its natural beauty, hometown feel, the flowing Niagara River, the trees blowing in the wind, the birds chirping and all of it coming together to form some of the most beautiful sights in Western New York.”

He then explained eloquently how “all of this is at risk with the development of a 3.8 million-square-foot warehouse.”

He added, “That would be bad for our environment and it will have significant adverse effects on our fragile surroundings.”

“Let’s protect Grand Island’s fragile environment and just say ‘No’ to Amazon,” he said in conclusion to his 15-minute presentation.

Katherine Hastings spoke about traffic and transportation and included an update on the condition of the bridges and the strain the additional truck traffic will put on the bridges. She also talked about the additional strain this would put on the town’s volunteer fire department and paramedics.

She was in full support of Grand Island Highway Superintendent Richard Crawford’s announcement at the July 20 Town Board meeting that he was calling for a “full summit for a regional look at transportation and bridge traffic around this project.”

During the questions from the audience, someone asked why this could not be put to a public referendum. Rayhill said the town attorneys said, “this project does not qualify as one for a referendum.”

Stay tuned. This David vs. Goliath battle is far from over.

Project Olive is a development of approximately 145.4 acres of land located at 2780 Long Road for use as an Amazon e-commerce storage and distribution facility for consumer products.

On Monday, Martin Group Marketing sent out these background, fact sheet and supporting quotes documents on behalf of the project partners (PDFs):