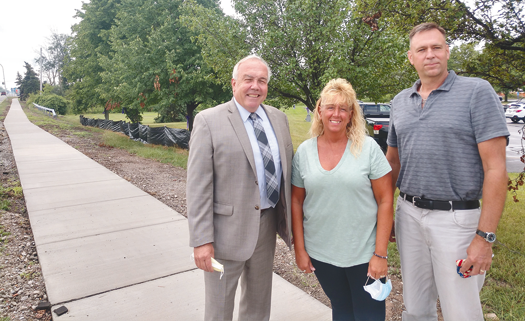 Fahim Mojawalla, whose family-owned Island Ship Center has operated at 1879 Whitehaven Road since 2008, ran outside recently with his team carrying “bottles of the coldest water on the Island” for the crews installing the sidewalk outside his store.

“We have a refrigerator filled with the coldest water on the Island that we use for every delivery driver who comes to the Island Ship Center. When we saw these sidewalks and the driveway pad becoming a reality, we made sure all the workers were properly hydrated, compliments of us,” Mojawalla said while inspecting the new sidewalks. “We are so excited about this project, because our town is now resembling the main streets in Williamsville and Clarence. This sidewalk project now allows residents to walk along Grand Island Boulevard rather than have to navigate traffic by being in the road. This is a great project for Grand Island.” 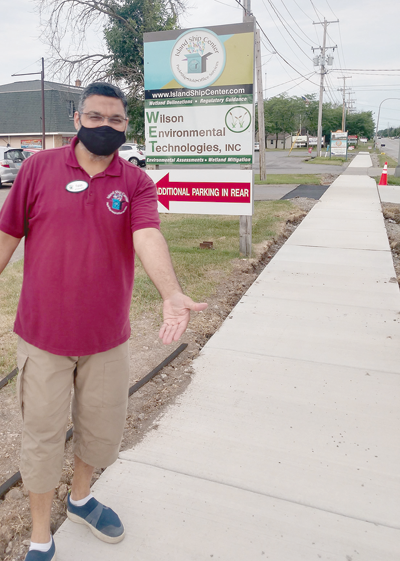 “We have never had the ability to walk directly from Town Hall to Tops before,” he said. “This is also handicap-accessible and, generally, it is a pedestrian improvement for all involved.”

In 2016, Grand Island was awarded a $1.5 million TAP-CMAQ grant from the New York State Department of Transportation for the design and installation of sidewalks on both sides of Grand Island Boulevard from Webb Road to Fantasy Island and the north side of Whitehaven Road to the Knights of Columbus building. The town’s share of the grant is $300,000 and the project, which began this spring, is scheduled to be completed by mid- to late-August with final restoration completed by mid-September, according to Lynn Dingey, the town’s assistant civil engineer.

C&S Engineering of Buffalo began design work in September 2017 and construction was awarded last October to Nova Site Co. of West Seneca. It hired E.J. Millitello Concrete of Clarence as a subcontractor.

The project includes drainage improvements and approximately 13,000 lineal feet of 5-foot-wide capped access on Grand Island Boulevard and the portion of Whitehaven Road.

Nova Site was allowed to work during the “New York State on PAUSE” order because the project is being funded by TAP-CMAQ and those projects were deemed essential.

“We appreciate how patient the public and business owners have been and we ask them to give us just a little longer,” Dingey said.

Town Engineer Robert H. Westfall said residents should be impressed by the changes, which will beautify the entire area. He said some of the key improvements will be closing the ditches that are on both sides of the street, ensuring more safety for bikers and walkers.

Dingey added the Baseline Road sidewalk project would begin next summer. The $350,000 NYSDOT grant, which was approved in 2018, will cost the town $70,000. That project requires 3,800 lineal feet of new 5-feet-wide sidewalk on the east side of Baseline from Webb to Grand Island Boulevard.