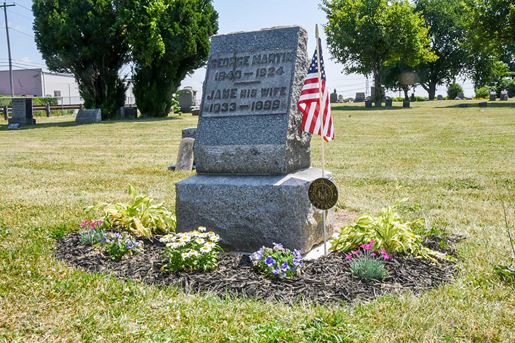 The project began last year, when Ames began working to document all of the veterans buried at the Witmer Cemetery, the only burying ground within the town. Armed with a list provided to him by former historian and friend Dorothy Rolling, Ames began at the front of the cemetery, where he noted a large marker that had fallen over. The stone listed George Martin, born 1840, and his wife, Jane.

Ames set out to find whatever information he could on the couple. He discovered that, between 1863-65, George had been a member of the 3rd United States Colored Infantry Regiment, which served in the Union Army during the Civil War. According to Ames, the 3rd was one of the first black regiments that trained at Camp William Penn, the first training ground dedicated to African American troops during the war.

After the war, Martin headed north to the Town of Niagara, where Ames found he and Jane in the 1875 New York state census. The couple was said to have been living on Niagara Falls Boulevard, west of Tuscarora Road, where George worked as a potato farmer for the Binkley family.

After his wife died in 1899, George remained in the town until about 1919. Around this time, Ames found Martin in a New York state veterans home before finding the record of his death in Pontiac, Michigan, in 1924. Ames speculates the Binkley family may have purchased the head stone and had arrangements made to have Martin brought to Witmer Cemetery to be buried alongside his wife.

After learning of Pvt. Martin’s story, Ames knew something needed to be done.

Throughout his life, Ames has committed himself to ensuring forgotten veterans throughout the area cemeteries get the honor and recognition they deserve. Over the past 10 years, he’s worked on a project in Oakwood Cemetery documenting the veterans buried there to ensure they could be properly honored on Memorial Day. He eventually recorded over 800 veterans in the cemetery, 18 of which had no stone at all. Ames ordered government military markers for these forgotten heroes, along with more than 100 military medallions for servicemen who received private, nonmilitary burials.

“To me, having never served in the military, I was very close to being drafted in Vietnam, but fortunately my number didn’t come up. This is my way of giving back is to make sure that we note the veterans in our cemeteries,” Ames says. “These guys deserve our honoring them in some way, shape or form. So that’s my way of doing it. Making sure the graves are marked and the flags go up at least twice a year.”

To fix the downed stone, Ames enlisted the help of the Town of Niagara Lions Club. In December, the group sprang into action and announced it was working to raise $965 for repairs. In the end, those efforts helped raise over $3,000, which was used to repair not only Martin’s grave stone, but for other renovations and repairs in Witmer Cemetery, as well. The club says it’s the least members can do for a person of Martin’s caliber.

“He fought in the Civil War and then he moved here and worked on a farm. The guy was a hardworking man, you know what I mean?” says Lions club member the Hon. John Teixeira. “He fought for his country and he fought for his ideals. … He was a gentleman and is a role model for a lot of people.”

Both Ames and Teixeira praise the local businesses and organizations that helped realize the project. Niagara Monument volunteered time and manpower to remount the marker on its new base, while Chuck Franz and crew planted flowers and ground cover at the stone.

Additionally, Strenkoski Brothers Concrete repaired the stone pillars that support the cemetery gates, which Ames says are almost 150 years old. He says their work was particularly challenging as it required matching the existing mortar, and utilizing techniques and tools that hardly even exist anymore.

Despite the effort put in so far, Teixeira says the Lions Club’s work isn’t done yet. The group plans to continue its beautification efforts of the cemetery, as well as install new fencing along its borders. The group also plans to sponsor a banner for Pvt. Martin as part of the Hometown Heroes Program so that he can continue to be remembered and honored. The program honors veterans of the U.S. military by displaying their picture on a banner, along with their name, rank, branch of service and dates served. For Martin, the 3rd regiment battle flag will be used in lieu of a picture.

Those looking to take part in the Hometown Heroes Program and honor a veteran who has lived in the Town of Niagara at some point in their lives are asked to reach out to Tom Tierney at 716-297-9109. The cost of the banner, hardware, shipping, etc. is $150. Any person, family or organization can sponsor a banner. The banners are kept and will be re-hung every year from Memorial Day to Labor Day throughout the Town of Niagara.