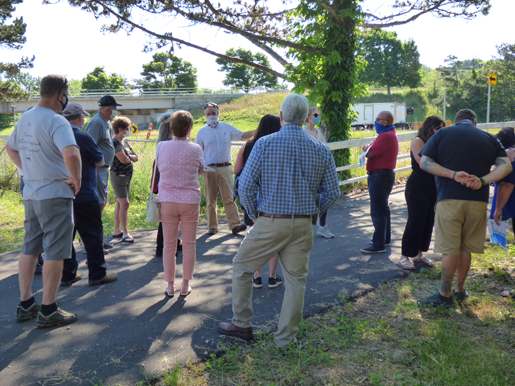 Lewiston Mayor Anne Welch has had several meetings recently with Niagara Greenway Commission Executive Director Greg Stevens regarding extending the bike path now entering the village from the Niagara Scenic Parkway on-ramp. Plans call for the incorporation of trails, bike rentals and a new comfort station at Academy Park adjacent to the Niagara River Region Chamber of Commerce office; and a path (or paths) to be incorporated next year when Center Street is repaved and spruced up by the state Department of Transportation.

“I am very excited about the proposed bike trail that will connect with the existing bike trail along the Niagara Scenic Parkway entering the Village of Lewiston at Seneca Street and continuing along South Ninth Street through Academy Park,” Welch said. “Bicyclists can choose their route from Academy Park, down North Ninth Street to Mohawk Street, and pick up the Town of Lewiston wooded trail along the parkway to Pletcher Road; or bike through Academy Park to Portage Road and continue on the proposed bike lane on Center Street where cyclists can visit shops, restaurants, scenic waterfront attractions and hotels. Hopefully in the near future, the bike trail will continue along River Road to Youngstown and along Lake Ontario.

“More people are biking, especially during the COVID-19 pandemic. People are spending more time biking with their families and we have seen a major increase in cycling. It’s fun, it’s healthy, and it’s a great mode of transportation.

“We are currently working on the proposed plans and I’m looking forward to this project.”

A main feature of the Greenway Trail connecting Buffalo to Youngstown is a bike path. Stevens has said 8.5 million bicyclists are projected to visit Western New York annually to traverse the Empire State in this way.

In late June, he told local leaders, “For the last six months, we’ve been working on a plan for what we call the lower Niagara trail and green space concept for the future development. We’ve never done this before, but now that the trail has come down the escarpment, we’ve arrived in the Village of Lewiston, and the very best part of the whole Greenway system is from here up to Lake Ontario.”

A pair of public information sessions took place just prior to the pandemic.

“It’s become very clear as we’ve put this map together that there’s no single path that makes the most sense, from here up to Fort Niagara and Four Mile; so, we’re looking, really, at a network of trails – different kinds of trails. We'd like to have off-road trails, nature trails, as well as sort of the conventional 12-foot path on the side of the road like we have for the Scenic Parkway trail going north.

“We’re hoping to be able to offer many kinds of activities, but the primary emphasis is on creating a connected cycling and walking system where people feel safe.

“Clearly, the narrow sidewalk on Lower River Road is not a place for bicycles. That’s not safe cycling. Riding out in Center Street is not safe cycling. The kids going downhill on the sidewalk on Center Street, the Chamber of Commerce, the Center Street business association, have been very clear that that’s not what they want. So, we're looking for a significant improvement in the connectivity and the safety of cycling and walking so that more people will visit Lewiston by bike and by walking instead of everything being car-based.

“The services, the shops, the stores you have here are perfectly designed for cycling tourism and active recreation; so, we’re very excited about tying this all together, connecting it to Youngstown and the rest of the system. But there’s a lot of choices to be made here, and we want to make sure that we’ve involved the community and you all have a chance to talk and think about what we're trying to accomplish.”

Stevens noted funding for the bike paths would require a combination of state funds, municipal contributions and grant monies, to be applied for, collected and used over the course of this decade.

The bike study is online at https://lowerniagaratrailstudy.com.