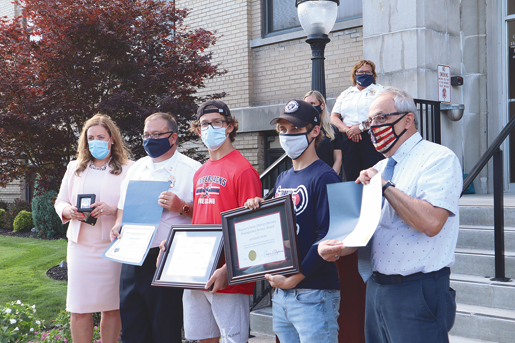 Local officials honored Anthony Swan and Simon Griskonis, who stopped a vicious assault of another student on July 1.

A pair of North Tonawanda high school students were honored Monday by local officials for doing the right thing when it mattered the most.

On July 1, a group of teens viciously assaulted a young lady on the school football field while others stood by and videotaped the incident on cell phones. The assault continued until two members of the high school wrestling team, Anthony Swan and Simon Griskonis, spotted what was happening and took action. The pair confronted the attackers, escorted the victim from the field, and helped walk her back to her family’s home.

In a short ceremony held on the steps of the North Tonawanda City Hall, local officials presented the boys with honorary certificates from the city, as well as Distinguished Service Awards from the district attorney’s office.

“It is not every day that we have somebody who goes to the assistance to help somebody else,” said North Tonawanda Police Chief Thomas Krantz. “It’s easier to just walk away and pretend it’s not happening. Well, for these two young men that wasn’t the case.”

North Tonawanda Mayor Arthur Pappas also applauded the boys, not only for the bravery they displayed on the field that day, but for the humility and candor they’ve displayed since the incident.

“The answers and responses you’ve given to the media in the past, ‘Well, we just did what we thought was right; we were just there.’ ... I think that deserves a lot of recognition, because you don’t see a lot of that these days,” Pappas said. “The reward here is not just media attention. ... You’ve gotten the respect of fellow students, the respect of adults, the respect of the police – that’s a lot of accomplishment for two high school students. This accomplishment will go long into your lives, instead of just looking at a certificate. This will be in your minds forever, and it will be in the minds of that victim forever. So we’re really a thankful community.”

Elsewhere, Pappas added, “You both passed the test for being real human beings, showing empathy, sympathy and compassion for your fellow students, and your fellow people, by putting them in front of yourselves.”

Niagara County District Attorney Caroline Wojtaszek described what it was like seeing the video for the first time, not only as a law enforcement official, but as a mother.

“I started to watch this video and was sickened. Not only that children of this age would treat one another this way, but that it was going on in North Tonawanda – in my community.” Wojtaszek said. “I watched, like everyone else, in horror, until these two young men stood up. And I just cried. Because I’m not only a district attorney, but I am a mother of three teenage children; and I look to the parents here, too, who frankly, deserve awards, as well, because I know how hard it is to raise teenage kids, and teenage boys nonetheless.

“We all hope and pray that our children would step up and do the right thing in a moment like this. That we have instilled in them the character and the integrity to make the right choice when the time comes. … They did the right thing when the time came. Everyday in the district attorney’s office, along with members of law enforcement, we read horrible things and this was as horrible as they come, but on the flip side of that we see the best in humanity as well.”

Shortly after the video made its way to social media, the victim’s parents released a statement to the media in which they also praised Swan and Griskonis for their actions.

“As many stood and watched, only two courageous, outstanding young men stepped in to help, Anthony and Simon. These boys did not know our daughter, they just knew she was in trouble, and they took action. I can’t think of where we might be today had they not stopped this heinous assault on our sweet child. This being said, we cannot find enough words to praise and thank not only Anthony and Simon, but their parents, for raising young men with such courage, love and just basic human decency.”

“Thank you, Dawn and Joseph.”