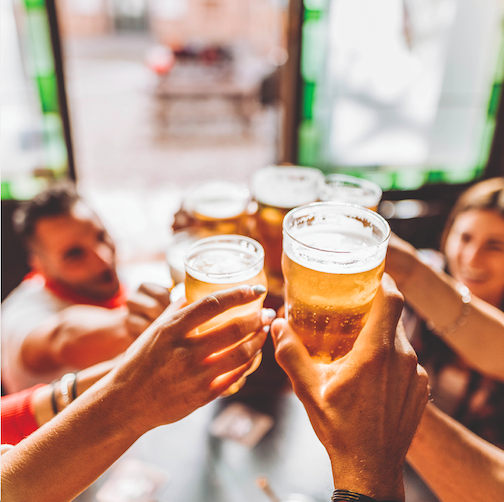 Cuomo: Younger people in bars the issue when it comes to spreading coronavirus

Gov. Andrew Cuomo said young adults congregating in bars is a surefire recipe for the spread of the coronavirus.

In a conference call Tuesday, he further explained his recent decision to restrict alcohol service in establishments where food is not served.

“In terms of the bars, restaurants, I've seen the stories and read the stories in the news media. I think there's a basic disconnect,” he said. “We never authorized bars to reopen. Most states have not allowed bars to operate. New Jersey doesn’t allow bars to operate. Bars are congregations of people milling about. That is exactly what we’re trying to avoid. So, we never authorized bar operations.”

Last week, the governor called the hatching of outdoor bars a “perversion” of the “New York Forward” regulation that permitted restaurants to welcome patrons back in regions entering phase two and phase three of reopening.

He added, “Bars are the last type of activity you want to encourage: large-scale congregate.

“Outdoor dining (is open). Why? Because outdoor dining is different. You go to dinner, you bring a few friends, you sit down at a table and you eat. When you are dining, you are at a table. You're not getting up and going table to table; you're not standing, hobnobbing; you're sitting at a table and eating. The tables are socially distanced. So it's just you and the people you are at the table with. That's one situation, and that's one physical definition.

“Bars, drinking, are totally different. It’s just a large congregation of people walking around, standing around, with a beverage; but it's just a group of people. That was never allowed.

“And then we know the younger people can transmit it easily. And that's where the problem is coming from.”

“We saw a drop in the proportion of 30-39-year-olds testing positive last week, however the increase among 20-29-year-olds brings that proportion to almost 36% of new cases,” Commissioner of Health Dr. Gale Burstein said. “The positivity rate among the 20-29 age group was 3.4% last week, which is double that week’s overall positivity rate.”

“We cannot take our eyes off this disease, and the trends we are seeing among younger people are concerning,” Erie County Executive Mark C. Poloncarz said. “We know how this disease is transmitted, and the choices each person makes to avoid large gatherings and to wear a mask when in public spaces are going to help us keep businesses open and get kids back to school.”

The governor said, “I understand bars are under terrific economic pressure, as are many other organizations. And they took this outdoor dining as an opportunity to do outdoor drinking. But that's not what the regulations intended. Right?

“And this is now a significant problem – and local governments have not been doing the enforcement. The state is not the primary enforcer of these laws, the local governments are. And I have been asking them for weeks to step up to do their job.”

Cuomo announced the State Liquor Authority suspended the license of four bars and restaurants in downstate New York. Since the onset of COVID-19 pandemic, the SLA has brought 410 charges against establishments for violating the executive orders, suspending 27 licenses for violations.

“I'm sorry it’s come to this, but it's a dangerous situation. … And not only dangerous, but the bad operators will make it worse for themselves and for the good operators,” he said. “I've spoken to many bar and restaurant owners who are doing the right thing and playing by the rules. And it's unfortunate that the good get penalized for the actions of the bad.”

He explained, “The good thing is that people are taking notice of their surroundings are. And now it's unusual for people to see people without masks, so people notice that. And I hate this term, but it's a ‘new normal’ in many ways that people seem out of place when they don't have their mask on when they're in a large, crowded area. So, that's a good thing.

“We work with (Niagara County) Sheriff (Michael) Filicetti, his staff, Jonathan Schultz, director of Office of Emergency Management, we work with him on a daily basis. Those are two of our more key departments that we deal with on a daily basis. Just this weekend, we were dealing with them on issues. So, we need to make sure that we're following the same guidelines and make sure that we work together as a team, because that's really what the public expects from us – and they should expect that from us, that we're working together. We'll continue to do that.

“It's difficult, because we don't want to close down businesses. That's the last thing we want to do – and that's not good for anybody. But if people are putting others at risk, we have to make decisions, be very decisive and very consistent, and make the decisions that we'd rather not, because it's for the betterment of the entire public – not just individual businesses.”

Niagara County Legislature Chairwoman Becky Wydysh said, “I'll be very clear when I say there are many bars and restaurants – most that I have been in – that are really trying hard to follow these guidelines and trying to comply with the state guidelines, but it can be difficult when patrons come in and don't want to follow those guidelines while they're in the establishment. And again, I ask all of the residents to really remember that this is about your businesses and their financial well-being – and the fact that you want to go to those businesses; you want to be able to go to your favorite restaurant or bar and see your friends and enjoy that company, and we can only do that if those guidelines are followed. So, do it for yourself, do it for your loved ones, to keep everyone healthy, but please also follow those mask guidelines for your businesses.

“The governor made it very clear today that the businesses that are not following the guidelines and the rules are the ones that could potentially ruin it for the ones who are; and that's very discouraging for the businesses who have worked so hard and struggled for so long to put new protocols in place, to make sure that their employees are trained and educated, and to try and help their patrons be educated and follow those guidelines, as well.

“So, I again I asked all of you, please, when you're out and about in public, at all times have that mask. Know the rules when you go into that business, and follow those rules for the benefit of not just yourself and the other patrons, but for that business, as well.”

Last Thursday, Cuomo said all restaurants and bars statewide would be subject to new requirements that they must only serve alcohol to people who are ordering and eating food, and that all service at bar tops must only be for seated patrons who are socially distanced by 6 feet or separated by physical barriers. Under current law, only establishments that serve food are permitted to serve alcoholic beverages.

Citizens who see violations or are concerned can report complaints, including photos, to the State Liquor Authority at www.sla.ny.gov.

On Thursday, Cuomo said, “You get groups of young people – it’s warm; they’ve been locked up for a long time; we like to socialize – I get it. You don’t socially distance, you don’t wear masks, the virus spreads. And it is happening.”

He added, “There is an attitude that young people are immune. You are not. (Age) 21-30, the virus can kill you. And if it doesn’t kill you, you can bring it home and give it to someone inadvertently, and it can kill them.”