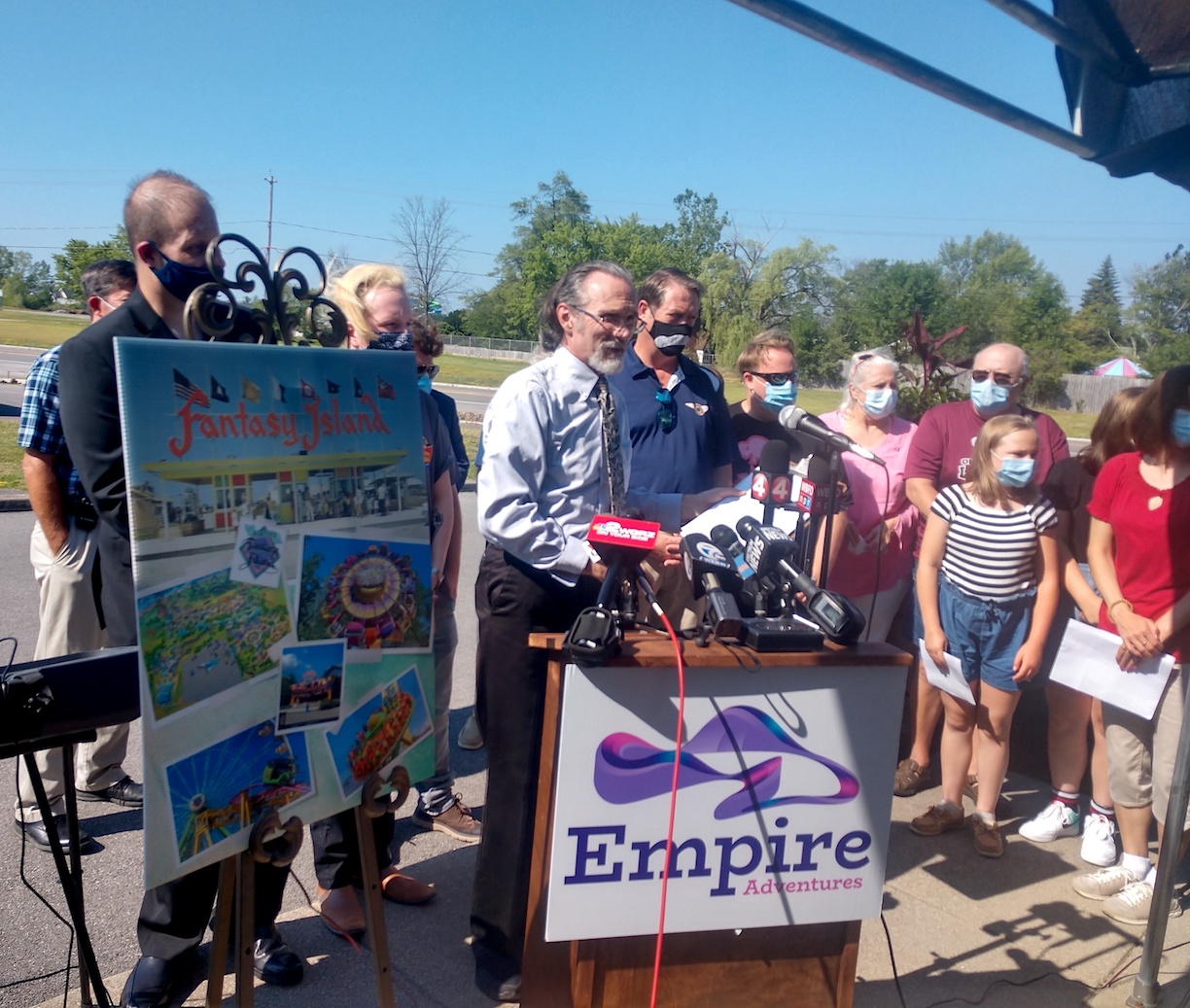 Coalition to save Fantasy Island introduced

New York State Assemblyman Angelo Morinello, who has fond memories of visiting Fantasy Island with his family and friends, calls the efforts of Empire Adventures to bring back the amusement park on Grand Island extremely important, and said he supports the route outlined at a press conference on Thursday.

“This is an extremely important project, because it shows a renewed focus in small-town U.S.A., and small-town U.S.A. is truly the backbone of our country and our economy,” Morinello said. “I also appreciated hearing them talk about coming up with the initial corporate capital and not pandering to the state that they want to do this project, but they have no money. They are doing it differently than most developers who come to the state.”

Morinello said his favorite attraction at Fantasy Island was the Wild West show and the shootout with the stuntmen falling from the roof to the ground four times a day.

Ironically, the most popular character in those shows for the past 30 years was Black Bart, played by Bill Baldwin, the CEO of Empire Adventures, who has been working diligently with his team since early March on trying to save the park.

Baldwin introduced a coalition of businessmen under the banner of Empire Adventures at a morning press conference across from the park in front of Brick Oven Pizzeria & Pub on Grand Island Boulevard. They held the event at this site, because there was no power inside the park – which is now secured from trespassers thanks to its owner, STORE Capital Real Estate Investment Trust Co.

The event, which was streamed live on the Empire Adventures Facebook page, featured speakers including Connecticut businessman George Marenna Jr., president of Marenna Amusements, who is the ride adviser for the group and who has proposed selling 14 rides and attractions to begin rebuilding the nearly vacant 75-acre park after its previous owner, Apex Park Group, abruptly announced in February it was shutting the park and selling everything inside the gates.

Joining them was Jim Sharpe, former Town of Grand Island deputy supervisor and former president of the Chamber of Commerce; current chamber President Eric Fielbelkorn; Tim Herzog, owner of the Flying Bison Brewing Co. in Buffalo; and three generations of the Vitko-Woods family, longtime Fantasy Island season ticketholders, who spoke passionately about their experience at the park over many years.

Baldwin began the press conference by introducing town resident Fawn Lundquist and her six children, all under the age of 10 – including two sets of twin girls. They created a July 4 race and parade on Kirkwood and invited Black Bart to attend. When he did, they held a 50-50 raffle and presented him with $200 to save the park.

In regard to funds needed to take over the park for the 2021 season, which would be the 60th anniversary of Fantasy Island, Baldwin said the group needs to raise at least $5 million to clean up the site, obtain new rides and attractions, and begin off-season operations. He said discussions are underway with investors and three banks for loans. Baldwin is in possession of a letter of interest from STORE Capital for a 15-year lease with three five-year renewal options. He also wasn’t closing the door on purchasing the entire 85-acre footprint if that is where the investors want to go.

“They have a very good chance of making it here,” said Sharpe, a lifelong Island resident who remembers the amusement park as being the “Shining Star” of Grand Island when he was growing up. “I will throw my entire support behind their effort so we can see this park open again as it once was: family entertainment that is part of the fabric of this town. The biggest advantage they have is the heart for this project. With the heart they showed here today, they have a very good chance of being successful. The presentation I heard today had a lot of heart in it, but more important, they told a complete story of the importance of this park in this town and the memories it has created for so many families.”

“This wasn’t just about corporate money coming here with a business plan. This was more about the importance of Fantasy Island being a viable business in the heart of our town,” Sharpe added.

Fielbelkorn, who will join Sharpe and Baldwin in talking with perspective investors, added, “They know they have a lot of work in front of them and raising the needed funds is going to be key. But I have seen this so many times before; if you have your heart into something, you have a very good chance of succeeding. They have shown that, so we are here to support their efforts.”

Herzog, of Flying Bison Brewing Co., spoke about his experience of bringing his kids to the park and hearing sounds of kids having fun and laughing as they experienced the rides or attractions throughout the park.

“This is part of the pulse of our community and I will do what I can to help him,” said Herzog, who will also explore creating a beer garden for the adults while the kids are playing in the park.

“When I think of Fantasy Island, I think of two words: Fun and family,” said James Vitko of West Seneca, the grandfather of the three generations who have fond memories of the park.

Baldwin, who truly hopes the COVID-19 pandemic is a distant memory in May 2021 so he can begin an elaborate season of 60th birthday parties, also offered two words he thinks of when seeing Fantasy Island open again. “Fun. Wow!” he exclaimed to open the conference.