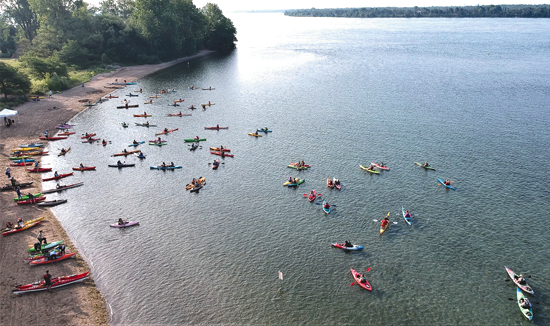 Paddles Up goes online for 2020

Paddles Up, an annual summer event at Beaver Island State Park, will have to wait until 2021 to celebrate its 15th year in the Niagara River. The event has been canceled due to the current COVID-19 restrictions and the concern for participants’ health, announced Michelle Lockett, community engagement manager at Niagara River Greenway.

In its place will be an online paddling event. Participants are encouraged to post photos and videos of their adventures on area waterways. The “Paddles Up Solo” Facebook event will take place July 17-31, and participants are encouraged to take a photo or video of themselves paddling and post it to the “Paddles Up Solo” Facebook event page, https://bit.ly/PaddlesUpSolo, to automatically be entered into a random drawing for one of three prizes: a dry bag from Buffalo Niagara Waterkeeper; gift certificate for two guided kayak tours down the lower Niagara River from Niagara Outfitters; and passes to Niagara Falls State Park attractions at the Cave of the Winds and Maid of the Mist.

Kids can also participate in a coloring contest, cosponsored by the Rotary Club of Grand Island. The Paddles Up coloring page will appear next week in the PennySaver and Island Dispatch. The deadline to submit completed colored pages is July 27, with winners selected by the end of the month.

The Rotary Club of Grand Island is cosponsoring the contest with support for prizes from Tops Friendly Markets, Blue Water Marina, and Niagara Outfitters. Reprints of the coloring page will be available at Tops and Niagara Frontier Publications.

The colored pages will be cataloged with a number and age group. The pages will be photographed and presented on the Rotary Club of Grand Island Instagram page (rotaryclubgi). A panel will review the cataloged entries and provide a first-, second- and third-place winner in each of three age groups.

Paul G. Leuchner, commissioner emeritus (2005-09) of the Niagara River Greenway Commission, founder of Paddles Up Niagara and event chairman (2006-15), said, “Even after 14 years, I still get questions from people who have heard about Paddles Up but don’t know anything about it. I tell them it is a unique opportunity to paddle the placid waters of the Niagara River and run their hands through crystal-clear river waters dating back to the age of the glaciers. It is where you can see a soaring bald eagle or a diving osprey seeking that elusive fish. It is an event that allows you to run your imagination back to a time long ago when the canoes of Native Americans, early explorers and even a president of the United States plied these waters. If you concentrate hard enough, some have even thought they heard to sounds of cannons firing as the War of 1812 raged on the Niagara Frontier. This is what Paddles Up Niagara is all about.”

In explaining how the event came to be, Leuchner added, “Paddles Up Niagara came to mind as way to bring people to the Niagara River so they could experience its crystal-clear waters, breathtaking scenery and unique wildlife. Our first event drew over 100 paddlers from everywhere. People were hooked. Parents, children and grandparents return year after year. Paddles Up has morphed into a tradition that bring families together to take in the ambiance of the nature environment.

“As the years passed, our paddlers developed a real love for the Niagara River. Paddles Up was the catalyst that brought families together to spend a relaxing and fun day on the water. Parents and kids took to the river year after year, and in no time at all Paddles Up Niagara became a family tradition. Even though many of those children have grown up and now have children of their own, they still return to enjoy this annual event on the Niagara River. Now steeped in tradition, Paddles Up Niagara is building its own legacy.”

Paddles Up traditionally includes three different paddle events showcasing the natural beauty of Grand Island and the Niagara River. One takes participants to Strawberry Island and Motor Island, where they see the wetlands, heron rookery and a bald eagle nesting area, plus dozens of great blue herons and egrets.