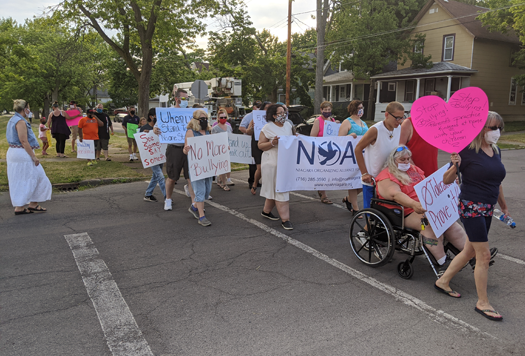 The violent attack of Amelia, a 14-year-old North Tonawanda High School student, has galvanized a local community to come together in support, and to help put an end to bullying altogether.

In an incident that occurred on July 1, a group of juveniles were videotaped brutally kicking, punching and slapping a young girl on the school’s athletic field. In the video, the attackers can be heard hurling insults at the victim, and also indicate that they had poured urine all over her.

The attack finally came to an end when Anthony Swan and Simon Griskonis, two members of the high school wrestling team, spotted what was happening and took action. The pair confronted the attackers and escorted the victim from the field.

On July 8, North Tonawanda police confirmed four juveniles, three girls and one boy, were charged with third-degree assault in connection with the incident. Police also said that, per a city anti-bullying law that was put into effect in 2017, the parents and guardians of the four have been placed on a 90-day notice. If any of the juveniles reoffend during that period, the parents and guardians could face charges themselves. According to the ordinance, parents can face a $250 fine or up to 15 days in jail.

The father of one of the girls seen in that video attacking the victim posted a statement. He said there is no excuse for what happened and it makes him sick.

Video of the incident made its way onto social media and stoked a visceral response throughout the community. Local community members quickly rallied to support Amelia. Some sent cards and online messages of support, many of whom shared their own experiences with bullying. 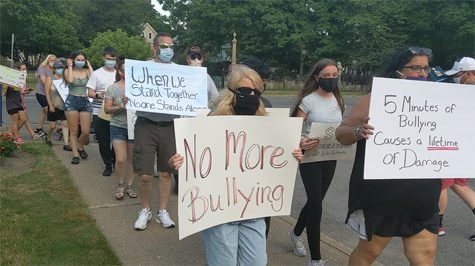 A number of local groups and organizations also reached out in support. The High School wrestling team sent bouquets of flowers to the girl while the LadyJacks softball boosters started a collection to “provide the girl with money for a back to school wardrobe to start the year off feeling good about herself.” Additional funds would be used to get a gift for the boys who assisted her. Donations can be sent to @NTLadyjacks20 Venmo account.

Local businesses have also reached out, including Submasters, who offered to cater a party for the girl, and John Presti of Presti Karate Studios, who offered the girl and the two boys free karate lessons.

However, beyond the donations, gifts and well-wishes, some community members are hoping the tragedy can serve as a flashpoint in the larger battle against bullying.

Twice this week, July 6 and 9, dozens of demonstrators peacefully marched the streets in North Tonawanda, calling on local officials to help put an end to bullying and violence.

One of the event’s organizers is the victim’s great aunt, Karen Donahue Porter. Shortly after the incident became public, Porter started a Facebook page “Amelia’s Warriors” as a show of support for her niece. Through the page, she has since heard stories from numerous people in the North Tonawanda that believe the problem is becoming rampant in the area.

“There’s a lot of stories that are coming out,” Porter says. “People are writing to me telling me they’ve gone to administration at the schools and they’ve gone to the police and everybody turns their head and nothing’s done about it.”

Porter also says the tragedy at the football field was not an isolated incident and that bullying was going on in school all year – to the point that her niece avoided school when she could.

The Tribune reached out to the superintendent’s office on July 2 and July 8 for comment but thus far has not received a reply.

Going forward, Porter says she hopes to meet and work with members of the police department, the school district, and representatives from the local youth center to start a mentor program to help combat bullying.

“I just feel that I think the kids need counseling or something before this happens. If there’s problems at home or if there’s problems with their self-esteem, we need to catch it early to prevent this,” Porter said.

As her organizing efforts continue, Porter is getting help from some local community organizers and activist groups. At Wednesday’s march, Leslie Nickerson of the Niagara Organizing Alliance for Hope (NOAH), said her group is offering concerned residents leadership and community organizing training to help make sure that systemic changes are made in the community. Additionally, members of the Niagara Falls Peacekeepers, a volunteer group committed to community engagement and discourse, also were on hand to participate in the march. Peacemaker’s founder, former Niagara Falls City Councilman Ezra Scott Jr., says he’s working to help Porter found a Peacemakers group in North Tonawanda.

Porter says she’s willing to put in whatever work it takes to stop and that the community needs to bring members and officials together to make sure what happens to her niece never happens again.

“We all have to work together to stop the bullies. We need to just work together as a community and as a school and the police and everyone together. Elsewhere she noted, “They say it takes a village to raise a child, and (looking at the demonstrators) we have a village here.”

Not long after the video was first released, the parents of the 14-year-old victim issued the following statement:

“This is the most painful thing I’ve ever had to write...On July 1, 2020, our daughter, Amelia, was the victim of an assault in North Tonawanda. She was attacked and humiliated in front of a dozen other kids by three girls...dragged by her hair, punched and kicked repeatedly in the head as well as having urine poured on her. This whole time, she never once tried to fight...she continually tried to walk away. As many stood and watched, only two courageous, outstanding young men stepped in to help, Anthony and Simon. These boys did not know our daughter, they just knew she was in trouble, and they took action. I can’t think of where we might be today had they not stopped this heinous assault on our sweet child. This being said, we cannot find enough words to praise and thank not only Anthony and Simon, but their parents, for raising young men with such courage, love and just basic human decency...Thank you.

The way our community has rallied around Amelia...the kind words, the gifts, the donations, and all the assurances that she is not alone and is very much loved, has been overwhelming. All the beautiful words of comfort and encouragement have brought a smile to her face. She has loved reading the messages of love and kindness....so again, we thank you all.

Most of all, it is our fondest wish this horrible and senseless act can turn into a positive for others, not only in our community, but for all these kids who suffer from bullying and attacks every day. Take the example of these young men, and rise above the bullies... show love and kindness, not hate. We thank each and every one of our family and friends, for their amazing support and love. We thank our community and all the others who have rallied up to take a stand. Most of all, we thank Anthony and Simon. Without their help, I shudder to think of where we could be today. Amelia is here. Amelia is strong. Amelia is still smiling.