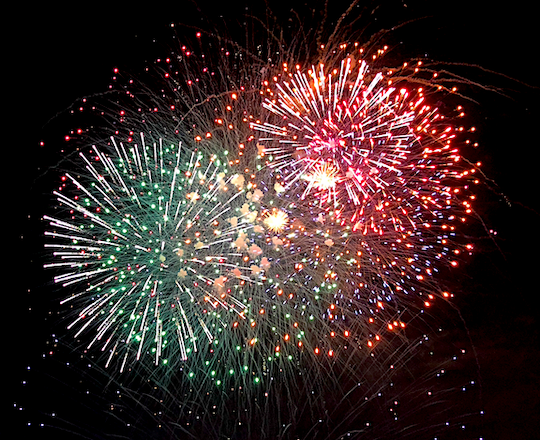 Show goes off without any reported issues

Independence Day in Lewiston had a different meaning this year, as, for one night, people were liberated from their COVID-19 quarantines and allowed to join together for a public celebration.

Residents were out in village streets and parks at dusk to watch the annual fireworks demonstration. Donations from Tops owner Anthony DiMino and businessman/developer Jerry Williams enabled the municipality to not only hold the event, but to make it a little more special this time around.

Mayor Anne Welch said, “I think it went great. And everybody I've heard from said it was terrific. We shot them up higher. We added more to the fireworks ourselves. It was Jerry and Anthony and the village, and we put more into the finale. Everybody said it was really a great display.”

Lewiston was one of the only Western New York locations to offer Fourth of July fireworks. As such, Lewiston Police Chief Frank Previte expressed concern there would be an influx of people descending upon village streets.

Fortunately, he said, “It wasn’t a zoo. It wasn’t mobbed like I had thought it might be. I thought it was very good. I had nothing but positive feedback.”

Previte noted, “It was surprisingly calm; it was nice. People seem to have respected social distancing. From what we could see, we had no issues whatsoever. It was actually a pretty good crowd.”

Prior to the event, Welch implored onlookers to obey social distancing, stay within their own family units, watch from their cars or lawns, and wear a mask when around others.

She said, “I rode around with the chief just before, and everybody was distanced – even in Academy Park they were around the perimeter of the park next to their cars. Everybody stayed with their family, like on a blanket or whatever, and there wasn't a crowd. People all distanced.

“I went down to Seneca Street like we normally do. And usually it's really packed down there. But people were in their front yards, and people to the side of the road. They were all like in little groups – like just family groups – so there wasn't any big cluster.”

Lewiston Fire Co. No. 1 Chief Les Myers said, “Saturday went well. I was up on top of the plateau and had a great view of the south side of the village as the visitors arrived. From the fire company point, all went extremely well.

“We were up on the plateau earlier to wet down the grass. During the fireworks we had a report of grass burning on the hill at Seventh and Tuscarora, but it was out on arrival of our crews. We are always proactive by having fire and EMS crews stationed around the area to reduce response time.”

Staffers from the Department of Public Works, Niagara County Sheriff’s Office, New York State Park Police and State Police also were out and monitoring the crowds and grounds.

Since mid-March, there has been a steady stream of cancellations, as event organizers partner with local and state agencies in trying to stop the spread of the coronavirus. Most notably, all Lewiston festivals are scratched through August. Artpark & Company also canceled its “Tuesdays in the Park” concert series.

Welch said the fireworks provided a sense of normalcy in a still-unsettled time.

“We needed that to come back. Everybody has been living in this fear and staying quarantined and not seeing anybody and not going anyplace,” she said. “And I think the Fourth of July meant something to them: This is our normal Fourth of July where we celebrate.

“Everybody I saw said it was great; they really enjoyed it. And everybody respected the guidelines – did the distance, did the mask – and when it was over, everybody went home.”

She noted the spectacle was “Especially for the kids. I mean, they don't understand a lot of it, and to have that fear in children, you don't want that. You want the Fourth of July, and the excitement of the fireworks.” 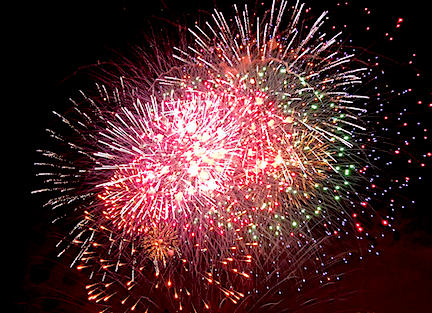 Lewiston resident Loretta Frankovitch said, “Thought it was the best show Lewiston has ever had. Book them now for next year!”

Michael Schroeder noted, “I think people honestly did a great job ‘keeping to themselves’ as was requested.”

Sarah Roat Waechter added, “They were fantastic! Thanks to the organizers. Strangely, we thought it was going to be super crowded. Cars are usually parked up and down N. Eighth, but not this year. We were pretty much the only people there.”

Town of Lewiston Councilman Bill Geiben said he and his wife, Rita, “sat near my car at Eighth and Center streets. We had our masks with us but did not feel the need to wear them as we were social distancing. We did see some face coverings and noticed that spectators were trying to social distance.

“Thought the fireworks finale was more than usual. Enjoyable evening especially with the added treat of Hibbard’s Custard. Big thanks to Anthony DiMino and Jerry Williams for their generous donations.”

Welch said, “Hopefully, from here on, it'll get more positive for everyone. Hopefully, this virus is going to go away and never come back. But if it does, hopefully we will be prepared for it.”

Though New York has the third-lowest coronavirus case rate per 100,000 people among all 50 states (1,616.8), Gov. Andrew Cuomo again warned New Yorkers that, if they “get complacent, we get cocky, we get a little arrogant,” then “that is a real threat; and it's a threat that I'm concerned about.”

At a Monday morning press conference, Cuomo explained, “You look at the festivities over July 4th, you see gatherings that are not socially distanced, they're not wearing masks. You see it in Manhattan, you see it on Fire Island.

“There are reports upstate of gatherings where people aren't socially distanced and people aren't wearing masks. You know, I don't know how else to say it: Actions have consequences. Our success was a function of our action. You change your action, you change your behavior, you are going to change the outcome. It is that simple. That curve was purely a function of what we did. If we change what we're doing, you're going to change the trajectory of the virus.”

Thus far, the Village of Lewiston has seen few positive coronavirus cases among its residents – just 15 out of nearly 2,800 people (0.005%).