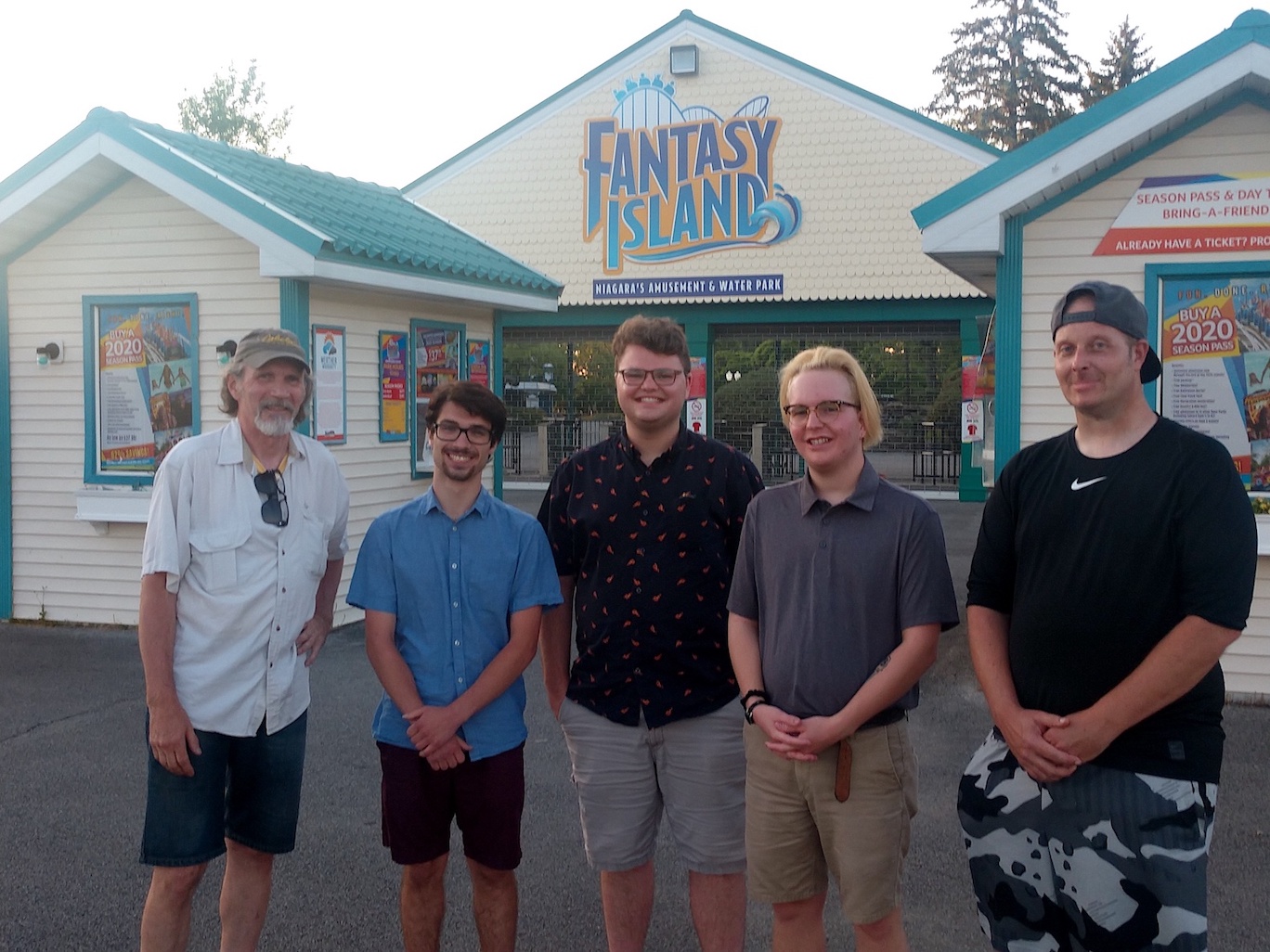 Bill Baldwin suddenly walked from an interview with tears welling in his eyes.

He stepped away from the window of the BrickOven Pizzeria & Pub on Grand Island Boulevard, across from Fantasy Island, early last Sunday evening after watching nearly 40 people climb the fence and wander onto the grounds and vandalize the park he and his business associates love so much.

Baldwin is the CEO of Empire Adventures Inc. – a local company with a letter of interest for a 15-year lease from STORE Capital to operate Fantasy Island and return it to the family fun experience it was when Martin DiPietro owned it for 22 years.

He and his friends were thankful when two Erie County Sheriff’s Office vehicles and one from the Town of Grand Island Police arrived at the site a few minutes later and began clearing trespassers from the 75-acre amusement park, which opened in 1961 and suddenly closed this past Feb. 19 when Apex Park Group of California issued a surprise announcement it was closing permanently and selling off the rides and attractions.

STORE Capital, a $6 billion leader in middle market real estate capital solutions, had purchased the property from DiPietro for a reported $11 million in 2016. Apex leased the park from STORE and, when it did not make its April 15 loan payment, the property and rides reverted to STORE. Since mid-April, when Apex’s former general manager left the site, until this past Tuesday, Fantasy Island has become a haven for vandals and trespassers – some of whom created YouTube video tours of the property, which have since gone viral and have attracted out-of-town visitors. 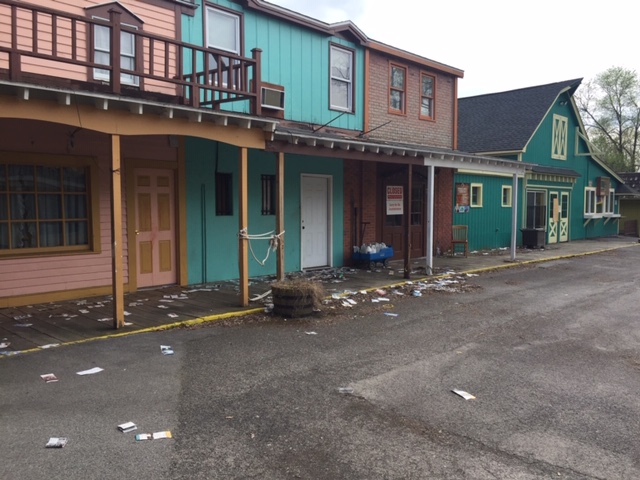 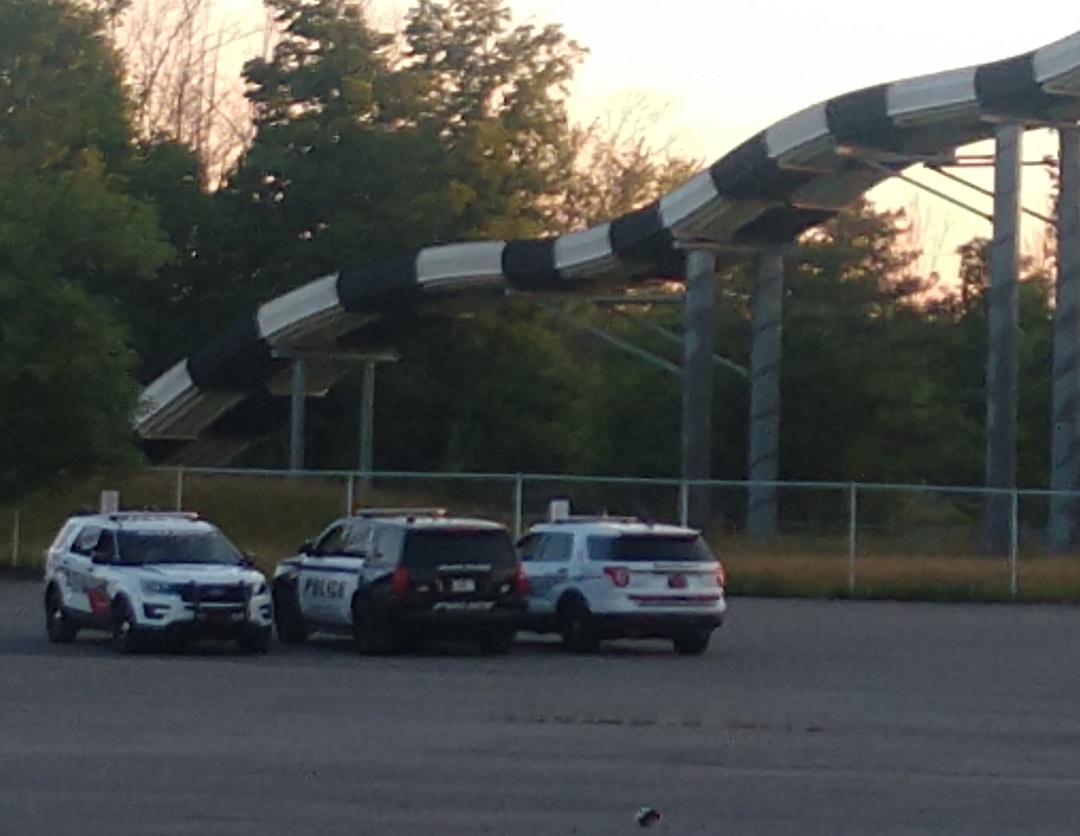 Town Supervisor John C. Whitney, P.E., learned from the media the park was closing. He was attending his first Association of Towns meeting in New York City, and has been working the phones since then to have STORE secure and clean the facility.

This past week, he learned from STORE Capital it had retained Alliance Property Services from Georgia and has been working long hours since Tuesday cleaning the debris from vandals, food and other items, cutting grass and providing security guards who have the authority to have trespassers arrested by local law enforcement.

Matt Meyers, president, and CEO of Alliance Property Services, led a caravan of vehicles from Georgia earlier this week and has been leading the effort to clean and secure the property for STORE.

“After STORE took over this property, it takes time to make an assessment of what is needed here,” Meyers told the Dispatch late Wednesday evening at the park. “We do a lot of work for them and, with my company, I have also done other amusement park clean-ups after they were sold. STORE Capital, which is a top-notch company, wants a complete analysis from us on this property, because of all the vandalism and trespassing.”

“That has now ended, as our security has the power to ask your police to arrest them and issue fines for trespassing. While I was walking the property this morning, a woman came up and said she was from Ohio and wanted to walk the park and take pictures, because she heard it was vacant,” he explained. “I told her she was trespassing and would she please leave the property.”

The extent of the vandalism is massive. Every window is broken, graffiti is written on the water slides, and rooms have been ransacked. 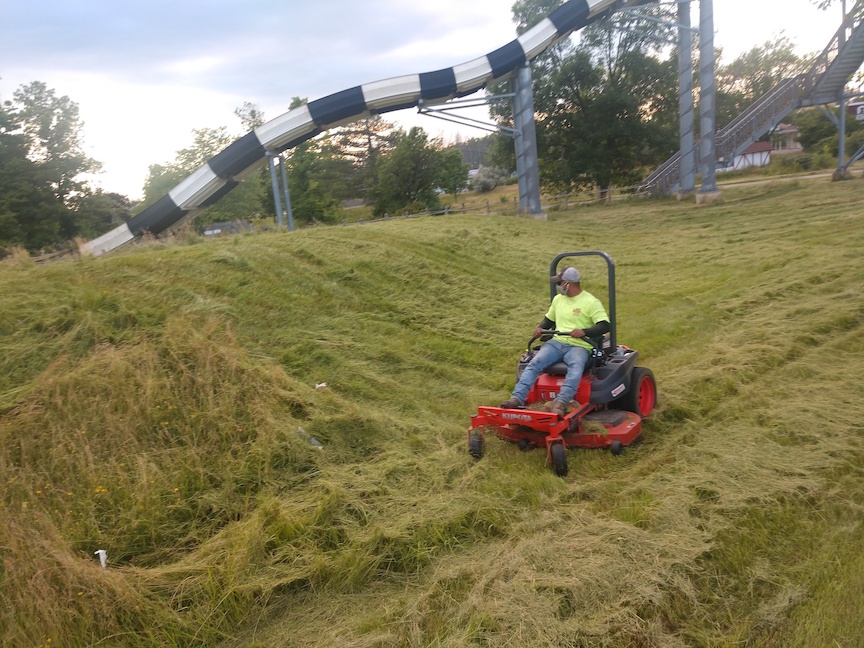 Baldwin, a park entertainer for nearly 30 years who played Black Bart – among many roles – in the popular Western shows, proudly said he was shot and fell to the ground in Western Town 28,678 times during his Fantasy Island career. Upon hearing the park was closing, he contacted his friend, Jay Wilcox, a maintenance supervisor at the park for 20 years and now chief operating officer of Empire Adventures Inc. They began brainstorming about what it would take to bring the park back under local ownership and led by a team of former employees.

As word began circulating in the media and throughout Grand Island about the real possibility the park would be gone forever, Baldwin expressed his desire to obtain a financial team to purchase it from STORE Capital.

“When we began sharing our ideas with political and business leaders in town, we could tell they did not really take us seriously and saw us as three guys who used to work in the park,” he said.

“We all knew then we had to form a real company, write a business plan, design a logo, website and establish a social media presence if we wanted to be taken seriously,” he added. “And that is what we did.”

One of Wilcox’ first calls were to George Marenna Jr., who has owned Marenna Amusements in Connecticut for 40 years with his son, George III. Marenna, who has been a fan of Fantasy Island for years and a close friend of DiPietro and Wilcox, contacted Apex before it went into bankruptcy asking to see its financial reports for the past three years.

“I saw where they spent a lot of money and that is not how you do it. I told Jay, if they were successful in obtaining the required funding, they must go old school and run it like Marty did,” Marenna said in a phone interview with The Dispatch.

“Because of Fantasy Island’s age and everyone’s memories of going there as a kid, I have always believed it is a ‘Diamond in the Rough,’ ” he added. “Jay Wilcox is awfully familiar with the outdoor amusement park business and he goes back to when Marty owned it. Unfortunately, when you get a big corporation mixed into what people are used to at Fantasy Island, it will not work out very well. 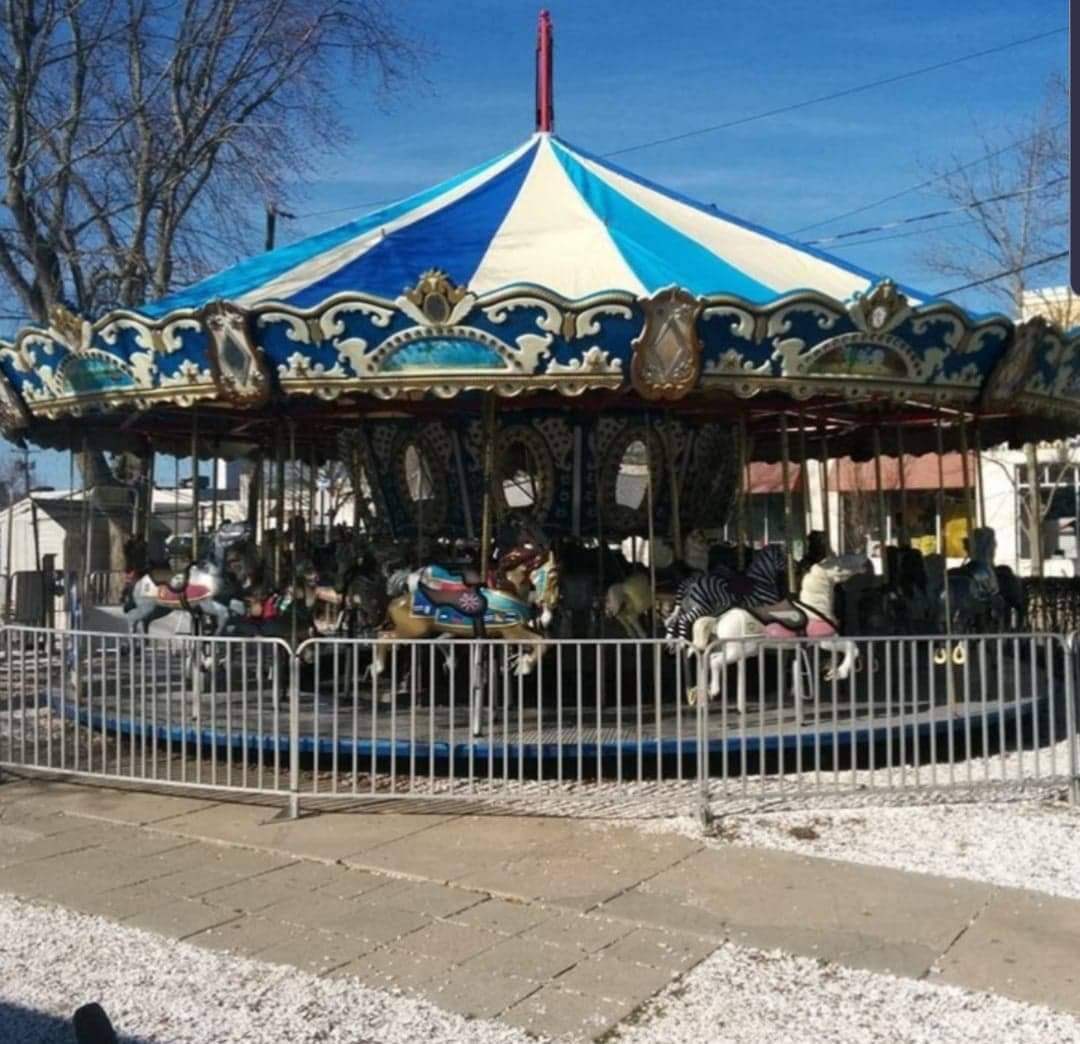 The carousel that Marenna Amusements will provide to Fantasy Island. (Image courtesy of Empire Adventures Inc.)

Marenna was so impressed with the business plan Empire Adventures created he became part of its management team as a ride consultant. He has also offered them 14 rides and attractions, including a 36-foot tall, 24-horse vintage carousel for $5 million, with $2.5 million down, and he has agreed to hold the paper until they are up and operating.

“Once I receive the down payment, I will load everything up and be there with a crew of 16 to help them clean up the park and lay it out properly. We do not just put a ride or attraction in place, but rather we create an ambiance with landscaping and other things to really make it look nice,” Marenna noted.

With his offer in hand and the COVID-19 pandemic in full swing with nonessential workers sequestered at home, Baldwin and Wilcox began a series of virtual meetings with his group, which includes Adam Molnar, director of marketing; Sam Adornetto, director of public relations; and Logan Benjamin, webmaster.

During all this time, he was also trying to connect with someone from STORES, located in Arizona, while reaching out to several financial institutions and investors via phone calls, text and Zoom meetings. Once Baldwin connected with STORE Capital in early April, he was assigned to an account manager, Mike Volk, who was reviewing its business plan and vision for the future.

Two weeks ago, Baldwin and Wilcox expressed an interest to purchase the park, and Volk informed them the price was $5.5 million for the venue, as is. Wilcox knew the property was appraised at $4.6 million, so Baldwin opened with a $4 million offer and Volk countered with $5 million. Volk suggested since they were $1 million apart, they consider a lease arrangement. After discussing numbers, Empire Adventures received details of a 15-year lease agreement on June 26. It includes three five-year renewal options with a $50,000 down payment due within 14 days of signing the agreement and the first payment of $275,000 due on June 15, 2021.

“STORE has been exceedingly helpful in trying to help us make this work,” Wilcox explained.

They are now seeking financial support, because the investors they believed were part of the team have now stepped back.

“I guess no one wanted to be the first one’s in, and we were left with no capital to use for the bank loans,” Baldwin said.

A local bank has offered a $5 million loan, but it first needs to have $2.5 million in its account.

“We have the experience and know how of Marty’s success,” Wilcox explained. “Taking that and putting the park back to the way it was and offering more of a family atmosphere for customers is what we will be about. Apex’s business model was not customer-service based; it was all about the bottom line.”

What has the Empire Adventures team more fired up to obtain the park was seeing firsthand what the vandals had done to their beloved amusement park.

“Once we began negotiations, STORE gave us permission on May 22 to tour the park, so they gave the Sheriff’s Department permission to open the gates for us. What we saw was disgusting,” Wilcox said. “We knew what a beautiful, fun place this was years ago and, despite the damage, we knew we could make it beautiful and fun again.”

“When you bring your family to an amusement park, it’s not as much about the rides as it is about the atmosphere inside the park,” he explained. “You want to feel safe and you want to have fun. It must be family-oriented. There is a recipe for that, and these guys have it. They just need the capital to get started.

“I am a hands-on operator and I have had great success in each of the parks I have designed and installed rides at. But you need investors to get started and give them working capital. This could almost be set up like a hedge fund with local investors saving the park and then getting something at the end.”

Meyers, of Alliance Property Services, knew all about the history of Fantasy Island and said the model DiPietro established when he owned is one this new group should follow if it obtains the park.

“That gentleman knew every inch of the park and how to fix things when they broke. He put his heart and soul into it, and that is what you must do to be successful in this business,” Meyers said.

“It will be very expensive to bring this park back, and meeting all of the state regulations and with the big unknown of what this world will look like after the COVID-19 pandemic,” he added. “You need investments for investors who will come in with a vision to recreate a park in this wonderful community.”

“I would love to see a group come in to save this park,” he said. “It has been here since 1961 and it is part of the fabric of Grand Island. We had some great times going there as a child.”

“I have such fond memories of going to Fantasy Island as a kid; it would be so great if future generations could have the same fun-filled and wholesome Fantasy Island experience – that is why I am so supportive of this reopening proposal.”

Wilcox said Empire Adventures’ vision is to create a “family-friendly, safe amusement park that will be fun for the entire family and that brings back a lot of what Marty DiPietro had when he owned it.

“Fantasy Island needs to come back.”

For more information about Empire Adventures, visit its website at www.empadventures.com.

This video provides an in-depth look at the state of Fantasy Island in recent months. Note: There are no acts of vandalism in this recording.