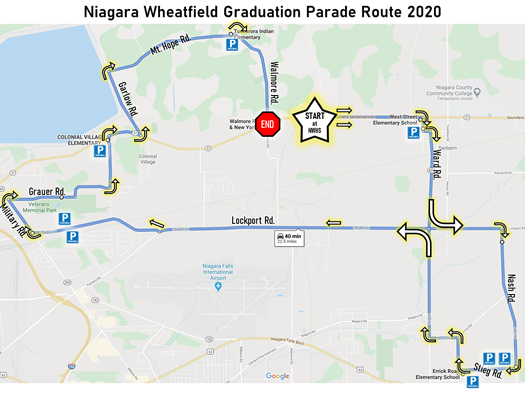 Graduating seniors from Niagara-Wheatfield High School are set to get a send-off to remember on Saturday, June 20. Co-developed by school administrators as well as students, the three-part graduation ceremony will include a virtual ceremony, drive-up commencement and a community parade.

The school’s commencement ceremonies are typically held at Artpark each year. However, due to COVID-19 restrictions, the school will hold its ceremony on its middle school/high school campuses. This will mark the first “Granting of Diplomas” on the Niagara-Wheatfield campus in over 40 years.

The day’s festivities begin with a virtual ceremony at 10 a.m., which will include speeches and pictures from students. Afterward, an outdoor campus tour will allow graduates to “walk the stage” and receive their diplomas.

Following that, a celebratory driving tour and granting of diplomas will begin at 12:30 p.m. There, the graduating class (predivided into thirds) will arrive in their own vehicles at the campus at designated times. Due to space limitations and safety concerns, there is a two-vehicle maximum per family. Cars will then circle the adjoining high school and middle school campus where they will be met with a spirit line of cheering faculty and staff.

In front of the middle school, the graduate will exit the vehicle and “walk” for the reading of their name and awarding of their diploma. During this time, family members are permitted to pause for photos as they would at a regular ceremony.

Finally, beginning at 6 p.m., graduates will conclude the day’s festivities by taking part in a graduate parade through the school community. The parade will be led by community first responders and will take place along a designated parade route (shown above) throughout the town. Students are encouraged, of course, to appropriately decorate their vehicle to celebrate the occasion.

For friends and loved ones who were disappointed they wouldn’t be able to attend, the district has you covered. The entire special event is set to be professionally recorded and will be televised at 8 p.m. Saturday, June 27, on WUTV Fox-29 in an hourlong celebration of the Niagara-Wheatfield seniors.

A great deal of planning and dedication went into this year’s N-W high school graduation celebration, an effort not lost on many students.

“Our district is amazing,” senior class President Katelyn Hoover said. “They’re putting in so much effort just so we could leave school on a good note instead of regretting those things we were missing out on.”

The sentiment was shared with senior class Vice President Kamal Allen, who said he was happy with how everything turned out.

“I know it’s not ideal, but our administrators and our class advisers are working so hard to give us a lot. I know a lot of schools just had students go pick up their diploma and didn’t do anything for prom, but our school wanted to do something a little extra. It obviously wasn’t the best scenario, but it was still a lot of fun. … It’s nice we have a little extra ‘oomph’ for ours,” Allen said.

Because of the pandemic, graduates across the country were forced to miss out on many of the senior-year traditions that are so memorable to so many people. But the pandemic also took away the sense of community and camaraderie for many students, as relationships between students and administrators alike seemed to abruptly end.

“Once it was confirmed that school was going to be closed for the rest of the year, we felt really bad because we were just kind of cut off. We didn’t get to say our last goodbyes,” Allen said.

But the effort hasn’t just been among the administrators. Class officers had their hand in a number of year-end plans, many going well beyond graduation in hopes to reclaim some of what had been lost this year.

Officers set up their own Instagram page “N.W. Grads 2020” and compiled hundreds of students’ post-high school plans along with pictures. Earlier this month, in lieu of a traditional prom, students and administrators setup a radio prom on WKSE “KISS” 98.5-FM, where students got to “take control” of the station for the evening.

Perhaps most interesting, students are actually working to set up a one-year reunion, so the Class of 2020 can have one last celebration together. After a vote was taken among seniors where 97% said they were in favor of the plan, student officials worked to secure funds from the district.

“Niagara-Wheatfield has no alumni fund. So, usually once students leave the school, there is no alumni fund to tap into. So, reunions are always individually self-funded,” Coyne explained. “This was a way that the superintendent and the administration office are making an exception ... to allow them to have something in the future.”

Coyne said he was proud of the way the student officers have taken the initiative to make the best of the current situation.

“We really try to promote them to take the lead, this is their class. … I mean, it’s their money and they deserve it,” Coyne said.

Allen acknowledged the effort was probably a bit more than what typical student officers do, but is proud to set the bar higher for incoming student officials.

“It’s kind of strange: I don’t think class officers in the past have ever really done this much in regards to representing the whole class – that’s definitely something new. I think in doing that we’re setting a precedent for the class that comes after us,” Allen said.

In lieu of a traditional graduation ceremony, graduating seniors from North Tonawanda High School are set to take part in a drive-thru diploma conferral from 8:30-11:30 a.m. Sunday, June 28.

Graduates and members of their immediate families are invited to drive to the NTHS (together in one vehicle) campus where they will receive their diplomas. Graduates are expected to wear their caps, gowns, top 10 medals, and honor cords, and are encouraged to decorate their vehicle with school colors to help add to the celebration.

Vehicles will enter the high school campus at our main entrance on Meadow Drive, proceed to the right following the science wing roadway, and continue on toward the concession stand plaza near the new athletic stadium, where diplomas will be presented.

The drive-thru venue will be decorated in school colors to enhance the celebration of the graduates, and “Pomp and Circumstance” will be playing as they make their way across the stage. Organizers are hoping for great weather, but this will be a rain-or-shine event.

When one’s vehicle reaches the balloon arch, graduates will exit the vehicle and walk up on the stage to receive their diploma cover. All other occupants of the vehicle must remain in the vehicle, but are free to take pictures. Photographers will also be on site to take formal pictures of each graduate. Graduates will then be directed to a photo opportunity area where there will be a custom designed backdrop.

After their photo shoot, graduates will be presented with an envelope that contains their actual diploma and information about obtaining copies of their formal pictures. Graduates will then be required to sign for receipt of their diploma, reenter their vehicle, and proceed on the roadway back toward Meadow Drive.

Once the graduates have received their diplomas on campus and returned home, the high school will premier a prerecorded “Virtual NTHS 2020 Commencement Ceremony” video at 1 p.m. The virtual ceremony will include most of the traditional elements of a NTHS commencement, including speeches delivered by administrators, a keynote faculty member, and the valedictorian and salutatorian.

Honor pin, service learning award and military enlisted graduates will also be recognized during the virtual ceremony. There will also be traditional music and prerecorded musical performances. Of course, a photo of each individual graduate will be prominently featured during the virtual procession. The ceremony will conclude with a proclamation of graduation and the “turning of tassels.”

The video is slated to be posted on Facebook Live, YouTube and Vimeo. Links to the platforms will be available at the North Tonawanda City Schools website (https://www.ntschools.org) on June 28. After the video premieres, it will remain available so it can be shared and replayed at a later date.

In a statement posted on its website, NTHS wrote, “We are pleased to be able to afford our Class of 2020 graduates, who have worked so hard to earn this celebration, a unique commencement experience. It will be both memorable and historic.”