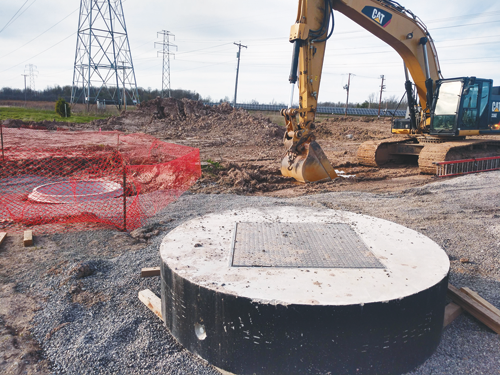 A 30-inch gravity sewer on the north side of Whitehaven Road.

New sewer line to be connected

When John C. Whitney, P.E., joined the Town of Grand Island’s Department of Engineering & Water Resources in 1986, the force main sewer line from the South Grand Island Bridge to Whitehaven Road was only 8 years old. After 42 years of service, that line is now being replaced due to its deteriorated condition.

Whitney, now the town supervisor, will join Town Engineer Robert H. Westfall, P.E., next month when a new poly vinyl chloride (PVC) sewer line will be connected at pump station 8, under the bridge on East River Road and across from the fishing pier, to complete the $2.7 million project.

The original sewer pipe was an asbestos concrete mixture, a mainstay in building sewer lines back then, but over the years the decomposing of sewage weakened the concrete, Westfall explained.

“Essentially, it came to the end of its useful life,” he said.

Millherst Construction was awarded the contract last fall and, originally, the nearly two miles of sewer line was to be completed by Jan. 6. The entire project will now be done by July 1, which includes the restoration of property, pavement and ditches where work was done.

“During the process, a number of issues arose when underground utility lines we did not know about caused us to readjust our line around them. We then found a Verizon line that forced us to occupy land that belongs to the New York State Thruway Authority, so it took time to obtain that easement along with additional time needed for easements to use some private property,” Westfall explained.

The station 8 pumping station on East River Road collects sewage from all residents south of the 190 and it continues to be pumped to a large 30-inch gravity sewer interceptor on the north side of Whitehaven Road, adjacent to the solar farm. From there, it flows by gravity to the sewer treatment plant near Buckhorn State Park. There is also a force main pipe from station 17, located near Burger King, that goes up Staley Road to a connector at Stony Point Road before connecting to the new force main. Pump station 17 collects sewage from Burger King to north of Webb Road along Grand Island Boulevard.

“The old line continues to operate,” Westfall said. “We now have the entire new line in place so the next steps are pressure tests and transferring connections at the existing pump stations. Once we do that, the existing line will be abandoned.”

Westfall said that, when a project like this is being built and the town will own it, a consultant is hired to oversee all aspects. Because the contractor was unable to meet the original contract deadline due to weather, easements and now COVID-19 delays, the Grand Island Town Board on Monday unanimously approved an additional $97,000 for construction administration and inspection services.

Westfall said he remains confident the entire project will come in under budget.