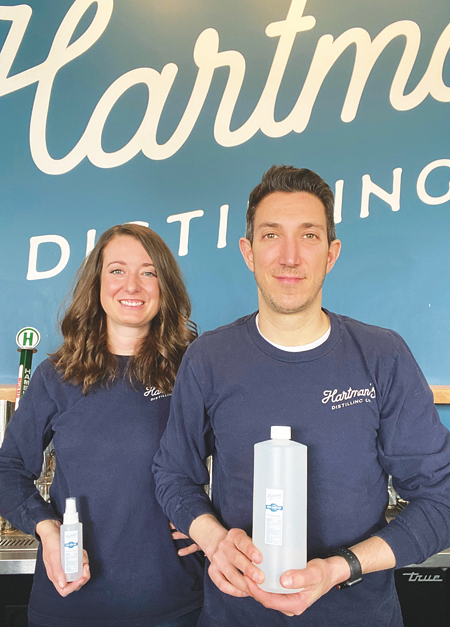 The family-owned and operated Hartman’s Distilling Co. on Chicago Street in Buffalo, which normally focuses on the production of bourbon, rye, vodka, gin and craft cocktails, has shifted much of its production to bottles of hand sanitizers because of the COVID-19 crisis. In addition, it is donating one bottle of hand sanitizer for each one it sells.

Jen Hartman, a 2003 Grand Island High School graduate, who grew up on the Island and who founded the distillery with her husband, Justin, did not forget her hometown when she recently delivered six quarts and 10 four-ounce spray bottles to the Grand Island Police Department.

“I cannot say enough for these businesses who have taken care of us in such a big way,” said Robert Rine, the department’s officer in charge. He said the donations came at a perfect time, because Supervisor John C. Whitney, P.E. sent a directive to all town departments that staff must wear masks and all vehicles must be kept clean at all times.

Rine said the town’s police force is required to wipe down the interior of each car before and after each shift.

He has also been able to share some of the donations with the Erie County Sheriff’s Department, the island’s primary police department, which shares space in the Whitehaven Road headquarters.

“We use these hand sanitizers all the time, especially in the office,” Rine said. “We are so grateful to the Hartman’s and Ace Hardware for this donation and to Tops for the much-needed wipes.”

Jen Hartman’s uncle and aunt, Bob and Lisa Hobba of Grand Island, are co-owners, and her parents also help out at the distillery frequently.

“So far, we have donated more than 1,000 bottles of hand sanitizer to over 30 local organizations,” said Hartman, who noted the donations will continue as long as they are selling the hand sanitizers.

Bottles of Hartman’s hand sanitizer, along with bottles of bourbon, rye whiskey, vodka, and gin, cocktail kits, craft cocktails to go (available in single serve and a large bottles that serves 10 cocktails), and merchandise can be ordered online at www.hartmansdistilling.com, and can be picked up curbside at 55 Chicago St., from 4-7 p.m. Tuesday-Friday and noon to 4 p.m. Saturday. In addition, Hartman’s can ship hand sanitizer anywhere in the continental U.S. via its website.

During this COVID-19 pandemic, Hartman’s also offers private, live online cocktail classes, which can also be purchased and scheduled online.