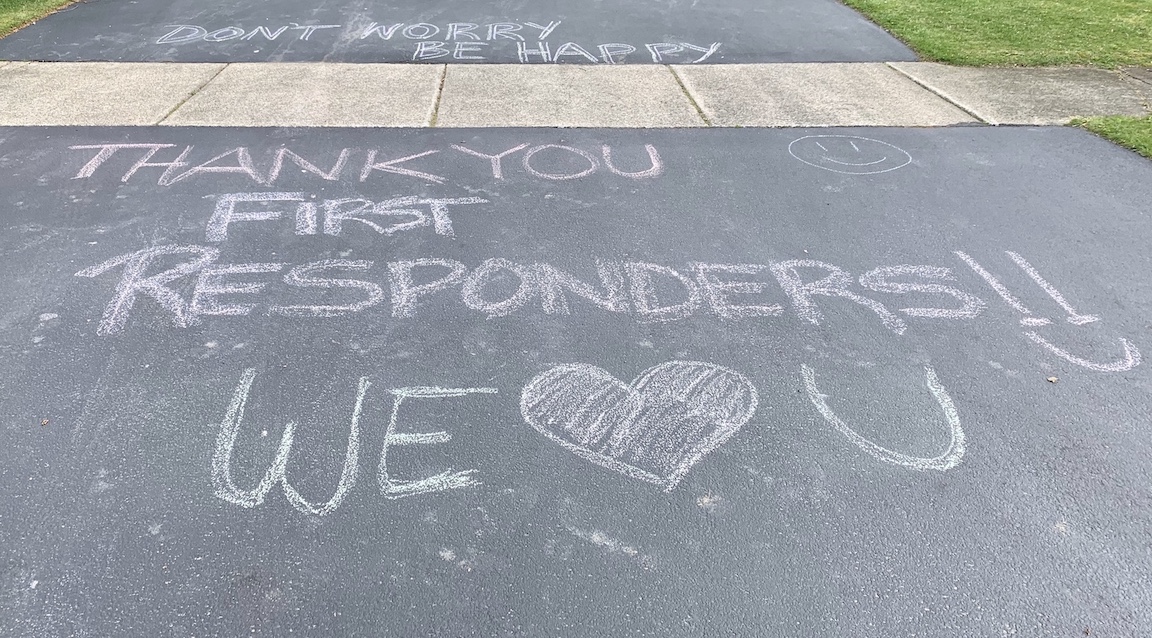 On Saturday, April 11, an Easter Bunny Parade was held in the Village of Youngstown. Parading through the village was Youngstown Police and Volunteer Fire Co., in accompaniment with the Youngstown Lions Club.

As we all know, many of our annual holiday celebrations were canceled this year, but this one took a turn for the better. Due to the inability to host the annual Easter egg hunt in town, an “Easter Bunny drive-by” was found to be a safer alternative.

According to the Youngstown Lions Club’s Facebook page, it had “received notice that the Easter Bunny is an essential worker.”

With many gathered outside their homes and in their respective driveways, of course, the parade began promptly at 1 o’clock.

Bringing pride to Youngstown’s first responders, this parade made for a great experience for not only its audience, but for everybody who was involved.

“Any time you go out into the public’s eye you always get a little sense of not nervousness, but urgency. You know, how we prepared for this, we never know what we should expect. Are we going to expect a big turnout? Are we going to expect a poor turnout? It’s always a little nerve-wracking before you get out there, but you see the smiling faces and it turns out to be really nice,” said Youngstown Volunteer Fire Co. Chief Greg Quarantillo.

“I was in the front of the parade, and all I could hear were sirens for two-and-a-half hours. It is loud,” he said with a laugh. “It’s probably one of the best feelings in the world knowing you can go out there and the silliest of a little parade could make so many peoples’ day. It’s actually very rewarding.”

Travelling through the most populated streets of the village with sirens blaring, it made it difficult for civilians to not want to join in on the fun.

“I wasn’t sure how many people were gonna be out,” said Colin Campbell, the Niagara County Fire Service Association’s 2019 Fireman of the Year.

“I could tell we were making a lot of noise. I was setting off the siren on M1 and I could hear the federal Q siren going off on engine 2 behind me. It’s a little bit quieter inside the vehicles than it is outside, but not by much,” he said with a laugh. “It was really awesome to see the people coming out into their driveways and being happy. It was just a lot of fun to get out of the house and drive around and make a bunch of noise for a couple of hours.”

With ribbons of hope around trees and words of encouragement inscribed in chalk on driveways (as pictured), it was easy to feel the same amount of pride in the community that was felt by the first responders.

“We just made a hell of a lot of noise through the village to let people know that we’re for them. I didn’t think about it at the time, but that’s what we did,” line secretary and interior firefighter Jim Panton said. “I got choked up a couple of times. There’s a sense of pride in it all. I am just a little wheel in a big cog of this whole village.

“A lot of people would come out, and they would wave, and it just meant the world. We can’t really get together right now, but we see you’re there. It felt pretty good. We had a lot of supporters.”

Youngstown’s residents had much to say about the event, as well.

“It was a really special event,” Annette Sargent said. “The fact that the community was able to come together at a time like this, despite the circumstances, it was really something. It was touching. To see the messages written, the banners, and all the kids gathered outside having a great time, it made your heart melt.”

Keith Sargent added, “Like she said, it really was special. It was reassuring to know that our first responders are still here for us. They’re putting their lives on the line every day to help us and to protect our loved ones. It’s all we can really ask for. It restores our hope, I think.”

During a global pandemic, hope is the last thing that should be left to the wayside. It is important to remember the things that bring happiness and joy as this “new normal” is navigated.

While hope is something that feels as if it has been dwindling, this parade was a great reminder of the hope a tightknit community can bring. Giving thanks to Youngstown’s first responders with the enjoyment of a visit from the Easter Bunny was enough to take minds off of this hectic time by putting a smile on a lot of faces and hope in a lot of hearts.