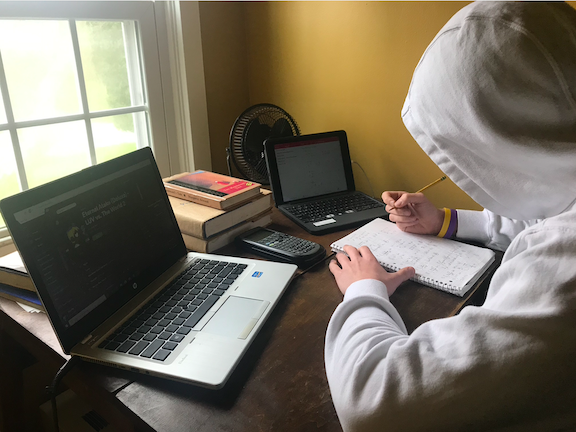 Students adjust to the new normal working from home.

COVID-19 and its effect on college students

COVID-19: The disease that has changed society as we know it. Nobody really knew what to expect when the Centers for Disease Control confirmed the first case in the U.S. on Jan. 14, least of all college students.

In fact, within the first week of there being confirmed cases in the U.S., many college students across the country were only just returning to their campuses to begin their spring semesters. Other college students were even sent home on spring breaks in March without any indication that they would not be returning to campus the following week.

One such student is Morgan Merriman, a freshman at University of Pittsburgh in Pennsylvania, whose spring break started on March 8.

According to the CDC, the number of confirmed cases in the U.S. on March 8 was 422. By the end of Merriman’s spring break, a week later, the count had reached 3,471 cases nationwide, over eight times larger than the count at the start of the week.

With the numbers quickly rising over the course of the week, University of Pittsburgh (affectionately known to the students as Pitt) wasted no time in coming up with a plan. According to Merriman, an on-campus resident, students “were given the option to stay on campus if we had no other place to go, but we were strongly encouraged to move out.”

At Pitt, students were even “assigned a moveout date the week following spring break,” Merriman said. She moved out of her suite-style dorm on March 16, the same day her classes were supposed to resume.

According to Merriman, Pitt is even offering students a refund for their room and board fees. The amount refunded to each student was based on what percent of the semester remained on the day they moved out. Merriman said she was given a 36% refund. “I also received a partial refund for my parking space.”

For more information regarding University of Pittsburgh’s COVID-19 response

Information regarding University of Pittsburgh’s refund policies for expenses and fees, FAQ

Unlike Merriman, Will Lewis, a freshman at Hobart & William Smith Colleges in Geneva, New York, still has not been able to move out of his dorm. Lewis said, “About half of my stuff is still in my dorm, including most of my shorts and T-shirts, as well as sentimental items, but nothing essential.”

At the time Lewis went home for spring break on March 13, he still did not know if he would be returning to campus. Up until that point, Lewis said, “The plan was to offer both an online and in-person option after break,” but “just after I left campus, they changed the decision to go solely online.”

While Lewis appreciates his school “was considering the agency and safety of students and faculty the entire time,” he also acknowledged that knowing the final decision of the school prior to the afternoon he left campus “would have allowed me to bring home more items that I want or need,” and “saved me the stress of trying to decide if I was going to return after break.”

With stay at home orders in both Pennsylvania, Lewis’s home state, and in New York, Lewis said, “So far, my family and I have decided that it is not an essential trip, and per state guidance, we should not go.”

According to CNN, the stay-at-home order is not set to be lifted until at least May 15.

Despite the anxiety that comes with not knowing when he will be able to collect the rest of his items, Lewis said his school is “offering a lot of options to students” and it has been “checking in on the rooms periodically to make sure that things are still there.”

Information regarding Hobart and William Smith Colleges' response to COVID-19.

Not all students are faced with the challenge of moving out.

Natalie Armstrong, a student in her fourth year at West Chester University in West Chester, Pennsylvania, lives in an apartment just off campus.

While she does not have the stress of moving out or not having all of her items in the midst of COVID-19, Armstrong faces other complications.

As West Chester University has gone completely online until at least the end of summer sessions, many of Armstrong’s classes have undergone a major shift.

Armstrong noted, “Laboratory and field sections of all my classes have stopped completely.”

As a biology education and integrative biology dual major, Armstrong said she has concerns about how the coronavirus will affect her ability to earn her degree.

“If it continues, I worry about my student teaching, classes where I have to be in a lab, and internships I need to graduate and/or apply to graduate school,” she said.

For many students, the switch to online learning formats means course content has been reduced or drastically changed. Both Merriman and Armstrong said they have experienced this to some extent.

In addition to the already reduced course content, many students and professors have struggled with the transition to online learning.

Merriman said one of her professors “wasn’t communicating with us very well in the beginning and she was not giving us lectures in a timely manner.” In addition, the same professor “gave us way more homework than we would typically be given and she very obviously made our exam more difficult.”

According to Lewis, the difficulty lies in the reduced amount of time that students have to interact with their professors. He said, “None of my classes are meeting as often as we did while on campus, and I feel it is somewhat harder to talk to my professors face to face.”

Lewis acknowledged “they all offer Zoom office hours,” but that it is “extremely awkward calling into them.”

Despite this, Lewis appreciates that “most of my professors have made themselves more available than usual for students to talk to, not only about class, but just to talk to another person.”

These schools are also working hard to give students the support they need from a distance.

Merriman said, “The university has counseling services online for any students that may need or want them” and that she has “been able to keep in touch with a doctor I was seeing at our Student Health Center over the phone.”

In addition to these services, Lewis said his school has even “set up an emergency relief fund to help those families who are struggling financially with students unexpectedly being at home,” in addition to the 50% refund on room and board that all students are already set to receive.

Ultimately, Merriman, Lewis and Armstrong all feel their respective schools have done relatively well in handling the pandemic.

Merriman said she feels her school “has handled the coronavirus well, especially in comparison with some other schools I have heard about.” She added, COVID-19 “may benefit my future plans, as Pitt has put their summer classes online. So, I may be able to take a class through them that I would not have taken over the summer if classes were still in person.”

Lewis concluded, “I am extremely grateful for the kindness and compassion that my professors and the HWS faculty are showing to the students, and I hope that other students are having similar experiences with their professors.”