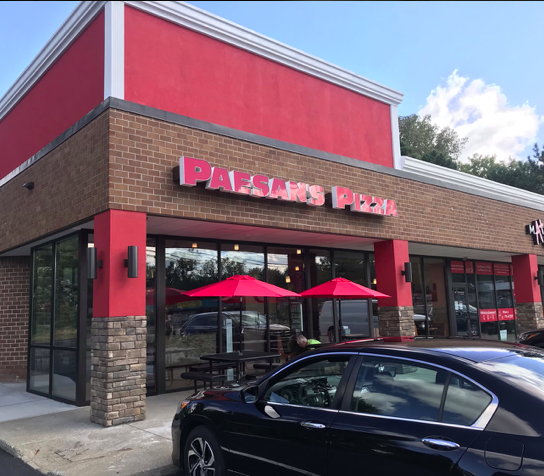 Paesan’s Pizza and Death Wish Coffee have gotten their names out to Barstool Sports and Dave Portnoy’s pizza reviews, package unboxings, and now even more

Ideas of sending gifts have paid off

“One bite, everybody knows the rules.”

Any person who knows a little bit about what Barstool Sports does understands this is the classic slogan Barstool’s founder, Dave Portnoy, uses before he takes a bite and reviews a pizza place he chooses to visit.

For nearly a decade, Portnoy has traveled around the country for his Barstool business ventures and has reviewed numerous pizza shops along the way. The Barstool offices are located in Manhattan, so many of these reviews have happened in and around the New York City area.

But as the country deals with the COVID-19 pandemic, Portnoy has had to deal with the hard fact that quarantine does not come with on-site pizza reviews.

So what happens to this piece of original Barstool Sports content now since the normal way isn’t an option?

Portnoy can’t get out to pizza shops and review, so the pizza shops now send product to him. Multiple shops have sent in their frozen pizza and, day after day during the quarantine, Portnoy has been reviewing and scoring the pizzas he receives on a 1-10 scale.

One Capital Region pizza business, Paesan’s Pizza, was fortunate enough to be featured in a review, leading to a positive impact for the business. This is known as the "Portnoy Effect," where a pizza shop sees a rapid increase in sales after its pizza is reviewed.

The owner of Paesan’s, Frank Scavio, said he was excited the eatery was able to expand its business, even during unfortunate times for most businesses.

“We are ecstatic, and I’m actually running around securing ice packs and shipping supplies. I just finished building the online store. So, a new, exciting start to a new chapter,” Scavio said.

Less than two weeks prior, Paesan’s sent out a pizza, but it didn’t stay frozen long enough due to the lack of Portnoy’s freezer space in his apartment. As such, he couldn’t eat it. “Paesan’s Pizza … DEAD!” Portnoy said when going through the frozen pizzas that didn’t make it.

Paesan’s was successful the second time when its box made its way to Portnoy during “Unboxing VI” on April 10. On April 17, Portnoy finally reviewed the pizza and he scored it at a 7.1, which landed the pie in his Top 10 out of roughly 30 frozen pizzas he had reviewed at the time.

After that, Paesan’s dealt with the “Portnoy Effect” and sold out at all the local grocery stores where it distributed the frozen pizzas within a day. Online traffic was so high that the website crashed the night of the review.

Now, the online store is up and running, and people all around the nation can get their hands on a Paesan’s pizza.

So, what is an “unboxing” and how did Death Wish Coffee get involved?

When Portnoy originally received packages with frozen pizza, one of the boxes with his address on it was exposed to everybody who watched the video, allowing for thousands of packages with pizzas – and a lot of other gifts from fans – to make its way to his Manhattan apartment. (The address will not be released here; sorry.)

Death Wish is based out of the Saratoga Springs area and distributes coffee to various grocery stores across the Capital Region.

It caught onto sending Portnoy product earlier than other food and beverage companies/businesses. Death Wish gifted Portnoy a bunch of coffee.

The reviewer would later become tired of receiving these types of gifts. Rather, he saw the original pizza unboxings to be an opportunity for the “little guys” to get their names out there.

Considering this, Death Wish earned enough respect from Portnoy and Barstool to team up and be the official sponsor for unboxings and at-home pizza reviews. People can use code “DAVE” at checkout on the Death Wish website to earn 15% off of their purchase.

Portnoy came up with an interesting slogan when promoting the company in his videos, citing the brand’s highly caffeinated beverages.

“Death Wish. When you can’t get cocaine, you get Death Wish,” Portnoy said.

This isn’t the first time Death Wish has been part of something big. Death Wish won a public vote out of 15,000 small businesses and the right to have a free ad in the 2016 Super Bowl with the help of Intuit Quickbooks. This led to a quick increase in popularity after the brand was seen by roughly 167 million viewers.

Both Paesan’s Pizza and Death Wish Coffee were together during Portnoy’s pizza review. Paesan’s was getting reviewed and Death Wish was the presenter, making it a Capital Region highlight for those seven minutes. Local people/supporters in the area were able to see the local businesses they love in the spotlight, and it allowed a national audience to become familiar with them, as well.

In fact, Scavio said he believes if Portnoy didn’t drink Death Wish coffee before eating the pizza, a higher score might’ve been there.

“I can’t sleep. A swig of Death Wish Coffee before my one bite review is keeping me up. Who does that!” a sarcastic Scavio said.