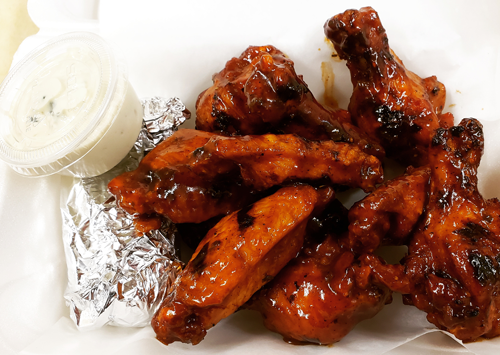 For the Mallwitz family, who have owned Mallwitz’s Island Lanes, recreation center and restaurant at 1887 Whitehaven Road for 40 years, “March Madness” is a welcomed revenue stream to accompany its bowling business.

For as long as Mike Mallwitz can remember, the NCAA Men’s Basketball Tournament meant crowds of fanatic sports fans huddled around the alley’s many television sets intently watching games with their bracket sheets close by and a bucket of chicken wings and their favorite beverage in front of them.

On March 11, Mike was dealt one of two major blows from the COVID-19 pandemic when this year’s 64-team tournament was cancelled. Five days later, restaurants and bowling alleys, among other businesses in the state, were told to shut their doors.

Takeout service was their only option and, for the Mallwitz family, long-time successful competitors on the bowling alleys, they accepted the setbacks and created a game plan for a takeout-only business.

Lucky for them, Mary Mallwitz, who, with her husband, Art, founded the bowling alley and restaurant, decided this year to join the many Island restaurants offering fish frys in Lent to help their Friday business. The family business, which also includes daughter, Kelly, with other family members helping when needed, has always been known among bowlers and Islanders for its outstanding chicken wings.

On Wednesday, March 25, life began to change tremendously for Mallwitz’s Island Lanes and its chicken wing business when Mike’s friends, Tim Shantler and Pete Aronica, called to say his wings were in a Buffalo’s Best Chicken Wings tournament on Twitter and they were getting smoked, down 77% to 23% against Doc Sullivan’s Irish Pub in South Buffalo.

Mallwitz, 40, who grew up in the family business and is one of the area’s top bowlers, is active on social media and immediately found the contest at Barstool Buffalo Online (@BuffsBartstool), a direct affiliate of @BartstoolSports. Suddenly, his competitive juices took over.

“Not knowing how we even got onto the list or how it worked, and knowing Doc Sullivan’s is a very popular place, I just threw it out on my social media sites asking everyone to vote for us,” he explained. “We caught up in the final two hours, pulled ahead, and won to advance into the second round.”

Barstoool Buffalo had a field of 26, with Mallwitz Lanes its 21st seed. Immediately after its victory, round two voting began against Kelly’s Korner Bar & Grill in North Buffalo.

“We have such a loyal following on social media that they all shared the news and, against Kelly’s, we took an early lead and never looked back,” Mallwitz said.

“Suddenly, our percentages began to climb and then we pulled away for what I consider a very surprising victory,” he explained.

The win launched them into the “Final Four” against The Bar-Bill Tavern in East Aurora, an extremely popular spot for wings, which states “Jumbo Wings were not created here but they were perfected here” on its website.

Mallwitz, who gives Bar-Bill’s wings a thumbs up, was winning by a large percentage when he said Buffalo Wing Geeks, a private Facebook Group with over 1,000 members, posted that a bowling alley on Grand Island was beating their favorite place and asked its members to “please vote for Bar-Bill’s.” Mallwitz narrowly won and advanced to the finals two days later on Monday, March 30, against Elmo’s Bar & Restaurant in Getzville, which promotes its award-winning wings on its website.

“We knew we were up against a very strong competitor, so we began our strategy of contacting everyone we knew from the bowling world who knew about our wings and past customers. We needed every one of them because, when voting began at 4 p.m. Sunday, it was neck and neck right up until the contest ended at 4 p.m. on Monday,” Mallwitz said.

Since the restaurant is closed on Monday, the entire family spent the day texting each other the latest score while each continued to contact everyone they knew with messages to vote.

To show the class of this family, on the evening of its victory, Mike’s nephew, Sean, called and ordered 100 wings from Elmo’s. Elmo’s also posted on Twitter after the contest: “We had to try @islandlanes & see what all this hype is all about…and they lived up.”

As the Best Wings in Buffalo champion, there was no championship trophy presentation and no parade down Grand Island Boulevard. But for the past two weeks, Mallwitz takeout business for wings has gone viral.

The championship has also caught the eye of Buffalo’s Official Wing King, Drew Cerza, founder of the National Buffalo Wing Festival, who admitted he had never heard of the Mallwitz Lanes’ chicken wings.

“Mallwitz Lanes reminds me of Tom Brady, who was a seventh-round draft selection. You just never know,” Cerza said in a phone interview.

“They are now on my radar,” he added. “When we can, I will visit them to see if their wings deserve an invite to the 2020 Wingfest over Labor Day weekend at Sahlen Field.”

Chris Musial, vice president and general manager of WBBZ-TV, host of the “Beat The Champ” television series, knows Mallwitz Lanes very well, as a site of many tapings. Mike, who carries a 235 average and has rolled nearly 60 perfect 300 games (and 20 800 three-games sets), has won three “Beat the Champ” titles.

"One of the first things that strikes you when you walk into Mallwitz's Island Lanes is the excitement in the air and camaraderie among the folks who are either enjoying bowling, conversation and jokes at the bar, or the great food in the restaurant," Musial said. "Part of the fun is seeing what kitchen special Mary Mallwitz and their chef is creating. The ‘Beat The Champ’ crew has always enjoyed their famous chicken wings when we are there!"

“The first thing is we tell our food distributors we only want the largest jumbo wings they have, and we do not settle for less,” explained Mike, who said his mom inspects each delivery. “Cook time is the key. We take our time to make sure the wings are crispy or perfectly barbecued, and we always have fresh oil in the deep-friers.”

The wings have the option of 12 different flavors and heat levels, and can be deep-fried or grilled on the pit. They are served with celery and blue cheese dressing.

“We would never serve ranch dressing, nor do we cut our blue cheese,” Mallwitz noted.