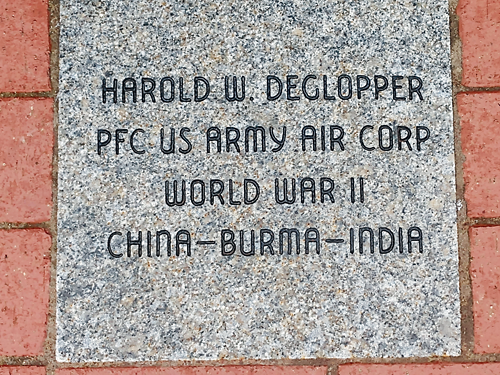 The elaborate unveiling and dedication on June 6 of the life-sized statue of Grand Island’s United State Army World War II hero Charles N. DeGlopper will be postponed because of the COVID-19 pandemic.

The project was on schedule until the pandemic closed the foundry in Colorado where Youngstown sculptor Susan Geissler was having 13 key pieces of the 6-foot, 7-inch statue cast. The pieces would have then been reviewed and approved by DeGlopper’s nephew, Ray, and family members to ensure the likeness of Pfc. DeGlopper was perfect. Upon their approval, Geissler would have completed the statue in plenty of time for the June 6 event.

“We made a very tough decision to postpone the unveiling until June of 2021, but you really cannot have an elaborate unveiling of a statue without the statue,” explained Eric Anderson, chairman of the DeGlopper Memorial expansion committee’s board of directors. The committee was to meet Thursday night to finalize the June 2021 date and the next steps in the process.

For Grand Island’s Ray DeGlopper, a member of the committee’s board, the news is bittersweet.

“When no one is around, I walk the park and have watched in awe the work that is going on. Our family is so impressed by what we see, especially now with the Gold Star bricks around what will be the Charles N. DeGlopper statue,” he said. “Sure, our family was looking forward to this event in June but, by putting it on the back-burner for one year, it will allow all of us to get everything done at the park so we’ll be completely finished for the final unveiling. Also, another year will give us plenty of time to extend the invitation to dignitaries and top military and political officials.”

Grand Island Supervisor John Whitney, P.E., said, “While we are deeply saddened by having to postpone the dedication ceremony, the safety of our citizens is paramount. I think, when this pandemic is over, we will have a deeper appreciative for ceremonies like this one.”

Anderson said the board and committee will take advantage of the additional year to finish work on the park while the town completes sidewalks and street lights. He said it will also allow them to complete their fundraising goals.

One way for people to donate is through the purchase of three different engraved brick or granite pavers, which are currently being put in place around the monument site.

Dan Drexelius, owner of Double “D” Construction on Grand Island, is the project manager and is on the site all hours of any given day with members of his team. Much like he led the team that built the Miracle League Field in Veteran’s Park, this project has become a labor of love and honor for Drexelius. While disappointed he will not see the most elaborate celebration in town history occur in less than two months, he will now focus on completing the fundraising goal.

What impresses the entire committee is that the park will be more than just a tribute to DeGlopper, a soldier who posthumously received the Medal of Honor, the highest award given by the United States military. He gave his life in the Battle of Normandy campaign during World War II.

Located at the intersection of Baseline Road and Grand Island Boulevard, the DeGlopper Memorial Park will honor and recognize all Grand Island residents past, present and future who have proudly served this country as a member of the military. The expanded site will include a memorial to all branches of the Armed Forces. In addition, the Gold Star of bricks around the statue was set in place to honor the Gold Star Mothers.

“Our veterans deserve a park they can be proud of and they will be proud of this park,” Anderson said.

The park will be a learning experience for kids and for people to be able to see family members’ names on a wall or pavers. It will be a place to learn more about Charles N. DeGlopper and a list of others who gave their lives for our freedom, but also a place for members of the Grand Island community to return thanks.

For more information, or to donate, visit www.degloppermemorial.org.

Due to the unforeseen circumstances related to the COVID-19 pandemic, we regret to announce the postponement of the dedication of the DeGlopper Memorial Expansion from June 6, 2020, to June 5, 2021. We feel that this decision is in the best interest of public safety.

The DeGlopper Memorial expansion committee would like to extend its sincere thanks to the Grand Island community and all who have provided support. The memorial honoring the brave men and women who have served our country and those who have made the ultimate sacrifice will be one that is of major historical significance for our community. We look forward to your continued support as we work toward the completion of this project.

We assure you that our work to complete the project will continue as we are permitted to do so within the New York state guidelines for construction.

We invite you to visit the website at www.degloppermemorial.org for updates on the memorial, as well as opportunities to continue to help support our mission.