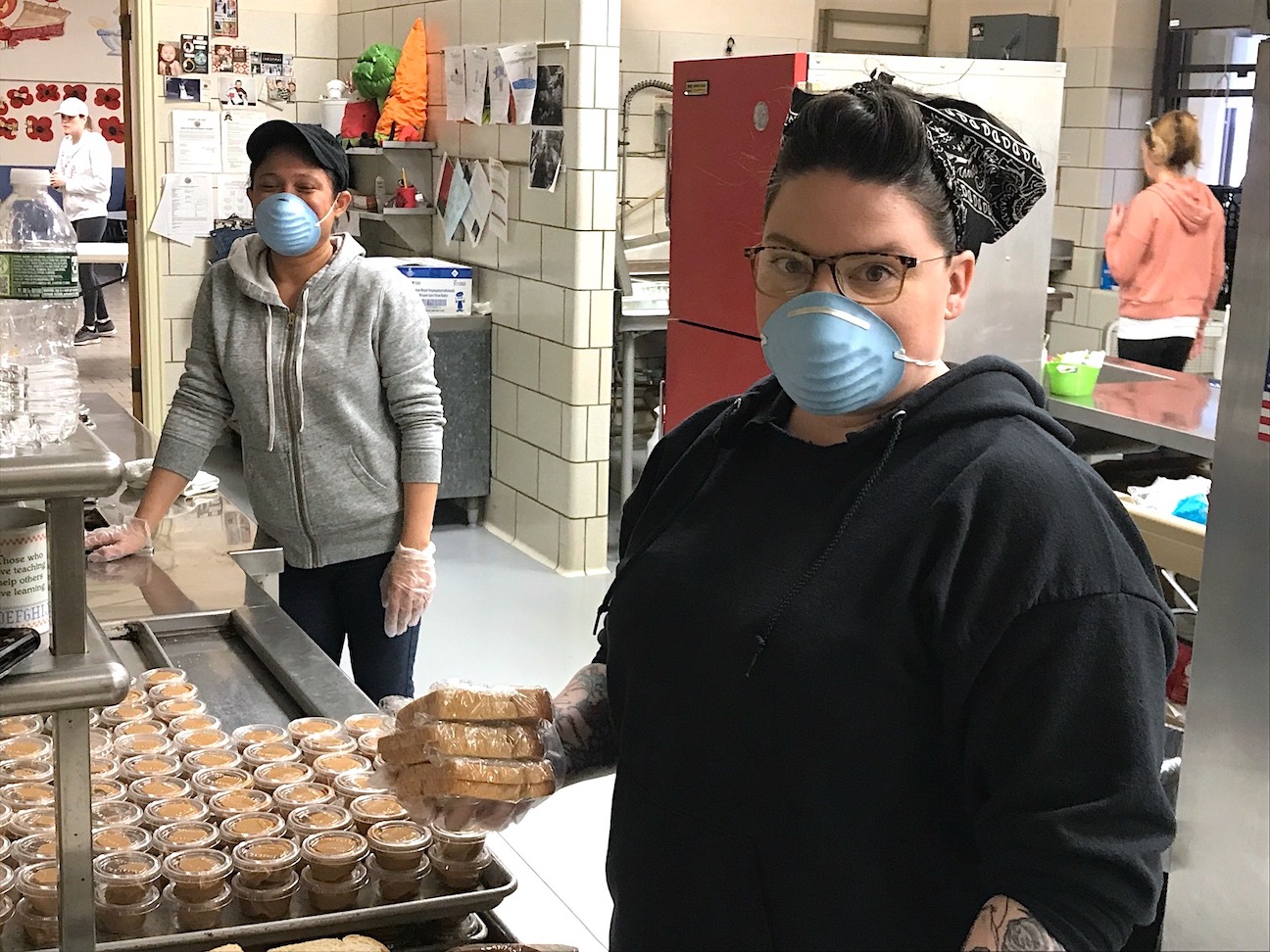 From left, Mi Mi and Ariel Fulbright prepare sandwiches in the kitchen at Sidway Elementary.

Important advance planning by Grand Island Central School District administrators, along with dedicated, hard-working food service staff and volunteers, has resulted in the uninterrupted distribution of breakfast and lunch to thousands of students since the COVID-19 pandemic closed schools last month.

On the morning of Friday, March 13, Superintendent Brian Graham, Ed.D., and Dr. Rubie Harris, assistant superintendent for finance and support services, convened a meeting with Patrick Smith, the district’s food service director. The pandemic was in its early stages and school was still operating as usual. Schools would be closed the following Monday for a Superintendent’s Conference Day.

Smith, is in his third year as food service director after 10 years of overseeing meal preparations in the health and assisted care field, was asked to create a plan if schools were forced to close.

“By the end of the day, we had our plan. When the county executive announced on Sunday all schools in Erie County were closing on Monday, our district announced later in the day we would close until late April,” Smith explained from a safe distance. He was working with his team to prepare breakfast and lunch for students in the five Grand Island schools, and lunch for the St. Stephen’s School students.

Their first order of business was to use the district’s website and electronically send questionnaires to parents advising them of how their student could receive the meals, asking if they had any specific food allergies and if they would like it delivered or they could pick it up. A team worked on putting the data base of information together while Smith had the district’s food service employees meet, with all the food supplies from their schools, in the cafeteria of Charlotte Sidway Elementary, 2451 Baseline Road.

Sidway became headquarters for “The COVID-19 Alternative Grand Island School Meal Program” with 13 staff and volunteers working from 7 a.m. until 2 p.m., wearing gloves and masks and working in a socially distant assembly line to fill paper bags with breakfast items, as well as fresh fruit, juice, milk, sandwich and a snack for lunch. This follows the state meal requirements for schools.

Theresa Alizadeh, the district’s transportation supervisor, arranged four buses and drivers to transport teachers and staff who deliver bags to student homes by knocking on the door and leaving the bag without any interaction with student or parent. The team averages 70 deliveries with meals for two days and to several houses that have more than one student residing there.

“We are taking every precaution we can to prevent exposure,” Smith explained. “I just cannot say enough about the team I have here. They are all going above and beyond, and I am so proud of them. It has also been great working with transportation department on this project. They have been very accommodating.”

The district’s meal distribution to the Island’s thousands of students has not gone unnoticed. Smith said they have received so many compliments from parents since this began, including many who now find themselves unemployed.

“It is just fantastic that our students, who are now able to use technology to learn at home, are receiving daily meals from the district,” he said. “Once again, it just shows how our great community is pulling together, and God bless the staff and volunteers who are putting their lives on the line to help prepare and deliver these meals.” 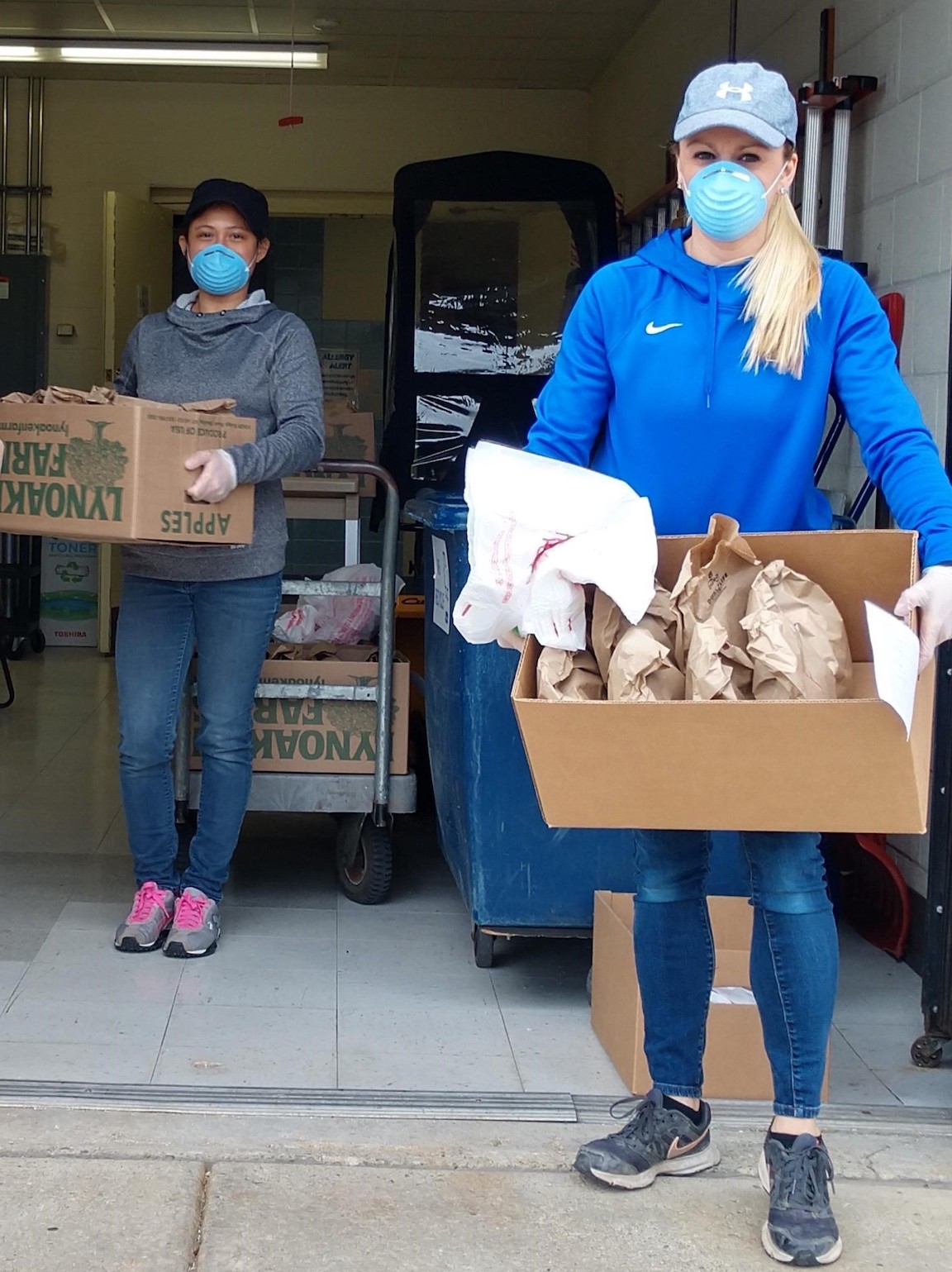 Transporting boxes of meals to be delivered from Sidway to the buses are, from left, Mi Mi and Carley Antonelli.