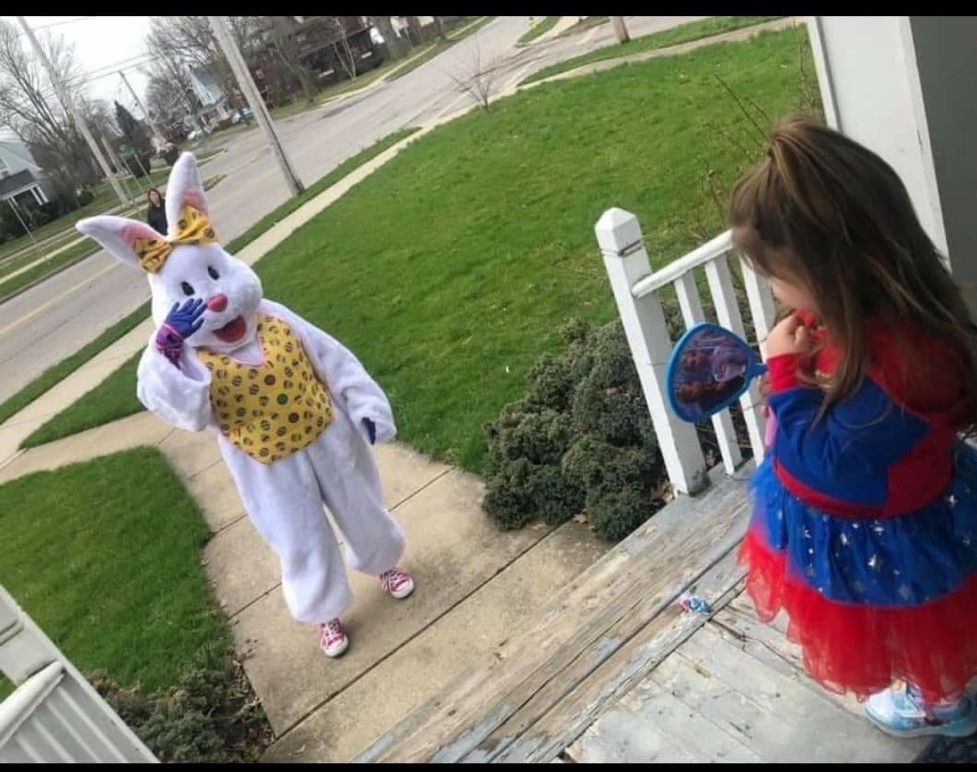 The Easter Bunny pays a surprise visit to a local child. (Photo submitted by Gina Streck)

As everyone knows, life has been a battle for many due to the COVID-19 pandemic. Life has essentially been paused and ways of living have changed. Happiness is tough to find during times like these for humans of all ages, but one Niagara Falls resident “hopped” out of her way to bring some cheer to some local youngsters.

Gina Streck, a hairdresser at Salon Diaz, took matters into her own hands to spread some smiles this past week. With one of her favorite holidays of Easter coming up, Streck did drive-by visits to local children in the area dressed up as the one and only Easter Bunny.

Originally, Streck’s idea stemmed from an April Fool's Day prank she played on her two kids. Once she was able to put all the pieces together, the small idea grew into an even greater feat where the community became involved.

“Originally, I kind of played a joke on my 8-year-old for April Fools, and I was like, ‘Oh, you guys have school tomorrow,’ and he got really upset. Then I told him I was just kidding, ‘April Fools,’ and then he was like ‘My whole life is over; no baseball, no Cub Scouts, no school.’ So, I had a real bad guilt for making him feel so sad,” she said. “Then, the next morning, my daughter was like, ‘When are we going to the store to see the Easter Bunny?’ And I told her that we’re not, because the store’s closed. Then it hit me. I was like, ‘I’m getting an Easter Bunny outfit and I’m coming here.’ I made that my mission. … So, my kids being sad and kind of lonely, they were definitely my inspiration for being a bunny.”

Once the idea struck Streck, she began to search for Easter Bunny costumes online, with little luck. In the midst of her search, Streck remembered that her daughter’s LaSalle Early Childhood Center had an Easter Bunny costume and she said she quickly reached out. The center had no problem handing her the costume. Streck said with a laugh, at 5-feet-tall, it took some time getting used to the costume.

While her mission was to surprise her children with the costume, Streck’s time as the Easter Bunny was just getting started.

“I texted my best friend who also has a 5-year-old daughter who was also pretty bummed about not seeing the Easter Bunny. So I told her I got an Easter outfit, and she was like, ‘You’re kidding me?’ So I said, ‘Give me a few minutes and I’ll be there.’ … At first I was just going to show up to my house and be like ‘Hey, guys!” And, I live in DeVeaux, so I just said I’ll throw it on my Facebook. I figured I would just walk the streets and see my son’s baseball teammates and a couple of my little girl’s friends,” Streck said.

Little did she know, though, the venture would end up being more than just walking the streets of DeVeaux. Soon, requests began piling in to visit areas all over the city. The Easter Bunny’s curbside visits started on Sunday and continued up until Thursday.

And, like a true Easter Bunny, she didn’t come empty handed. From a safe distance away, Streck waved to the surprised children and tossed some Hershey Kisses to them.

“I figured Hershey Kisses would be perfect being that a bunny gives kisses, not hugs,” Streck said. “So I had a little Easter bucket and I would go to the children’s house and they would kind of stand in the doorway and I would throw them candy. Everybody kept their distance.”

In times like these, it’s hard to find happiness when there’s a plethora of things going on in the world. By dressing up in the Easter Bunny costume, Streck said it’s important to bring light when times are dark.

“I think it’s really important. Every time you turn on the news, or even look on Facebook, it’s breaking news and COVID-19 everywhere you look and (I said), ‘You know what, I’m breaking this up a little bit.' We have to have something that’s happy and light and just gets everyone’s mind off of it, because it is a heavy time. It’s uncertain, nobody knows what the new normal is going to be. … So, I’m like, ‘You know what, no. We’re going to bring this back to some fun and lightness and positivity,’ ” Streck said.

Additionally, Streck said she hopes her actions inspire others to do something to help spread happiness and positivity.

“It’s (good) to just be nice and thoughtful right now for other people. If I can inspire someone else to do something fun and happy, then that’s great,” Streck said.

With Easter approaching Sunday, Streck said the Easter Bunny costume is currently retired for the year. She added on Facebook, that she wishes well for everyone and that she hopes people enjoyed her time as the Easter Bunny.

“I hope everyone enjoyed their Bina visits the last few days, this has been an absolute blast to do!!” she said on a Facebook post. “I just wanted to let everyone know she is now safely back in the rabbit hole with Bick bunny & their babies where she will stay until next year. 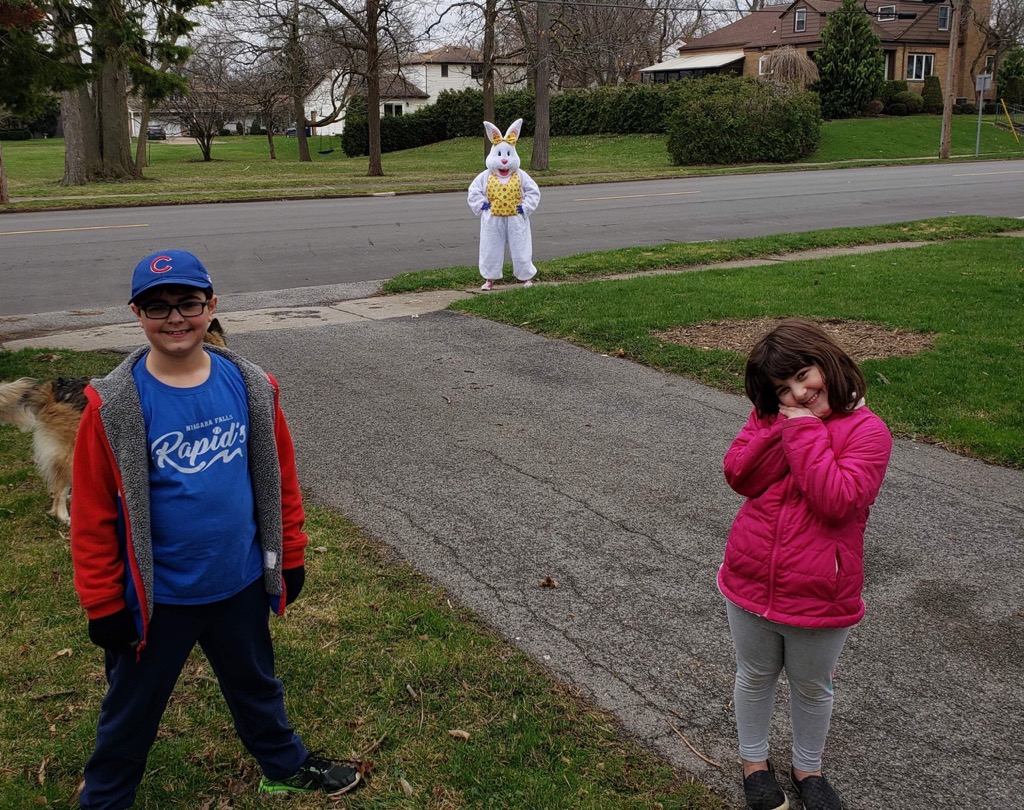 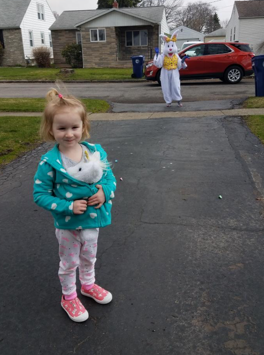 Isla Rowe and the Easter Bunny pose for a photo following a surprise visit. (Submitted photo)